Doing parallel production in HD/SDR and UHD/HDR is tricky, but worth it, according to Zagreb-based Croatel, which now offers UHD production, although there are still few customers for it in its region. Croatel covers all the major sports in Croatia and south eastern Europe, and 95% of its production is sports, although it is also aiming at concerts in UHD. It provided two trucks to the Rio Olympics, to cover men’s and women’s field hockey, and it was after that they decided they needed to upgrade to UHD.

“The UHD market still doesn’t exist. We are the pioneers,” as first in the south-east European market, 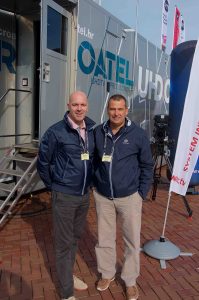 Croatel’s MD, Tonko Barac told SVG Europe at the IBC2017 Outside Exhibits area. He is establishing relationships with telecom operators, who will be distributing the signal to end-users. “We think that the future of UHD HDR production will be OTT applications, because the OTT approach allows us to approach the end users in the easiest way – compared to the expense of a satellite feed – and offers the possibility of a stream of up to 30Mbps to the consumer.”

It has a contract for the Croatian football league, and for handball, basketball and water polo for IPTV platforms and national broadcasters in Croatia – broadcasting in HD, but IPTV is beginning to move to UHD now, including HDR. “That is one of the advantages of OTT, because it is not a problem to deliver an HDR signal. We want to make a big step to both, to make a difference. The resolution increase by itself is not enough. 4K without HDR doesn’t make sense,” he said.

Since getting the truck almost a year ago, Croatel has been doing extensive trials in UHD, but no broadcasts yet, although Barac expects to start doing UHD to end users by the end of the year. “We are very well prepared for big projects, and can deliver any HD or UHD format,” including PQ or HLG. “We can make a lot of parallel HD/UHD HDR signals to broadcast simultaneously,” as the switcher can deliver two formats at once, he said.

Where there is a problem it is with sports. “EVS is the problem when you are making parallel production – you need to double the number of EVS machines,” so he would probably do down-conversion in that case. 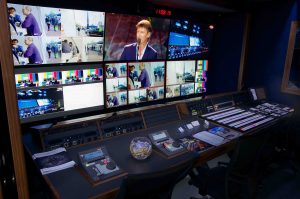 The production area and monitor wall inside Croatel’s UHD OB5

Even though they haven’t broadcast in UHD yet, Barac believes spending the time getting everything right “was very useful for us to learn about UHD HDR. It is now very easy for us to start with a production.” It was particularly important to get the parallel production right (HD/SDR and UHD/HDR) as “that was the biggest problem.”

“For the shaders/vision engineers it is very difficult to work like that,” added Edi Kristic, Croatel’s head of UHD production. “If you work only UHD you have no problem, but delivering two signals is a problem.”

UHD OB5 is pre-wired for 16 UHD cameras (or 20 HD), and has 14 Sony HDC-4300 cameras at the moment (two of which are high frame rate), all fitted with Canon lenses. “When we were buying, the 4300 was the only choice in the market that did UHD,” said Kristic. All of its other trucks use Grass Valley cameras. The Sony switcher was part of the package.

The Evertz system won on price and integration compared to its rivals, and they particularly liked that it is prepared for IP. “We don’t use IP at the moment as a transport, but it is ready. If we want to move to IP it is an easy job for us,” said Kristic. The signals in the truck use 2SI instead of quad link, as it is easier to implement. It uses Sony’s S3 Log LUTs for HDR.

At the heart of the double expanding sides OB is the Lawo VSM control system, “which is crucial. It helps us a lot to speed up the process when we switch multiviewers, etc,” said Kristic. “Without VSM it is almost impossible to control everything,” added Barac.

Lithuania-based TVC did the coachbuilding, wiring, and installation/integration, although Croatel did the design. It is the third truck built with TVC. “We are very satisfied with the end product,” added Kristic.

Its 32×32 KVM matrix, which does dynamic routing, is from Guntermann & Drunck and is proving 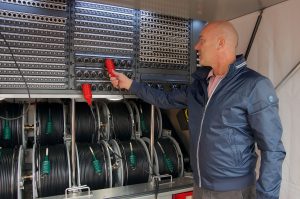 Making the connection: Kristic at the back of the truck, where each motorised drum has 350m of Furukawa fibre

very useful as it allows every workstation to be multifunctional for EVS, graphics or production, “which makes it a very flexible layout,” said Kristic. EVS operators can also be in a separate truck (if they need more than six) using a fibre link. EVS connections use a 10Gbps fibre network for UHD file transfer, as they needed a particularly fast network for all the data. “It is particularly important when you need to extract content from several cameras at the same time,” said Barac.

The master clock and digital glue is by Evertz, “but we didn’t need too many distribution amplifiers because we use the matrix for that.” There are 14 motorised drums at the back of the truck, each with 350m of fibre from Furukawa, with Lemo SMPTE connectors.

It also has a Riedel MediorNet system and Riedel 32×32 Artist intercom, and will probably add another frame to make it 64×64. “We use Riedel intercom on all our trucks,” said Kristic. It has four HD trucks – two Sprinters (up to eight cameras) and two large trucks (12-20 cameras).

“We are making about 400 sport productions per year in Croatia and the region,” said Barac, including a lot of UEFA matches, the women’s European handball championships and the Baku European Games. They plan to upgrade the dual-extending side HD OB3 to UHD using a similar design next year, although may use IP.