EVS wasn’t the only IBC exhibitor to feature esports athletes in action but its demo showed off the power of the DYVI production switcher, the company’s vision for IP workflows, and more. Nicolas Bourdon, EVS, SVP marketing, says the fit between a product like DYVI and the esports production community is a good fit, as the switcher was used to mix two mini-cam feeds with game feeds that are ingested on EVS servers. 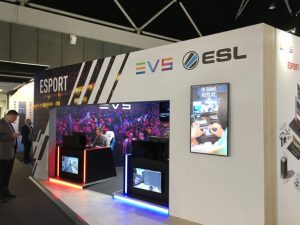 EVS featured an esports demo to show the flexibility of its technologies within the Esports environment.

“They don’t come in with pre-conceived ideas about what the switcher needs to be or if it is hardware based,” he explains. “We can come with new technologies and find that something like DYVI can meet their needs. We’re proud to see that.”

The switcher was used to show how different effects, logos, and graphics could be incorporated via DYVI and then distributed to Twitch, the online streaming site at the center of the esports universe, via IP Director.

“The user can access all of the data for things like position of the action, names, weapons, and then use that to log all of the content and create clips and highlights automatically,” says Bourdon.

Sebastien Verlaine, EVS, marketing and communications manager, says the newest tech on display at IBC was the PM-Z, a processing module that is designed for the remote production facility market and for those looking to virtualise multiple aspects of their production infrastructure.

“It can virtualize a number of back-end resources like database servers and give XT Access units more flexibility to scale up or down according to production needs on a daily basis,” says Verlaine. 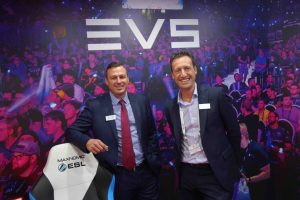 This was also the first IBC with the new VIA workflow platform on display and it was able to present a number of new features, like IP Director working with VIA Flow to facilitate the publication of social media on Facebook and Twitch.

“Customers using IP Director will have more reach and be able to monetize their content and towards the end of the year we expect to have more social networks,” says Verlaine.

Also on display was data integration courtesy of a partnership with Yepco. It allows for automated logging within the IP Director environment so that post production workflows with third-party software from companies like Adobe can become easier and more transparent (for example, HDR metadata can flow from EVS with the use of VIA Opengate).

EVS finds its customers weighing things like remaining in an SDI environment or making the move to IP.

“They have that flexibility with our servers and they can invest in something today, whether in SDI, IP, or continue to do HD, 1080p, or 4K,” says Verlaine. “And they can do that without reinvesting in new equipment three or four years down the line.”