Kevin Fitzgerald: “Gearhouse is ‘open for business’ in many many areas – that’s a key message for this show. Certainly the acquisitions of Input Media and Hyperactive Broadcast last year have given us a really broad reach and also the ability to do a different range of events including sporting events. 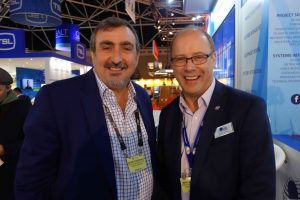 “Obviously, from a technology point of view, looking at the projects division and an expansion into North America, into the third tier of American sports with the Skye remi truck – that’s becoming a very big market for us. We will really be to make the business proposition that it’s cost effective to televise and stream some of these events.”

Martin Paskin: “At the moment we’ve got a couple of studio projects that we’re completing in news and sports – one for SABC in South Africa and a general-purpose production studio in Dubai. A lot of these places are still using traditional technologies; there is a fear of moving into IP. So a key thing for me at this show this year is to really find out where we are with IP interoperability.

“We have SMPTE 2110 coming in, but there are issues around how you actually control all of that and make it work. Is it workable, and cost-effective, and resilient enough for OB vans or fly-packs?

“There’s a lot of nervousness around: do we have the right skills in the field to be able to do it? Interoperability at a control level: the manufacturers have to work together to bring in a system that will have that control layer. We have got to look at systems that make things easy in the field and bring all that back to our customers: that’s the key thing for this IBC.”

Kevin Fitzgerald: “We’re looking at developing our offering in the United States and the two vehicles – Columbus and Skye – are just the beginning of it. There’s a real need for this technology in that market, because it has a hell of a lot more connectivity there.”

Martin Paskin: “In some areas, you can look at uncompressed [operation] all the way through if you have the bandwidth; we’ve seen this with some of the tests we’ve done with UEFA and BT Sport. In other areas you’ve got less bandwidth – but there are still ways of sending signals across IP, having your routers and multiviewers at the far end, and maybe lower latency on audio. The technology is now there to do all those things. We’ve done a number of proof-of-concepts with IP, so we’re on the verge of doing quite a lot in that space.”

Kevin Fitzgerald: “UEFA EURO 2020 is going to be a multi-city, multi-country celebration of football. Will it all work [to operate a remote, IP-based system]? The answer is Yes, it will work. It’s just going to be about connectivity; have we got dark fibre, have we got switched IP networks? We in the TV and broadcast industry can deliver; can those service providers deliver at a reasonable cost?”

Martin Paskin: “Delivering content from one place to another over IP has been around for quite a long time. There’s actually nothing new there. It’s bringing that technology in to make it work for production, with uncompressed signals and low latency and bringing everything up: then we’re talking about massive amounts of bandwidth, as opposed to distribution. They’re two different things.

“We know what it’s like to use IP — we’ve been doing that for a long time. But with live sports you can’t turn around and do it again. If you’ve missed that goal, you’ve missed it.

“But it is happening now. Manufacturers like SAM have some really good technology there now. And as you know we’ve been working with companies like Aperi as well and will continue to do so, around development of routing and distribution.”

What about issues to do with UHD? There seems to be a lot of interest in HDR – from just about everybody, really – but no so much in 4K UHD…

Martin Paskin: “Having just been to the IABM meeting today, it seems the broadcasters would rather go HD with HDR because it doesn’t cost as much. And in reality, if you were to put an HD HDR picture up against a non-HDR 4K picture, chances are the average viewer would think the HDR picture is better – and it doesn’t cost anywhere near as much to get there.

“So there is certainly an argument going on in the industry now about 4K. Sports is slightly different. The broadcaster does want to fill those pixels up on screen. We have to remember that. Sports is driving that, more than any other area in broadcasting. In sports, 4K is still important: they may not be doing 4K production at the moment, but they know they will have to in the future.

“Then the other issue there, particularly for more distant and remote countries for examples is, do you go down the IP route or do you look at 12 Gig SDI? There’s a lot of 12 Gig SDI around as well.

“It’s all about support and resilience. There’s no point in putting a massive IP system into a second-world country, as they’re not going to have the skills to manage it. But there is kit available to take that into the traditional 12G SDI world.”

Kevin Fitzgerald: “Visitors to our stand here at IBC are able to get greater insight into the new services we are offering, and understand more about the advantages that outsourcing both production and facilities solutions to a single partner can bring in terms of operational and cost efficiencies. We’re presenting our unique approach to systems integration, which because of our global footprint, size and understanding of emerging technologies, enables us to bring greater flexibility to projects.”