At the show the company also introduced xG GamePlan, an impressions-based inventory optimiser that leverages the scale and distributed nature of virtualised environments to help media companies increase the value of available inventory. The xG GamePlan module provides broadcasters and distributors with a cloud-native inventory optimisation engine fine-tuned to increase revenue opportunities by meeting audience targets and satisfying buy-side campaign requirements, while consuming the minimal amount of commercial airtime.

Imagine Communications and BT Media & Broadcast collaborated on an Ultra HD contribution demonstration at IBC. The two parties came together to show how visually lossless, low-overhead TICO compression can be used to increase the efficiency of contribution (backhaul) circuits for demanding live UHD content – especially relevant for the sports production community.

Another collaboration Imagine Communications announced at IBC was with Sky Italia, applying the former’s recently announced Open Zenium programme to enrich the European operator’s compression operations with the addition of artificial intelligence capabilities. The customisations, made possible through Open Zenium, are expected to enable Sky Italia to automatically optimise the quality of content and reduce costs through the insertion of machine learning directly into the data flow, bringing new functionality to an existing product. 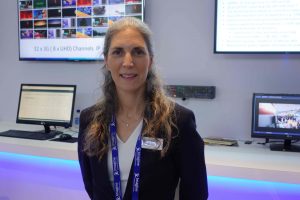 At the show SVG Europe sat down with Dr Glodina Connan-Lostanlen, Chief Marketing Officer at Imagine Communications to discuss both uncompressed and compressed production over IP, the continuing importance of industry interoperability, where the company views the arc of Ultra HD adoption by broadcasters, and the role of its new xG GamePlan in helping to bridge the gap between traditional linear schedule ad inventory and the rapidly rising but hard-to-monetise world of OTT video consumption.

“Again this year we’re showing full interoperability with uncompressed over IP SMPTE-2110 – for which all the key pieces have now been approved,” said Connan-Lostanlen. “Things have accelerated regarding the adoption [of 2110] – and it seems to me this has gone faster because of the whole interoperability effort.

“For us it’s still very important to push that message of interoperability. We want to help convince the customers that it’s real, including – in particular – for the live environment. There is still a lot of scepticism around. The good news is it’s not ‘a zero or a one’: you can have islands of SDI and start to really integrate the core as IP,” she said.

“A good example is the new TPC Switzerland truck. There is no baseband router; there’s a big Arista 100 Gig switch. But this connects to islands that are still in the SDI world, such as the switcher.

“What we have provided to TPC to make it an uncompressed-over-IP truck is the Selenio Network Processor gateway product that we announced at NAB and have launched here at IBC. It’s a programmable IP-to-IP, SDI-to-IP or ‘whatever you want’ in and out processor” for that environment. You can have standard off-the-shelf switches from Arista, Cisco and others and you can link that world into the remaining islands of SDI.

“The end result is you save space on the truck, if you don’t have a big baseband router there. You have IP multiviewers and all of that is much more clean, silent, compact and space-saving,” she said.

“As much as mobile production is tied to sports, some customers use mobile production as a test environment to see if IP will work in their green-field studios as well. That’s the case with TPC; they’re using the truck to learn about the move to IP. We’ve reached a good milestone where people are no longer saying ‘oh it’s not ready yet’: they’re saying ‘we’re going to do it’. They’ve made that step. But they still want to test; they want to try it. To help everyone, we’re going to share as many real-life examples as we can.

“Regarding UHD,” continued Connan-Lostanlen, “I think it’s really picking up now. Even though UHD in terms of delivery at the other end is probably not there, nobody is asking questions any more at the production end. That’s really the main driver for IP, as people realise the only way they can afford UHD capacity is if they turn to IP. In coax it becomes too big.

“Our collaboration here at IBC with BT is very important,” she said. “This is on the UHD contribution side – not in the SMPTE 2110 world as this is a compressed [platform]. We’re adding more capacity to contribution links with low latency. Our hope is that once the work is done on the uncompressed side with AIMS, the next big topic is the compressed world. This is based on the TICO compression scheme – and I think we’ll need to spend almost as much effort there.”

“Sports is primarily about live production: but as I mentioned at your Sport Production Summit [the day before IBC], the distribution piece also becomes so important – especially the OTT piece,” she said. “If you look at the eSports market; it’s almost as if you’re connecting production directly to distribution. There’s no more playout in the middle. There’s no more ‘oh let’s create that programming’.

“What’s exciting is we have all the components and we can see the interaction of the live production piece directly with distribution. And the other piece on top of this is monetisation – dynamic ad insertion – and this is all coming together.

“It’s another macro topic that’s important; making sure the industry can maximise revenue without adding more,” said Connan-Lostanlen. “Optimisation of ad inventory is pretty important, especially as our customers sometimes need to invest in digital platforms without knowing how to monetise [them]. So they need to make sure that they can optimise their traditional revenue sources and use that to fund the unknown, if you will.

“We need to start to bring the advertisers into the conversation a bit more,” she said. “We need to figure out, and they need to figure out, how to value those digital ads a bit differently, a bit better. Right now they don’t, and that’s why at the moment most digital platforms are not profitable. And they’re still spending more money in the traditional world, which as we know is becoming fragmented. It’s a bit illogical, what’s going on right now,” she said.

“From a sports perspective it’s about how you bring together the broadcast you would undertake in a traditional way with making it available on digital platforms. How are you going to combine and optimise your inventory so that you’re making the most of both platforms?