With WebRTC-based live streaming, video can be streamed from anywhere to anywhere in the world, with less than one second of latency using open and scalable technology that’s supported on standard web browsers without the use of special plug-ins. By integrating WebRTC streaming support into the Limelight Orchestrate Platform, content distributors are able to implement scalable live video streaming workflows such as sports broadcasting, gambling, gaming and live auctions that require low latency.

Limelight also introduced the ability to simultaneously stream live video while recording it for subsequent use as Video on Demand (VOD) content. The live video streams are automatically captured and converted to popular VOD formats during later playback.

Michael Milligan: “We’re getting some great interest in this [WebRTC-based streaming], especially 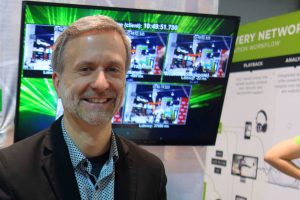 around sports. One thing about sports is the delay between the broadcast – whatever that might be – and online. That’s an application, as is online gaming. In online gambling you want to make sure that no player has an upper hand on somebody when you’re dealing cards: we’ve had a lot of interest from some of our online customers.

“We’ll be rolling this out across our entire network for our customers. We’re able to do sub-second streaming from anywhere to anywhere across the globe. It’s a new capability. Very low latency live streaming is something that’s becoming incredibly important to many of our customers in their workflows.

“We’re one of the largest CDNs,” said Milligan. “We have our own network and our own private backbone, and right now we’re up to 32 terabits per second of global egress. It seems like every week it grows a little bit as we continue to expand; we have 80 locations around the world where we deliver traffic, with close to 1,000 ISP and end-user networks. We have to really optimise that last mile so need to be connected to as many last mile networks as we can.

“We own our own network,” he said. “We’ve got a lot of delivery locations and capacity. We have a private backbone that ties it all together, so when the normal internet gets bogged down with traffic we can move traffic between our POPs very quickly and easily.

“We can guarantee the performance and where we have to serve from. We write our own software, so we can optimise for video re-buffer rates to give you the best performance over whatever type of network connection you have.

“And we have a free 365 global service with human beings! If you call us we’ll have a human help you, with local language support. The amount of traffic that we deliver is continuing to go up, but the number of trouble tickets from customers is going down – they’re having fewer issues,” continued Milligan.

“We expanded into 11 new regions around the world last year, and we did significant upgrades to 20 of our POPs as well. We continue to refresh our infrastructure, with the newest, fastest servers out there. We’ve increased our egress capacity by 39% in the last year – and actually we did a lot of that through software, optimising bandwidth on our servers. [This way] we get better performance at a lower cost, as we don’t have to throw more hardware to make it bigger.

“For some live events,” said Milligan, “latency [through standard HLS or MPEG-DASH] is not an issue. For others, especially sports, it’s a huge issue. You can reduce the latency by taking the size of video chunks you have to buffer down as small as you can – down to about 4 seconds for standard streaming formats. But to get below that, you really need to come out with something new – which is why we’re using Web-RTC,” he said.

“This is a technology that was originally developed by Google for things like video conferencing in browsers, so it meant more in peer-to-peer applications to do extremely low latency sharing of content. But the nice thing is that it’s supported by all the major browsers, so no matter what type of device you’re using it’s supported natively.

“Some of our competitors are trying to do low latency but it would require a special plug-in or you have to write new code to the way they stream the content. We can now stream anywhere with less than a second latency, and we’re deploying it at scale with hundreds of thousands of users all watching at the same time,” said Milligan.