IBC 2018 Reflections: Ross Video’s David Ross on the Need to Provide Customers With All Options

Ross Video hit IBC with hot new products like the Carbonite Ultra production switcher, XPression graphics, and more. It also continues to make sure there are a number of different pathways available to its customers when it comes to deciding whether or not they want to embrace IP today. David Ross, CEO, and Stuart Russell, EMEA, marketing manager, sat down with SVG to discuss the latest industry trends and the Ross Video customer philosophy. 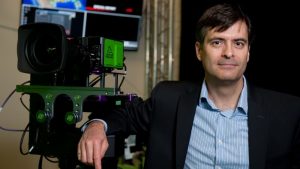 It’s only been a few months since NAB, but have you seen any shifts at all from customers in terms of what they are looking for or trends?
Ross:
One of the things we have noticed, especially within the industry in general, is a shift in position on IP vs. SDI. It’s interesting because as IP has been growing, and we are a big part of IP as well and we have a lot of IP-based products, my view has been a balanced one. First, our industry is slow to move, and it has a lot of legacy equipment. So, there are customers that are going to need future SDI products, not just moving completely to IP. But that has not been the message from the broadcast industry as a whole. Two years ago, there was a denial of 12 Gbps SDI. But what we are seeing now is 12 Gbps SDI showing up in all of the products from the companies that said that the future was exclusively IP. We are starting to see a more balanced view.

Increasingly you hear people acknowledging that IP is not the answer for every production.
Ross:
No, it isn’t. There are flypacks, small studios, islands of SDI. The majority of the business is still 12 Gbps, and when we look at our sales, 12 Gbps is still a big thing in the industry and people are buying it. And they are less embarrassed to do so than they were two years ago.

Russell: They don’t want to innovate themselves out of business and the success of 12 Gbps vindicates a position around SDI.

Ross: I have been told that I am anti-IP and also a luddite. But I also come at it from a business and historical perspective. Only half of the broadcasters today are HD and, yes, there are a lot of bleeding-edge people and things like 4K and HDR, but there are also a surprising number of people who are still in SD. It’s more than you would think. Plus, remember that with 4, 5, 7, or even 10-year depreciation cycles, it is going to take longer than two or three years to completely revolutionize the industry. It’s not that I long for the days of SDI, I just want to sell things that customers want to buy. And when you look at the growth of Ross Video, that sort of decision making has not led to a decline of our business.

Stuart: We like the idea of having pathways for our customers to go to where they want.

One thing that also seems to be popping up more is that the move to IP is not about saving money, at least not yet.
Ross: We just launched a new production switcher with 12 Gbps SDI. It’s a 1RU box that has 24 inputs and 14 outputs in HD as well as a software version that is 18 inputs and 10 outputs with a 1.5ME with format converters. It costs $10,000 and with 18 inputs times 12 Gbps can move 2 Tbps. How many 25 Gbps ports is that, and what is the cost per port? You couldn’t buy the SFP port for the price of the entire product. So, there is a place for designing things in 12 Gbps SDI as it is far cheaper than people think it is. And what is interesting is part of the conversation about IP was how it was cheaper than SDI. And then you would ask ‘for everything?’ And they would say, ‘Well, maybe not everything but maybe in some situations.’ And then it would turn out they paid a 20% premium but after a 70% discount. A lot people are spending more for IP but hopefully it will move out of the hype phase and into the business reasons rather than the ego projects. Our industry is not famous for being flush with cash and ego projects are inconsistent with the industry.

The depreciation cycles are also an issue, especially as it relates to IP gear.
Ross: Now you are talking economics and the basics of financial accounting. Are you designing a facility because you want to be the first with IP or is it so that content creators can do something? If you spend twice as much going IP as you do SDI, then next year you are depreciating twice as much, and it goes from being cap ex to op ex. And the moment it goes to op ex then that amount of dollars, which is millions over the course of five years, suddenly becomes headcount. So, if you are overdesigning than you are laying off the people you designed it for the next year.

What about the issue of cap ex vs. op ex? More people seem to be becoming interested in moving to op ex.
Ross: One of the things about going from cap ex to op ex as a manufacturer is what is the transition point where we would make money going to op ex? It is usually within three-to-five years, but at that point the customer is then paying more for the product than if they had just done cap ex. At first, the capital budget is so much lower, but then two years later the CFO says the op ex is out of control.

Increasingly, there is a need for interoperability, but chatting with others I have heard that interoperability between vendors is not where it needs to be. Do you think interoperability is at a good place?
Ross: No, not at all. If you looked at the Devoncroft Summit prior to IBC, a couple of customers were on the stage. One of them said they were first to get into a certain type of audio standard and there is only one company that supports it. That to me is an interesting problem. And then another customer said they built an OB van using the 2022-6 standard and now it is obsolete. And that is interesting because the whole point was to be futureproof. But hopefully interoperability will stabilize with SMPTE ST-2110 and 25 Gbps. And 2110 is a good thing as an interconnect, but it is not discoverable, so now people are spending a lot of time hitting the period key for the IP addresses. The plug-and-play concept, discovery, and interoperability using NMOS and all the other things we have been talking about is still not there. I hope that the industry continues the momentum to discovery, interoperability, and diagnostic abilities so we can have a standard where anyone can plug and play, and equipment will work together. And I have hope because customers are getting pretty vocal now that they are living with this.

One of the things you can’t help but notice as you walk around the show floor is how the industry seems to be moving in different directions. Is there any way to coalesce the industry and get everyone marching in the same direction?
Ross: The industry is not in the process of undergoing a consolidation of vision, but it is fragmenting instead, and I think it will continue to fragment. You’re going to see people do 720p, 1080i, 4K, HDR, and wide color gamut. And then there are three major contenders for HDR, so you hope to see something get sorted out there but then you have not only 12 Gbps, but 3 and 1 Gbps, and it will be that way for a very long time. And then there is a low end with NDI and compression and then the evolution of 2110 and multiple control systems that are evolving, flourishing, competing, and creating walls between each other. And then you have online video, OTT, satellite still around, and then Netflix looking to do more live production. It’s interesting times and it’s going to be exciting to see what happens. But the concept of us all getting on one platform and doing one thing isn’t going to happen. You could argue that, as a manufacturer, that chaos can be a good thing, especially if you make widgets that interconnect things. But also, as a manufacturer that serves the broadcast industry, I would like to see us do things that maintains the health of our customers and not just continue to try and extract money from customers who have less and less money. And I also have a huge desire for our broadcasters to innovate, engage millennials, and stay relevant with what they are doing. A broadcaster’s job should not be playing re-runs because we can get those online anytime we want. They should be creators of content and exporters of culture.