The company also recently announced that DaVinci Resolve 14, the editing, colour correction and digital audio software, is now available for download from the Blackmagic Design website following completion of the beta program. New features include up to 10 times performance improvement, a new audio post production suite with Fairlight audio built in, and multi user collaboration tools that let multiple people edit, colour and mix audio from multiple systems, all in the same project at the same time. 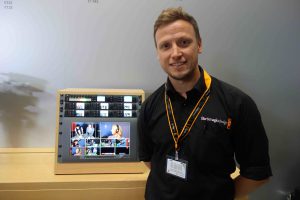 At the show SVG Europe sat down with Blackmagic Design EMEA Director Stuart Ashton to discuss the shifting nature of the content creation marketplace and the central role the company feels it plays in facilitating high-end production and delivery to new platforms at realistic price points.

“In terms of output of what is being created, the volume of places in which to distribute your content is much wider than what it was ten years ago. There is a lot more content being created,” said Ashton.

“Here’s an example: there’s a world championship boxing match happening in Manchester next week where Hughie Furey is fighting Joseph Parker. For the first time, that is pay-per-view on YouTube. This is a world championship boxing fight that’s going to be delivered by an internet-based content provider and not a traditional broadcaster. Now this is a first, a landmark. I believe the promoter sold the rights to YouTube.

“We have to be very conscious of the fact that the broadcasting of live events and sports is not now just associated with terrestrial and cable TV,” said Ashton. “The internet providers, at the moment, are the guys who are really interested in developing their business into a broader broadcast marketplace: look at Netflix and Amazon. They’re the ones who are taking risks, to try and generate a higher volume of content.

“But in addition to that, the expectation of viewers is that they want to see it in 4K and also HDR if possible. These platforms have the bandwidth and so have the ability to deliver that content with the production values people expect,” said Ashton.

“So when you consider that the expectation is still there, what has changed is the cost and the budget and the value that’s associated with the financial contribution towards getting that to work. These people are stretching the bounds of creativity, at times way beyond what traditional broadcasters may see as feasible. These are the guys who are willing to take the risks, trying to do things with equipment that is not necessarily the equipment approach of previous days.

“In January we announced the ATEM Television Studio HD, along with the Blackmagic Web Presenter (a box that allows you to stream onto YouTube) and the Hyperdeck Studio Mini (an alternative to a typical VTR but using SD cards). These are three devices that, combined in value, are less than $2,000 to purchase.

“The volumes we have sold are way beyond anything we have sold in that field before. Beyond anything we could have imagined. By the time we got to NAB it was already our fastest-selling ATEM product ever. That’s because it’s a product that’s not only suitable for traditional live production but it fits and dovetails perfectly into that online broadcaster model.

“We’re selling those at every level. This is an HD product that delivers 1080p60. High frame rate, high definition, with SDI and HDMI connectivity: it is good enough for the vast majority of people who are streaming,” he said.

“That’s because the type of person using it is happy with high quality HD and professional connectivity: they are not typically multi-camera and they don’t typically take over a studio for a few days. But they are producing high quality creative content day after day after day, and what they need is to get in and out, with speed and quality and a great price. That’s right where we’re seeing the majority of interest right now. Quick turnaround, speed and quality.

“If you look at say cycling or freestyle skiing as sports examples, these are people who need to do a few hours work and unplug everything and take it to the next venue. They don’t want to set up multiple stations with the same equipment over and over again. This is a recurring theme we’re seeing,” said Ashton.

Is a show like IBC appropriate to meet and greet those ‘new’ guys? As well as the ‘traditional’ broadcast customers you would expect to see?

“What we find is that as we approach IBC, people are thinking about projects that they’ve got lined up six to twelve months down the line. We’re about to come into a very significant period because we’ve got the World Cup in 2018, and already there is commitment from high-end broadcasters to deliver HDR-based football content, and attempts to deliver 8K content. Already the broadcasters are looking at what they can deliver around that three week window of football.

“But what you’ve also got is all the stuff that goes into the lead-up to these big events, and the stuff that goes on around the event. That’s where you’re looking at the smaller, mobile solutions to go into a Fan Zone or a team camp. 2018 is a good example of where a tournament will create a whole multi-tiered ecosystem of requirements and creative output. I anticipate that there will be a phenomenal production of online material alongside what is happening in traditional broadcast coverage,” said Ashton.

“We’re heavily promoting the ATEM range here at IBC. The interconnect of that with the Web Presenter and Hyperdeck plus our routers, converters and cameras is of significant interest to those people.

“In addition we’re announcing Ultimatte 12, the first 4K 12Gig SDI product from Ultimatte with entirely new algorithms and colour science and enhanced colour fidelity. We’ve also got in there the ability to do a much faster chromakey than maybe was available before.

“The starting point for us is always to get people further down the line without having to waste time. In typical Blackmagic mode we’ve taken a product and looked at it in terms of what is achieveable with the technology and we’ve thought ‘if we can make it for X and sell it for Y and provide a significant discount with value’ then we’ll pass that on,” said Ashton.

“The new Ultimatte, in concert with the ATEM products, now provides a broadcast-quality chromakey and broadcast-quality switching in high formats with high resolutions at a price that is available to most,” he said.