As announced by its chairman Jeff Foulser to SVG Europe’s SportTech 2019 audience at Lord’s on Wednesday, independent TV sports production and media company Sunset+Vine has been awarded a new four-year host production deal by the ICC.

The deal covers all live event production services for ICC TV until 2023, excluding the India events in 2021 and 2023. In addition, Sunset+Vine will also produce daily highlights packages for all events. The contract was awarded under competitive tender.

Huw Bevan, Sunset+Vine’s head of cricket will be the executive producer supported by Gavin Scovell as lead director and Joanna Lowndes Lumb as head of production. 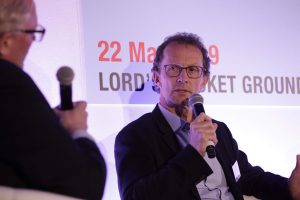 Jeff Foulser, chairman of Sunset+Vine, commented: “over the last four years the ICC and Sunset+Vine have been together on a journey to set the bar in cricket broadcasting and to deliver a truly world-class product for broadcasters and cricket fans. ICC TV was successfully established – a ground-breaking model for how a governing body and production company can collaborate.

“The partnership has allowed us to be more ambitious, more adventurous and more creative. This approach will see new viewers converted to this magnificent sport through engaging and dynamic coverage. We are truly excited by the opportunity.”

Aarti Dabas, head of media rights, broadcast and digital at the ICC, said:

“When we decided to take ICC’s live production in-house for the first time, four years ago, we partnered with Sunset+Vine to help ensure that we could maintain world class production values and continue to deliver innovative and engaging content to our broadcasters, media rights partners and fans around the world. The increased engagement with the Live coverage and other content are a testament to our partnership.

“The next four year cycle of ICC events provides a challenge to us all to continue innovate the way we present cricket to a growing global audience, giving cricket’s one billion plus fans an engaging and entertaining product. Sunset+Vine have shown that they are up to the task and we look forward to continuing to work with the team.”

Sunset+Vine has won 26 major broadcast awards for its cricket coverage including five BAFTAs as well as introducing innovations such as the Red Zone, Snickometer, the Analyst, Hawk-Eye and the ultra slomo camera – award winners in their own right.

Sunset+Vine will be producing the ICC Men’s Cricket World Cup 2019 which takes place in England and Wales between the 30 May and 14 July 2019. This is the last major live event covered in the previous ICC Live Events Production contact 2016-2019, which Sunset+Vine was awarded in 2015.