The English Football League has moved from just being a rights holder to becoming its own live streaming operator over the last two seasons with the launch of iFollow, its global OTT streaming service that brings even the smallest of its 72 clubs to its fans, wherever they are.

Although that service is currently limited to fans outside the UK and Ireland, the EFL’s new deal with Sky Sports means that domestic fans will also be able to access iFollow from next season.

The iFollow service is being delivered by NeuLion, which also works with broadcasters and other sports bodies, such as the NFL, NBA and UFC. It is managing the end-to-end video workflow, through a video CMS, outputting to its own player technology and applications, as well as certain third parties on the web, and wrapping that in all the relevant security protocols.

While it has one client in EFL, it also provides 65 individual club services (including some from the Premier League, as they didn’t want to change their digital provider when they went up – even if they can’t stream their club games while they are in the Premier League, which the EFL doesn’t look after).

For EFL, and other clients, it provides a virtual announcer “cloud-based commentary service where you can have people based remotely watching that live video as it comes through, overlaying the commentary, and then it’s stitched back together and delivered to the consumers, with a 30 to 60 second delay, depending on geography,” explained Peter Bellamy, Senior Vice President, NeuLion. It is useful for the smaller clubs or for sports federations wanting to localise for international markets in a cost-effective way. 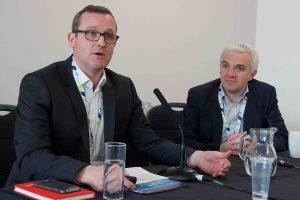 The EFL has three divisions, with 24 clubs in each, playing 1,656 league games every season, with matches almost every day, “which is a blessing from a commercial perspective, but sometimes a curse from an operational one,” Drew Barrand, Marketing Director, EFL told a recent session at Streaming Forum 2018 in London.

An OTT platform for growth

Before it started live streaming, the EFL was doing well with attendances and selling TV rights on the domestic market – with a 30-35% year-on-year increase in revenue from that, and 18 million people through the turnstiles, but it wanted to attract more international viewers, particularly English people living abroad. It already sells a package of up to 150 games to Sky Sports, which does the multi-camera production, then re-sells that to international broadcasters in about 215 countries. That leaves about 1,500 other matches, which it can’t sell domestically because it has to protect attendances.

The international broadcasters taking its matches didn’t need any more than 150 games, so after “a few rounds of negotiation” it did a deal to allow it transmit the remaining games OTT – as it also achieved an 85% increase in its income from international broadcasters, the OTT games didn’t affect its revenue. The additional matches are streamed through individual club websites and apps, using NeuLion, which was chosen after an exhaustive tendering process.

Now fans living outside the UK and Ireland can watch all of their club’s matches live, using the iFollow app (launched this season). “We’ve managed to create an opportunity that opens up a whole new revenue stream for clubs” outside of broadcast and sponsorship income, said Barrand.

“From a technical and innovation perspective, we are one of the first sports rights holders who have actually stopped talking about it and done it,” but there have been challenges in becoming its own OTT broadcaster, including managing subscribers and dealing day-to-day with the fans, and all the clubs (who, if there are any problems, just want them to be fixed, and as quickly as possible).

However, after just the first six months of iFollow, revenue is in the realm of multi-million pounds “and it’s definitely lived up to all we wanted it to do and has laid a massive platform for future growth,” he added.

While there are challenges in extracting yourselves from existing rights deals, with broadcasters nervous of facing competitive services to what they offer, “it’s the way the market is going and everyone needs to look at it,” said Barrand.

“Every one of the clubs has to be treated equally,” whether they are big clubs like Leeds United or Nottingham Forest, or minnows like Fleetwood Town or Morecambe*. “They all need to be given the same commercial opportunity. […] That’s where the benefit of offering a collective platform works, because from a cost perspective you can manage it across the 72, but then the value becomes how each individual club pushes it, markets it, how big their fan bases are.”

As a league, EFL is responsible for recording the 1,656 matches, but anything outside that is down to the clubs, and NeuLion has even had to deal with pre-season friendlies or age-group matches shot on phones. “So, you have to be flexible, and while we can adopt pretty significant infrastructure to broadcast the main games,” the clubs may shoot on obscure formats and expect everything to work, explained Barrand. Indeed, for the smallest clubs, where there are no dedicated digital staff, everything has to be as simple as possible – from their perspective, even if it causes NeuLion problems. It also means that all of the services are essentially separate products (even if they are all tied together at the back end), so the web sites and apps can’t look like the club’s rivals.

EFL also runs two knock-out competitions, each with its own rights rules (one involves Premier League clubs), so it has to have a flexible model that can also meet all those requirements.

Fans want to watch live matches, even if they have to get up at 3am in Australia, and because they are so dedicated, and may not be near any fellow fans, they are also more likely to engage with the platform. “Fan reaction has been great,” said Barrand. “They are crying out for more.”

It’s not just the fans who want more; the clubs want more money. “They don’t spend long going ‘well done’, they go ‘what’s next’,” he said. EFL has just struck a new five-year broadcast deal with Sky Sports for £130m per year, within which it will have the ability to stream games domestically from next season, so fans in the UK and Ireland will be able to watch certain matches, while still wanting to protect attendances at the grounds – which is why it has picked midweek night games, as those are the most difficult for any but the most dedicated fans to get to anyway.

It needs to protect Saturday afternoon kick-offs, as they are the big earner, and while it could charge the same to get the game streamed, it would result in a worse product as the stands would be empty and there’d be no atmosphere.

It will stream more than a quarter of Championship matches and a third of League 1 and League 2 games next season. “That’s a massive step and a hell of a thing to achieve from rights negotiations. It is the first and only deal Sky has done where it shared its rights,” said Barrand.