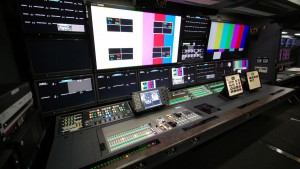 Inside the newly completed 8K OB vehicle now in use by NHK.

Ikegami has announced the completion of what is billed as the world’s first 8K OB production vehicle. The new vehicle has been delivered to NHK and is designed to operate as a complete mobile 8K broadcast production facility, complete with 22.2 channel surround sound.

In Japan, the roadmap for 8K broadcasting announced by the Ministry of Internal Affairs and Communications specifies that trial broadcast transmissions will be conducted in 2016. Regular 8K broadcast services are planned to begin in 2018.

Many elements of 8K television production infrastructure are much larger in size, power consumption, and number of cables than their HDTV equivalent. This is because 8K broadcast production captures 16 times more image information than HDTV. Organising an 8K OB vehicle is therefore much more challenging than designing and producing traditional OB vehicles.

The 8K OB vehicle produced by Ikegami delivers extremely high quality and high reliability in a compact size. The vehicle’s specifications allow operation not only in Japan but worldwide so it can be operated for global sporting events such as the Olympic Games. It can be expanded to accommodate additional equipment as and when required.

The 8K OB vehicle was delivered to NHK in September 2015. Its role will be to allow television audiences to experience the full reality of live events from wherever they choose to view.

Here is an outline of the primary features:

Additional video monitors: 32-inch and others.