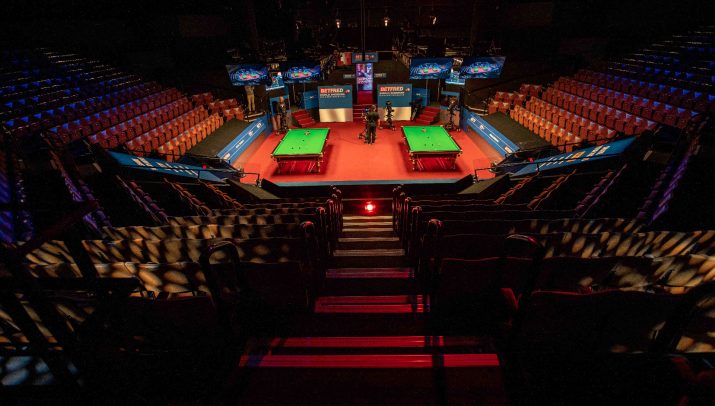 Detached from its time-honoured April to May place in the international sporting calendar by the coronavirus crisis, the World Snooker Championship 2020 has resurfaced on our screens thanks to the combined efforts of World Snooker, UK government and local authorities and host broadcast provider IMG Productions Scotland, along with broadcast partners BBC Sport and Eurosport.

IMG provides the presentation output for the BBC as well as the world feed match coverage, whilst Eurosport manages its own network presentation.

The World Championship from The Crucible in Sheffield is currently on BBC TV, iPlayer, Red Button, the BBC Sport website and the BBC Sport app. Over the 17 days of the tournament the marathon coverage appears across its various platforms 24/7 with live match play from mid morning until late at night.

Eurosport is screening every round of the Championship, including qualifying, on its main channels across more than 50 markets in Europe from 21 July to 16 August alongside the Eurosport app and on-demand highlights from every match.

Last year, Judd Trump beat John Higgins by 18 frames to 9 at the Crucible to claim his maiden World Championship title, becoming one of just 11 players to complete snooker’s Triple Crown. This year the semi-finals commence on Wednesday 12 August with the final concluding on Sunday 16 August. This year’s winner will receive £500,000, with the total prize fund being more than £2 million. 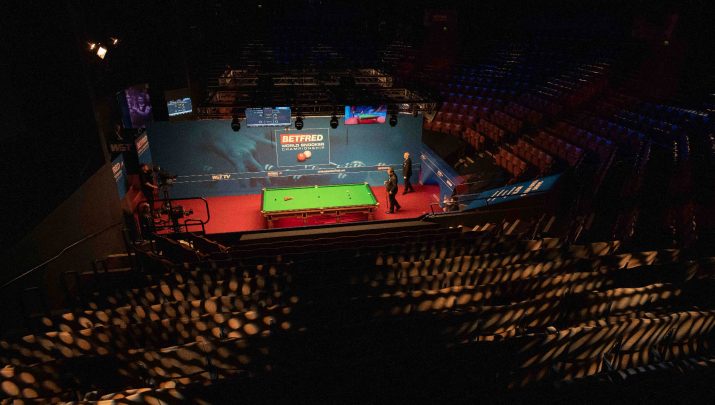 The Championship was one of the first sporting events chosen to allow for the return of spectators since lockdown restrictions were lifted in England. As a result a maximum of 250 spectators were permitted when the main Championship started on the morning of Friday 31 July with defending champion Judd Trump breaking off against Tom Ford. The normal capacity at The Crucible is 980.

Around 200 spectators were inside the arena on Day One when Prime Minister Boris Johnson made an announcement that due to a new tightening of COVID-19 measures in some parts of northern England and a rise in the number of confirmed positive cases, crowds would no longer be permitted at any sporting events for at least the next fortnight. Consequently from Day Two no crowds would be permitted.

This required World Snooker and host broadcaster IMG Productions Scotland to pivot once more, having spent months of planning alongside authorities and technical partners to prepare for a World Championship tournament where the principal guiding objective was to have as few people as possible on location in Sheffield.

IMG Productions Scotland executive producer, Alison Witkover, told SVG Europe: “We found out in May that the Championship was hopefully going to happen at the end of July and from that point, we started investigating possibilities for remote production. WST, the governing body, were keen to have an absolute minimum number of people on-site in order to get the go-ahead to safely run the event.

“So we had a lot of conversations and initially started thinking whether we could do everything remotely from our studios in Stockley Park [beside Heathrow Airport] including the match coverage. However, because of the timescales and costs involved to bring back all the individual camera feeds, we opted to keep the match coverage up in Sheffield and produce the studio presentation at Stockley Park.

“The match camera operators needed to be on location anyway, and the production team required to provide the world feed is actually relatively small, so we felt this was the best solution. It took a lot of preparatory work by a number of people including our OB provider NEP, IMG Studios and the BBC.

“Since then it’s been evolving really,” said Witkover. “We’ve produced the snooker from Sheffield for over 20 years, so we had to unpick it and work out how we could still offer high-quality output in a very different way. To put the change in context: last year we had 145 people onsite and this year it’s 59 (on shift patterns to cover the length of day).

“We have a reporter in Sheffield, along with an ENG camera team producing feature content, so secured some additional connectivity to bring these feeds back to IMG.”

Most commentary is being done from IMG Studios in London, but there is one commentary box onsite. This was required as a number of the snooker commentary/analysis team are also competing as players in the World Championship and mix the two activities through each day while they remain active in the tournament.

“One of the most complicated things has been the audio. We have commentary in London and commentary in Sheffield and there are nearly 30 different audio feeds passing between the Crucible and IMG Studios. The telestrator was a challenge too, but we came up with a solution to control the hardware (based in Sheffield) from Stockley Park, allowing the commentators to control the telestrator output.

“And then we had to create a studio in London, as we are usually located in the public Winter Gardens in Sheffield. We have used elements of the BBC Sport OB set and added a snooker table in the studio so that our pundits can do demos and analysis. A plasma screen links the studio with the Crucible enabling us to talk to players and the reporter. 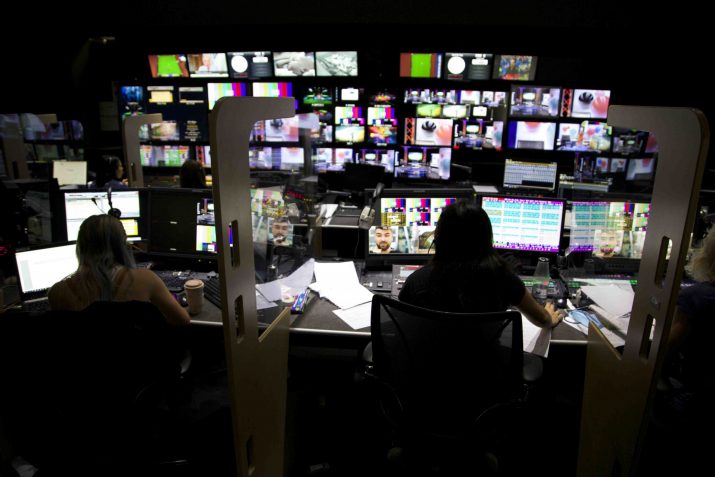 “We are very strict on social distancing here at IMG,” continued Witkover. “Every position is divided by a Perspex screen and a very strict wipe-out wipe-in system in place for everyone working here.

“We’ve had to build commentary boxes here that are big enough for social distancing, with Perspex screens in place as commentators need to be able to see each other. Likewise the team up in Sheffield have had to adhere to very strict – and ever-changing – guidelines from the governing body. Everyone working inside the building is being COVID-tested at least twice during the tournament. We need to make sure all our crew are kept safe,” she said.

The Crucible is a small theatre, but because this year there are no press seats or multiple TV commentary positions in the auditorium, more space has been created on the arena floor so that camera operators can stay a little bit further back from the players and referee around the tables.

“We’re still trying to include as much feature content as possible and we still want to have presence onsite, so we are presenting the morning sessions from Sheffield with a camera in the practice room. It’s important to still have people on the ground in Sheffield and the feature content has always been a big part of our coverage.

“There have been a lot – a lot – of conversations between all of the technical areas to make sure everything is covered: from the OB provider, to graphics, the studio, production and increased connectivity between the two sites. The detailed planning by all parties has made everything work so successfully,” said Witkover.

BBC Sport’s daily coverage of the World Championships is being presented from the purpose-built studio at IMG by Seema Jaswal and Jason Mohammad with a commentary/analysis team comprising Steve Davis, Ken Doherty, Stephen Hendry, John Parrott and Dennis Taylor.

In Sheffield Radzi Chinyanganya is presenting and reporting, alongside Alan McManus and Joe Perry. Rob Walker is also providing commentary and feature content alongside his MC duties for World Snooker.

For BBC Sport executive producer Phil Bigwood worked closely with World Snooker and IMG to pull together the remote production model for the rescheduled tournament. 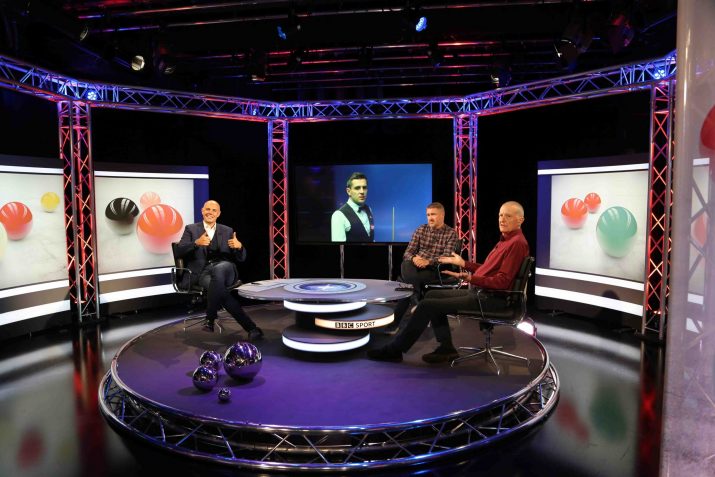 Bigwood told SVG Europe, “Yes it has been difficult to plan, because of all the uncertainty leading up to the event and the short timescale. I have to give all credit to World Snooker and IMG really: from a BBC point of view, with the loss of the Tokyo Olympics, the end of the Premier League football season and then the beginning of the new season in September, the snooker has slotted into the gap really well. It has proved to be a very astute piece of scheduling. To have top level live sport available to BBC audiences has been fantastic.

“The two-table operation at The Crucible has worked well with the match coverage onsite and the presentation studio at IMG. Given the current circumstances this was the right and responsible thing to do – the safety of everyone involved has to be the priority.

“This year we have increased the number of network hours we are televising and have secured additional peak time evening slots on BBC 2 and BBC 4. Despite the unusual timing of the event and with it taking place during the ‘holiday season’ we are very pleased to see that in audience terms the Championship is performing well,” said Bigwood. 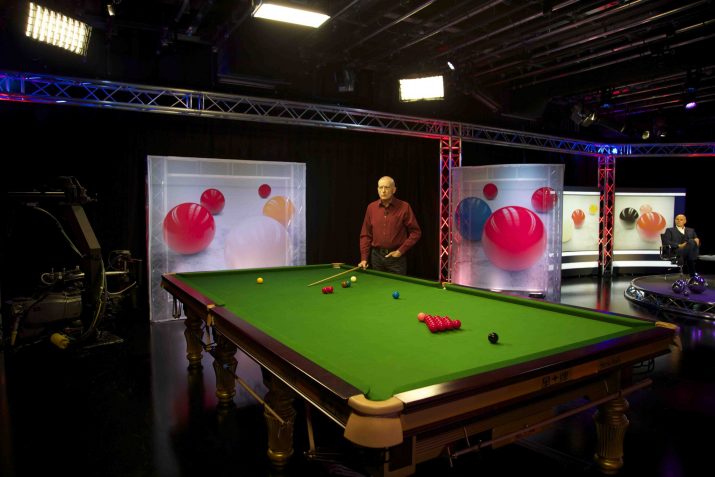 “There were a lot of discussions about the presence or absence of a crowd. After the government announcement on Day One that no audiences would be permitted at the Championship, World Snooker approached its broadcast partners and suggested some crowd noise at key moments during play. We were receptive to that idea. So as of Sunday 2 August there has been a ripple of applause introduced around winning frames, good shots, century breaks and so on.

“I think it has worked well overall: the key thing, as opposed to football, is that the crowd noise is introduced ‘live’ within the auditorium by World Snooker. It is not done by ourselves or Eurosport and therefore we do not have the possibility of offering viewers ‘with’ or ‘without’ crowd noise options. We decided we would trial it, and I think it just adds a little something.

“It’s not a constant background noise as is currently being used on football and cricket; it’s very sporadic and occasional and only appears in short bursts. It’s still something we’re refining, but overall it is felt that the advantages outweigh the disadvantages.

“The key thing is that the crowd noise is introduced ‘live’ within the auditorium by World Snooker” – Phil Bigwood, BBC Sport

“If the situation had been different we would have liked to add some more bells and whistles to the coverage – such as virtual graphics – but that was not possible,” continued Bigwood. “The key is that we have tried to get the basics right given all the challenges we faced in the lead up.

“We’re really happy from a BBC perspective. I would like to pay tribute again to World Snooker and IMG. It has been incredibly complicated, with a lot of moving parts until late in the day and even during the tournament itself.

“It has proved to be a really good collaboration between all the key stakeholders, from initially getting the tournament into the schedules, organising the technical and production plans and putting all the necessary COVID protocols in place. A real Herculean effort by everyone involved. The icing on the cake has been that, to date, we have been blessed with some fantastic, close, incident packed matches which bodes well for the rest of the tournament – long may that continue.”