Most people working in the broadcast industry are white, middle or upper class, university educated, and sometimes well connected through friends or family already in the sector. Times are changing, however, and one person who has dedicated himself to making that happen is Bob Clarke, founder and chief executive at the MAMA Youth Project. 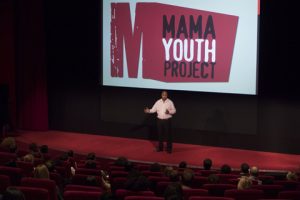 Bob Clarke speaking at one of MAMA Youth’s graduation ceremonies

Having gained charity status in 2007, MAMA Youth Project has spent the last 11 years training young people of all creeds and colours from under-represented backgrounds so that they can succeed in the media industry.

Young people with little or no experience in the industry are put through a 14 week-long intensive training programme at MAMA Youth, making Sky 1 commissioned programme What’s Up TV.

“There needs to be a change to the whole attitude of people within the broadcast industry. But the industry hasn’t changed. Black people are leaving the industry in droves.”

Part of that training includes paid work placements with Sky, the BBC, Endemol Shine Group, Procam TV, Pinewood Sound and MBS Lighting. Of the young people that get through the MAMA Youth, 82% are still working in TV 12 months later, and overall, 98% are working, with that 16% not in TV roles pursuing careers with real futures.

MAMA Youth began in 2005 when Clarke, 20 years into his broadcast career, was working as a freelance editor in a studio. Someone said to him in conversation that there were not enough black people in the broadcast industry.

He remembers, “the way he said it reminded me of the way someone said the same thing to me when I had just started out 20 years before”. He continues: “I went home feeling down. I thought, what could I do about it? I decided to throw a pebble into the water, to help people like myself get into the industry, and in that, to include the white working class as well as black.” 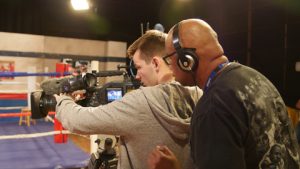 Bob Clarke working in the studio with MAMA Youth trainees

In his consideration on exactly how to start this plan, Clarke looked back on his early career and realised that he had learnt on the job rather than through formal training. “I’ve lived off of that [learning on the job] and done very well.”

The young people Clarke was looking at bringing into broadcast do not come from an easy, safe environment, yet they bring a unique quality to their work, according to Clarke; resourcefulness. “I thought about what people like me can bring to the industry. I was resourceful and could get the job done. I wanted to get people into these jobs who are enthusiastic about what they are doing and are resourceful; I’m talking about the ability to not get hurt and not to hurt anyone throughout the day, which means you have to be resourceful.”

MAMA Youth is also there for university educated working class young people, because they are also unlikely to have the connections they would need to get into the industry. He says: “Even though I dropped out of education at 15, I think it’s wrong that a lot of charities won’t help graduates because they could be the first graduate in the family.” 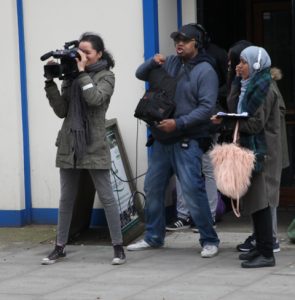 Taking filming to the streets with MAMA Youth Project

His experience in multiple studios over the decades had shown Clarke a side of the broadcast industry he is not impressed by: “So many people with three years’ experience in the industry still don’t understand the process of making a TV show. They’re in the edit suite through whatever reason, but their work ethic isn’t the greatest and they are getting paid good money to do a job. You wonder how and why a lot of people in the industry are moving up the ladder. There might be a son or daughter of a director who is working bloody hard, whether their dad is in charge or not, but a lot of people in the industry haven’t had to struggle, which can come out in the way that they work, by not putting 100% into the job or even learning about the job.”

To give people the experience they need, in 2005 Clarke decided his students should produce a TV show. Clarke recruited 15 young adults from black, Asian and minority ethnic (BAME) and white working class backgrounds to train and then produce a magazine TV show called What’s Up London. He funded this out of his own money, and 10,000 DVDs of the show were distributed for free. Altogether, 14 of those first graduates got work in the industry afterwards. Says Clarke: “I thought, we’re onto something here!” This led to the creation of the MAMA Youth Project.

The first years were tough for Clarke and his family, as he continued to fund the scheme himself. In 2013 and £350,000 later, Clarke had remortgaged his house twice to keep MAMA Youth going. He persevered through the first eight years of its existence because of the results he saw: “In 2007 for the first time I did employment figures, and 31% of the students had got jobs that year. So I carried on, and in 2009 the charity was recognised by The Council of Europe as a top ten organisation in Europe for demonstrating good initiative and practice for diversity in television (the only other two companies recognised from the UK in the same category were the BBC and Channel 4), and the Cultural Diversity Network (CDN) awarded me with the Special Recognition Award for promoting diversity, at the CDN Awards in November 2009.”

He goes on: “I thought at that stage, this must bring in some money now, but it didn’t. Apart from getting myself into debt, I worked nights as an editor from 2006 to 2013, surviving on about four hours sleep a night, and ran the charity during the day. The only reason I continued was because the stats on getting people into employment were rising and rising. I was doing what I set out to do and there was tangible evidence it worked; in 2013, 83% of the young people that went through the training were employed in the industry after.” 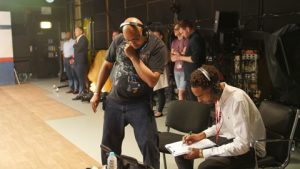 In 2010, Sophie Turner Laing was managing director of content at BSkyB, heading up its entire broadcasting operation outside of sport. Clarke had a meeting with her and she was the first to inject some money into MAMA Youth to support its training activities.

Turner Laing also paid for an awareness event at the BAFTAs to highlight what the charity was doing; Clarke ran the project’s latest TV show in the background and seeing the quality of the programme, Turner Laing asked for it to be a Sky Pick TV acquisition. In 2011 Sky formed a partnership with MAMA Youth Project to help increase diversity within the TV industry, becoming the charity’s first industry patron.

2013 was the turning point for both the charity and Clarke’s financial situation. The BBC came on board and funded the second training programme, and so finally, the charity could afford to pay not only Clarke but also other members of staff.

In 2015, with the What’s Up show doing well as a Sky acquisition, it became a Sky 1 commission. From that point, each of the two training courses followed the same format. Each takes on 24 young people, who are with MAMA Youth for 14 weeks. That consists of four weeks of intensive training on the job role they applied for, then 10 weeks of on the job training in that role while working on What’s Up TV and a work placement at partner companies, ranging from four to 13 weeks. In each course, there is one production manager, three production coordinators, 13 researchers, three editors, two cameras operators and two sound recordists.

Sky pays the salaries of the trainees placed for both the Sky-funded course and the BBC funded course, as the resultant programmes are a Sky 1 commission. For the BBC sponsored course, the BBC takes on 20 of the placements and Procam TV, a hire company that came on board in 2014 as a patron, gives placements to the crew members of each course; Clarke says that of the 16 students Procam has taken on placement so far, it has directly employed 13. Additionally, Procam donates £100,000-worth of HD equipment for filming to the charity twice a year. 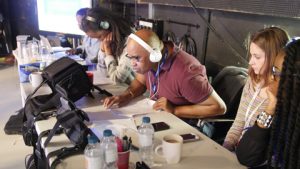 On both courses, the young people involved have to pass their work appraisals and one to ones before being sent on placement. Comments Clarke: “Some graduate the 14-week course but aren’t ready for a placement. It’s hard, but we’re there to support them get to a place where they can go on a placement. Those young people are normally in need of counselling to get to that point, and we work with them to find help. Our minimum commitment is six months of support into employment when they leave us, but that’s the minimum; it lasts forever if they want it.”

In 2017 the project moved its training delivery to the Sky Osterley Campus and trained a total of 76 young people. The charity was nominated for Organisation of The Year by the Diversity in Media Award, and Clarke was also nominated Diversity Champion for the same award. This year, MAMA Youth won the Princess Royal Training Award, topping of its growing list of achievements.

Through MAMA Youth’s training and the subsequent placements students are given, Clarke hopes working class young people can find themselves on an equal footing to get into broadcast: “At the interview stage now, I’m hoping that with young people with practical experience who can hit the ground running, up against the person that’s there because of who the interviewer knows but who has no experience, should be a no-brainer decision.”

As MAMA Youth goes onwards and upwards, Clarke is continuing to push boundaries. With the charity’s partners, he has said that in 2024 they should be congratulating themselves on making a real difference in the industry.

However, once again, problems are rife: “There needs to be a change to the whole attitude of people within the broadcast industry. But the industry hasn’t changed. Black people are leaving the industry in droves. White working class we don’t have figures for, but I’m sure there are the same problems there. I was really down not too long ago, hearing from black girls [former graduates from MAMA Youth] that they’d been asked at work if they’d ever been in a gang and things like that. When I get like that, I have to look for the light. We have to turn it around. I’m on a mission – we are on a mission – to do that.

“We’re looking at keeping the people that are in broadcast now where they are, so they don’t leave in eight years time because they’ve had enough,” continued Clarke. “The people at the top have a real desire to make a change, but it’s not running down the chain. For the black man and the blond-haired Essex girl, it’s about how we’re portrayed; TV affects how we’re viewed. Any industry will want to be inclusive, to have different views around the table, but in media, it’s so important because of what we actually produce. If we get it right, it will rub off into society.”

Clarke is in a unique position, able to talk to working-class young people at a grassroots level on one side, and being able to speak frankly with those at the top of the broadcast arena on the other. He concludes: “The sincerity in the TV industry is there to change things, and for the grassroots level, the goal is the same, but each is talking a different language. We hope to be the link to enable them all to make change together.”