Industry leaders tell the DPP: real barrier to cloud adoption is the fear of change 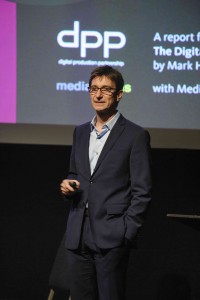 Mark Harrison: “We just haven’t yet learned how to be comfortable in the new commercial and operational paradigm it [the cloud] demands”

The Digital Production Partnership (DPP) has published the output from a special event it held at IBC 2016 at which it brought together more than 20 executives from some of the biggest companies in the media and entertainment industry to ask how we build trust in cloud-based services.

The new report DPP Home Truths: Putting Trust In The Cloud summarises this exclusive IBC discussion – and shifts the debate around cloud from one centred on security to one centred on business change.

“It is routinely stated that the relatively slow take up of connected and cloud-based services is because those services are inherently insecure,” says DPP Managing Director, Mark Harrison. “But these opinion formers argued there’s nothing fundamentally untrustworthy about the cloud — we just haven’t yet learned how to be comfortable in the new commercial and operational paradigm it demands.”

In the new report industry leaders talk about what it takes to build trust in new services. It’s impossible to prevent every security breach, they argued, but companies can become far more effective about how they mitigate the impact – and in the process improve their business operations.

Guest speaker Matthew Postgate, Chief Technology and Product Officer, BBC told the group “We are no longer living in a world of ‘how do we stop this going wrong?’ We’re in a world of ‘how quickly can we recover?’ And that in turn requires a different approach to how we onboard and integrate services.”

Another guest speaker, Larry Kaplan, President and CEO, SDVI, built on this theme: “What we’re facing is far less a technology challenge and more of a people challenge. Together we have the opportunity to fundamentally change how the industry works – to change the relationships of trust that can enable us to implement technology not for technology’s sake but in a commercial context that will transform the industry.”

The DPP held this special executive event at IBC in partnership with video management specialist Imagen. Tom Blake, CEO of Imagen, summed up the mood of the discussion:

“There’s an inertia gap between supplier and buyer that stops them from adopting new technologies. But what I heard here was that trust and security might not be the issue any more. The conversation has now moved on to: how does this industry adopt a faster pace of change to keep up with other sectors who are doing the really interesting things online.”

The new report is the fifth in the Home Truths series of DPP Reports, which bring together leading players to provide thought leadership on key topics. A sixth report, on Content Data, will appear in October.