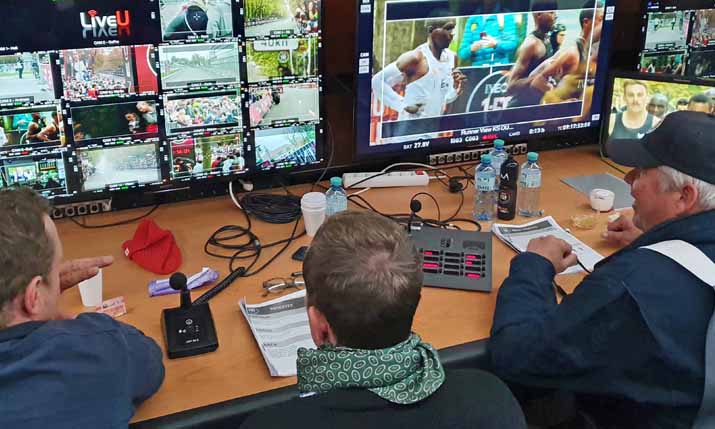 On 12 October renowned marathon runner Eliud Kipchoge made the world sit up, watch and listen as he ran the first sub-two-hour marathon, setting an unofficial world record, clocking a barely believable time of 1:59:40 in the INEOS 1:59 Challenge.

The event took place in Vienna, with Kipchoge running a time almost two minutes faster than previously run. In the build-up to the event, LiveU’s long-time Austrian partner ETAS was contracted by Austrian production company Filmhaus Wien, who in turn was working with Ridley Scott Creative Group, Amsterdam, to provide technical assistance in the production of a documentary about the event.

The challenge was to create an OB truck-based production gallery to allow real-time camera feed monitoring and control. ETAS hired and prepared the production OB truck.

15 ARRI Alexa-equipped camera crews were deployed around the course, linked to 15 LiveU LU600 HEVC portable transmission units. In the truck, there were five quad servers with IFB for wired and wireless intercom. There were three 4K quad multiviewer screens. ETAS also provided the camera crews with LiveU training.

Robert Frosch, account manager with ETAS, who was heavily involved in the project, said: “The director of the documentary footage needed to be able to see, in high quality, each camera view at any given moment. Each LiveU unit, capped at 10Mbps, sent an HD SDI feed to the production truck, and via IFB, the director could talk to each camera operator during the event.

“The actual footage was recorded on each camera. It’s an innovative use of LiveU technology and one that gave the production company the precision and flexibility they required.”

The documentary production crew also used video overlays on the camera feeds, which turned out to be essential. This meant that those in the truck could see when, for example, the white balance needed to be adjusted or a higher frame rate needed to be used for high-speed action shots. ETAS also managed the delivery of the camera footage to the production company.

Zion Eilam, regional VP of sales, EMEA, LiveU, said: “LiveU use is continuing to grow at an exciting rate across the sports market, not only for primary and expanded content feeds, but also for DR. Now we are beginning to see uses like this where our technology allows production companies to precisely control and monitor what they are shooting by creating a production gallery with our technology. This gives directors and vision mixers access to the high-quality images they require at a very affordable price point.”