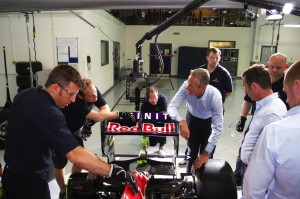 “We’ve worked with Polecam and LMC before,” said Al Peasland, head of technical partnerships at Infiniti Red Bull Racing, “but to have the camera moved into an almost impossible position so quickly by the Polecam during our pit-stop practice sessions within our factory, and then instant replay it’s incredibly beneficial. Analysis after a full practice session is valuable, but instant replay after each pit stop is visual gold. It allows us to analyse in greater detail and make changes during the same session to make our pit crew training as optimum and efficient as possible.”

Jonathan Wheatley is the team manager at Infiniti Red Bull Racing: “I’ve been doing pit stops for 25 years and I can’t believe how much I have learnt in such a short period of time. There are things I suspected I knew and have now had them confirmed. If we’re able to discover something that can save just a tenth of a second in a pit stop, that can mean the difference between winning and losing a race.”

Steffan Hewitt, inventor of the Polecam system, added: “Seeing the reaction of the Red Bull Pit Crew as they watched back their handiwork was a joy. Everyone can see straight away what works and what doesn’t work.

“This sort of work is a real joy. It’s not about broadcast, it’s about teaching, training and analysis, and this is now a really powerful tool. Polecam has started to penetrate this market and it is something that I want to do more of. Medical filming for surgical training is a growth area for Polecam with the likes of Arthrex Inc ordering their third Polecam just for shooting surgical procedures for training surgeons. By generating the content they can make it available globally saving both time and money on flying people all around the world.

“Airbus Industries use a Polecam in their wing testing lab. It allows them to get a camera into places where they cannot get a normal camera by utilising the 8m reach of the carbon fibre arm, even placing the Polecam 20m up a gantry!”