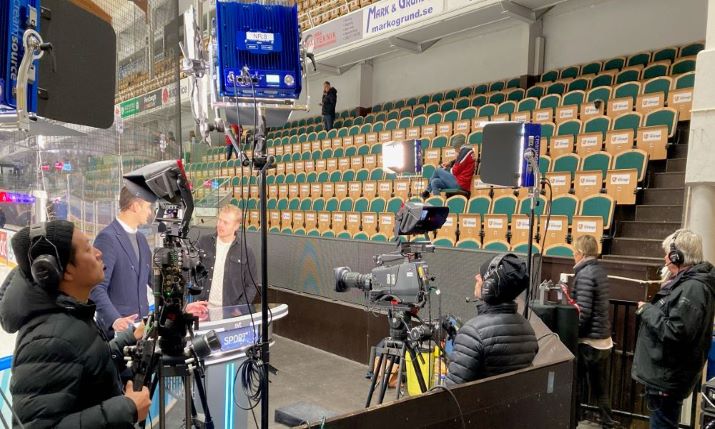 SVT worked with the local organisation committee and the Swedish Ice Hockey Federation to secure this arena and make it COVID-safe for reporters, crew and athletes

As Europe went into lockdown earlier this year, one country stood out for choosing not to. While various restrictions were put in place and live sport was cancelled in Sweden, life was able to carry on as normal in more ways than many other countries experienced.

However, at Swedish national public television broadcaster SVT, the lack of live sport put them in the same position as all the other sports broadcasters in Europe.

Åsa Edlund Jönsson, head of sports at SVT, explains to SVG Europe what happened in the early days of the pandemic: “In the spring, Sweden never went into lockdown in the way other countries in Europe did. We, of course, had a lot of restrictions, among them restrictions around public gatherings, and from late March sports were not allowed to have more than 50 people in the stands. With that regulation, and with the pandemic hitting Sweden hard, no sports were played for almost three months.”

“I am so proud of my department; they never hesitated to switch over to news when sports shut down”

The Swedish championship finals in ice bandy were played on 21 March in front of empty stands. Those finals were the last live sports to be played in Sweden for several months.

Edlund Jönsson goes on: “For us at SVT Sport this meant we had no live sports to broadcast and basically only COVID-19-related sports news to report on for our sports news programmes and online. Almost from one day to another we had to change the whole operation at the sports department and come up with a bunch of new ideas.”

From sport to news and current affairs

Early on in the pandemic, the sports department turned to another genre to keep viewers entertained. In the middle of March, when almost all sports were shut down, the director of SVT news and the sports division, Anne Lagercrantz, asked Edlund Jönsson if the sports department, “could do something on the weekends since you will not be airing sports for a while”.

Edlund Jönsson immediately said yes and made a quick sketch of a new TV format. This was a news and current affairs programme, summarising the news week and answering live questions about COVID-19 from TV viewers, on air for three hours every Saturday and Sunday morning.

“We wanted to be in command of things despite the new situation. I wanted the sports department to feel and know that we acted, that we were not sitting on our hands”

“I showed the brief to a project manager, talked to some members on the staff and five days later we were live with the first episode,” Edlund Jönsson says. “Then we went on broadcasting the new programme, called Helgstudion (The Weekend Show), for 11 weeks.

“The programme was so well received by viewers that we were asked to continue broadcasting the programme this autumn together with the news department,” adds Edlund Jönsson. “What people really appreciated with Helgstudion was that we used the sports tonality when covering news and really gave time for people to explain when interviewed.”

She continues: “I am so proud of my department; they never hesitated to switch over to news when sports shut down. The department showed all that we are true professionals not ‘only’ sports journalists, and the SVT sports department was seen as an inspiration to other sports journalists in Sweden.” 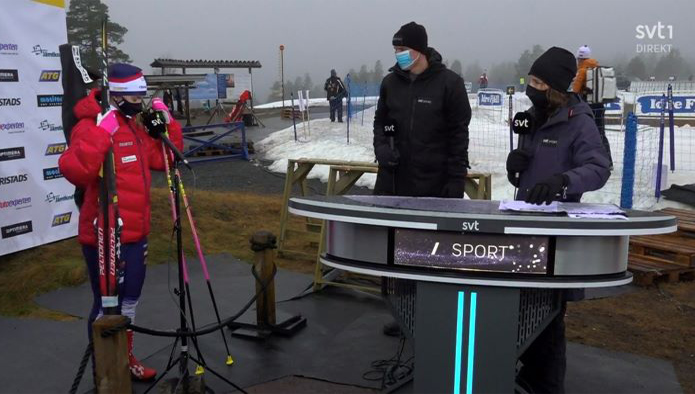 The outdoor SVT studio from the biathlon season opening in Sweden

Another new idea was actually able to bring live sports back to TV for a limited time; SVT Sports created a new initiative alongside some federations in April with the creation of a TV format called The Challenge. This saw the two best players in tennis, table tennis and padel facing each other in a ‘best of one game’ challenge. These events followed all regulations in Sweden and were COVID-19 safe.

Notes Edlund Jönsson: “These events were the only live sports aired on television at this time. We even got international interest for the tennis and table tennis matches and I know that those matches were streamed on international platforms.”

From the beginning of the crisis, SVT decided to take control of the situation it now found itself in. Explains Edlund Jönsson: “We wanted to be in command of things despite the new situation. I wanted the sports department to feel and know that we acted, that we were not sitting on our hands. It was important to me that everyone felt needed, that everyone had the right information about the situation and that we helped wherever needed within SVT.”

“We also wanted to make sure that the TV audience had sports to watch, even if it was different than normal,” she continues. “Therefore we tried to be as creative as possible, even though times were affecting us. And it was very important that we kept on bringing the sports news to everyone, both on linear TV and digital.”

SVT’s sports reporters were also able to continue with a plan instigated at the beginning of 2020 for more investigative journalism, says Edlund Jönsson. “We decided in the beginning of 2020 that we wanted to focus more on investigate journalism this year. When sports shut down in March we didn’t have any matches to cover for our sports news, so instead we had some reporters digging in on the investigative reporting.

“It led to us revealing five big news stories, quoted by all other media in Sweden. And one of the stories, about match fixing, was also produced as a documentary.”

Like many sports broadcasters, SVT also filled the gaps in its schedule with archive footage. Edlund Jönsson says that Sweden’s 1994 FIFA World Cup bronze medal match provided the basis for some gripping TV.

She explains: “This is one of the biggest, if not the biggest, sports moment in Swedish history. Books have been written and documentaries have been made about this magical football summer, but no one had seen the Swedish matches in their entirety since they were live in 1994.

“So we decided to show all Swedish matches again over three weekends, pretending the matches were live. We also had the same anchors hosting the matches as in 1994, we had a big studio, graphics, guests (over video chat), experts, etc. And when the matches were ‘live’ on air, we also had a live report on our website where people could comment; the audience was really great, pretending we were back in 1994 again and making all kind of fun references to that summer.”

She adds that SVT Sports had more TV viewers on those replayed matches this year than when they actually happened in 1994, when the matches were often aired late at night due to the time difference.

The archives also came into play in a magazine show. Edlund Jönsson explains: “We also did a prime time magazine show during six weeks in the summer. In this magazine we went back in time to historical Swedish sporting moments and we had an outdoor studio with guests commenting on what really happened during these historical moments. This magazine was one of the most watched programmes during the summer at SVT.

“On the digital side we also created the ‘Goosebump Generator’. If you clicked on the generator it played a random historical Swedish sporting moment.” 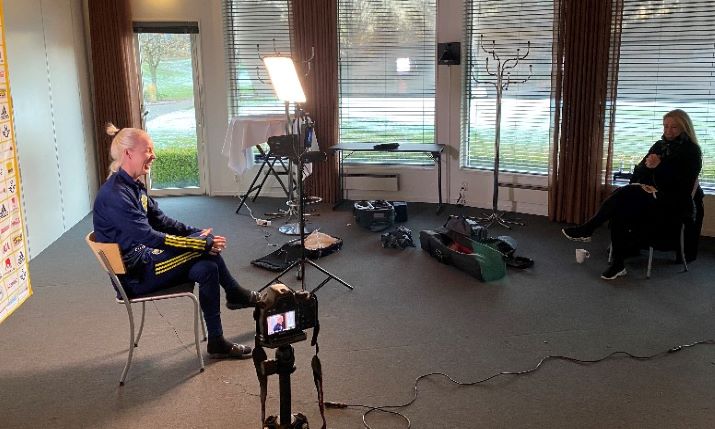 On sports news, SVT began doing interviews over video chat platforms early on. Edlund Jönsson says: “That helped us to have the interviews we wanted and needed to produce good, regular sports news for TV. When producing The Challenge we made sure we had great distance between all members on the TV crew, but we didn’t use robotic cameras.”

On how SVT has adjusted its production workflow to be able to keep going during the pandemic, Edlund Jönsson says: “We have done a lot of adjustments in and around our productions to make them safe for everybody. We have, for instance, moved all sports productions to a bigger master control to make sure there is enough space between the staff. We do all commentary off-tube to minimise travelling and we have added plexiglass between commentators and the expert commentators in the speaker booth.”

She adds that SVT also carries out PCR tests on all staff travelling abroad, and insists that staff use protective masks when needed, and always at international sporting events, even though masks are not covered under any rule, law or regulation in Sweden at this point.

She goes on: “We share reporters with other public service media companies in Scandinavia, helping each other on site with interviews so fewer people need to travel. On productions in Sweden we invest a lot of time securing the arenas, together with the local organisation committee and the federations.

“Almost all staff are working from home when they are not on a live production, while in the office we have secured distance between the desks and in the editing suites. We do a lot of interviews over video calls and always keep our distance when interviewing face to face. We also use microphones on stands when interviewing during competitions to avoid any contact; making sure that the working environment is safe for all is number one priority,” she notes.

Back to live sport and forward into 2021

Edlund Jönsson is excited to have her department covering live sports once more. “We are now back producing live sports again, which feels great! We have the most popular sports TV programme on weekends, Vinterstudion (The Winter Studio) with live sports such as cross country skiing, biathlon and alpine skiing and we are so happy as long as the athletes can keep on competing so we can show live sports to the audience.

“We are also preparing for a super sports year with the Euros in football, the World Championships in ice hockey, Paralympics, news coverage of the Olympics, and more, if it all happens. We keep our fingers cross and continue to act as professionals, like we did from the very beginning.”

As to the biggest challenges SVT has faced in 2020, Edlund Jönsson states: “The biggest challenge daily is working with the staff at a distance; a lot of them are working from home today and only come to work when live sports take place or if they work with the sports news. Even if I try, and they all try hard, it is difficult to inspire and enthuse in the same way when you are on distance.

“Of course, it is also difficult to make five-star programming when we can’t have our crews flying all over the world to meet athletes and do interviews. But, so far, I’m impressed with how my team as managed to come up with new innovative ideas,” she concludes.