Input Media preparing to serve an ace at the French Open 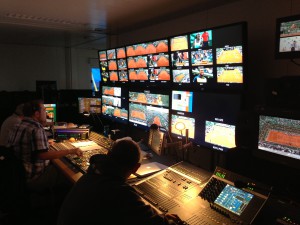 For the past six years, Input Media has delivered the FFT’s (the French Federation of Tennis) programming to its international broadcast partners. That association continues this year when the French Open at Roland Garros gets underway later this month.

“The cornerstone of these services is the International Super Signal (ISS) which is a ready for broadcast feed from the start of play – normally 1100 hours – until  the close of play,” explains David Wood, executive chairman, Input Media. “We access France Télévision’s host coverage of each court and deliver a continuous feed of the best matches of the day. In addition, we provide updates of all other matches during breaks in play and between featured matches, along with a separate highlights programme each night and a raft of feature content and interviews for the web.”

Last year, at the FFT’s request, Input Media instigated a second ISS feed (the ISS ‘Extra’) to allow broadcast partners with a multichannel platform to feature separate matches simultaneously. That facility will be maintained this year with the programming being delivered with full English commentary from a team led by Australian tennis legend and former Roland Garros Champion, Fred Stolle.

“The partner broadcasters are supplied with a full international audio feed, plus a director listen feed which allows them to dip in and out of the signal cleanly for commercial breaks when the director pauses commentary,” says Wood.

The service offered by Input Media is centred on a technical facility designed and built by the company in the temporary ‘Media Village’ provided by the FFT at Roland Garros.

“We build two live galleries, seven Avid Media composer edit suites and a logging and ingest ‘hub’ based around a central HD server based operation and Master Control Room (MCR).”

Wood reports that each year sees changes to the operation to meet additional demands and embrace new technology. “Over time, for example, we have taken the production from SD to HD, created a file based archive and used EVS C-Cast technology to trail alternative methods of distribution. This year, our operation is bigger than ever and we are even streaming the ISS into airports for the FFT.”

The MCR receives over 50 feeds from the host ‘Nodal’ – a mix of dirty and clean court coverage, press conferences, additional angles and specialist cameras such as super high motion and aerial cameras.

The ‘Super Feeds’ begin each day at start of play as ready to broadcast feeds with FFT opening titles produced by Input Media Graphics. During play, Input Media inserts its own presentation graphics to provide the ‘Super Feed’ with editorial updates and upcoming programme signposting.

“We utilise the FFT’s chosen graphics provider’s system. So, IDS provides us with two of their own systems, which incorporate the Brainstorm graphics engine. In this way, we can employ all scoring and statistical data from the central source for our on screen graphics that produces continuity of presentation.”

Gearhouse Broadcast supply equipment for the operation which is based around an EVS infrastructure with file transfer between all edit suites. The central Avid storage is ISIS 5000, with additional near-line storage of more than 60 Terabytes. Editors also have access to Slo-Mo and Hi-Mo from France Télévision both in baseband and file form.

Coverage for the UK

In addition to the international feed, Input Media also provides all the technical facilities and communication for ITV’s unilateral programming at Roland Garros – including planning and production management and coordination. The company also supplies key operational production staff to support the ITV Sport editorial team.

“The ITV studio utilises three cameras with the gallery control handled by a flyaway kit,” reports Wood. “As FFT broadcast partners, ITV has the option to use the international commentary supplied by us on the ‘Super Feeds’ to augment their own commentary team. This is generally on recorded segments of matches not shown live.”

He concludes: “This international service has developed each year and we are looking forward to introducing technological innovations to provide an even more comprehensive coverage for the broadcast partners of the FFT.”