“People are always amazed at the level of infrastructure within our set-up. It’s rather like a Tardis!” That’s how David Wood (pictured), Executive Chairman of Input Media, describes the sports production facility just west of Central London. “We handle a great deal of football coverage and on some occasions, when the Europa League is being played, for instance, as many as 24 feeds come into our building simultaneously. These matches are repackaged and distributed globally to UEFA’s Broadcast Partners.” 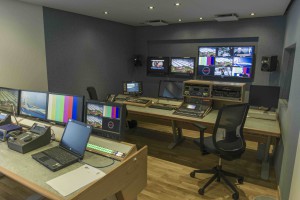 To handle the increasing demands for more comprehensive coverage, the company embarked on a major upgrade project in 2012. Since then, five new HD production galleries have been completed. Now, the last stage of that upgrade is about to get underway, with the work to be completed before the start of the next football season. Like the earlier upgrade, this work will be carried out by systems integrator Gearhouse Broadcast.

“Key to the whole upgrade programme has been the integration of a Sirius 830 router and Snell’s Kahuna 360 multi-format production switcher,” explained Wood. “Nick Symes, our Director of Technology, worked very closely with Snell to achieve the flexibility we needed for such a complex operation. Different programmes at different times require different facilities to be assigned to each control room. By linking the Sirius router with the switcher, we have been able to create an unbelievable level of flexibility when it comes to assigning equipment and services to each of the control rooms.”

Wood says that the result means the features of the Kahuna 360 are used to their full potential. He goes on to report that different panels for the switcher have been developed and these can be assigned to a control room, as required. “For example, if we have a programme that demands two M/E banks, we can simply assign the necessary resources and move the appropriate panel to the required gallery.

“Flexibility and integration have been achieved throughout. Nick Symes designed the control rooms such that the back desk can be used as an edit suite, either with or without a live gallery operation. It means we can add a significant increase in our Avid editing capacity to meet peak time demands and offer a hybrid workflow solution for complex sports turnaround work.”

The final stage of the upgrade involves the facility’s main production control room and its adjoining studio. The project involves installing a new set which has been designed to offer different ‘feels’ for a variety of programmes. The existing control room, studio apparatus room and sound gallery will be gutted and rebuilt to produce an improved working environment and to use the space more efficiently.

“We will, of course, still be using the Sirius/Kahuna combination in the new control room,” emphasised Wood. “In fact, the whole router/mixer infrastructure will be expanded to meet the requirements of the upgraded unit.”

He reports that alongside greater flexibility, the equipment will provide an increased level of resilience. “When it is completed, everything within the facility will be able to be routed to anywhere else in the building.” The upgrade will also mean bringing in new cameras and an audio console. “We are in discussions with Gearhouse and will be making decisions when certain budgetary considerations are finalised.”

Wood explains that the programmes produced within the facility can be quite complex when it comes to audio requirements. “Looking at the upcoming World Cup, for example, we will be taking the world feed from FIFA with the English commentary, but then will be adding in French and Portuguese languages in London. This will involve a sub-mix into the programme mix which will leave the building for distribution to Sub Saharan Africa.”

An additional two-man off-tube commentary booth will be added to the new control room to handle calls for such multi-language productions.

Wood says that a decision about a new graphics system is also under discussion. Currently, Input Media uses a Pixel Power Clarity system “Nick and the graphics department are reviewing options in the light of the ongoing commitments of the company. And, of course, those commitments continue to come from the very highest level in the sports productions world.”