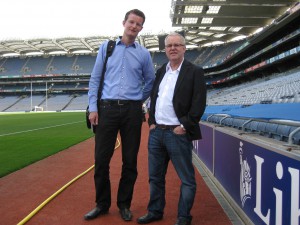 Boasting a capacity of 82,300 people, Croke Park in Dublin is the fourth largest stadium in Europe after Barcelona’s Nou Camp, Wembley in London and the Bernebau in Madrid. It is the home of Gaelic games and the headquarters of the Gaelic Athletic Association (GAA). Between match-day games of Gaelic football and hurling along with multiple non match-day concerts, conferences and events, in 2013 over 1 million people visited the flagship Irish stadium.

A key objective of the GAA and stadium management was to provide an enhanced experience for fans and enable the stadium to show content that could help retain people in the stadium for longer — so for instance at half-time, when the OB coverage is of no interest (or there is no OB TV production involved), the venue could produce and display compelling AV content including separate replays or pitch-side interviews.

The GAA tasked production partner ExterionMedia with a mission to provide the stadium with a new way to feed content to displays around the venue – both the large LED scoreboard screens and the over 250 displays across corporate boxes, bars and conference areas. Technology partner on the project is Irish systems intregrator Eurotek and SVG Europe joined ExterionMedia Operations Director Louise Wyse along with Eurotek Managing Director Kevin Moore, Director Roland de Groot and Project Leader Adrian Back to look through the Ross Video-based production gallery that was installed over the last two months.

Eurotek Group company AVTek has also been retained to operate the system on match-days, meaning Eurotek is both technical integrator and operational crew for the stadium AV and digital signage.

The system is based around a core Ross infrastructure; Carbonite 2ME switcher, XPression graphics, Blackstorm clip server, Ross NK router and glue, plus Yamaha audio mixer and all peripherals. XPression provides the graphics for team selections, stadium messages, straps, and so on. It also feeds the LED screens with the scoreboard. A Ross Inception Social Media system is provided to enable interactive messaging with fans — though the moderating protocols for using this system on match-days had not been worked through at the time of our visit.

A Panasonic AW-E120 robotic pan & tilt camera is mounted in a weatherproof housing outside, above the production gallery to provide in-stadium shots such as close-ups for Face in the Crowd, Happy Birthday and so on. A Final Cut Pro edit suite is also in place to prepare highlight clips, and two Telestream Pipelines are used for ingesting media — both advertising and match-day feeds. A Telestream Vantage is used to transcode media to any format needed.

The system takes the OB feed for match coverage, but the show producer can cut to an advert, or any other source, for contentious replays or in-house messaging. A Hawkeye system is also available as a source for Hawkeye analysis decisions. Other components in the adjacent racks room include Crystal Vision frame synchronisation for the big screens; storage from fledgling Belfast-based company Rockstar; Matrox IO including audio, connecting to Mac Thunderbolt; and Argosy cabling throughout.

The whole system is under Ross Dashboard control, so the operators use a touchscreen to select the graphics, clips, etc., and they can even control the switcher if required. Dashboard has proven to be a big benefit of the overall system, and the integration Ross has achieved with it is something Eurotek believe has not yet really been fully appreciated in the broadcast sports market.

“One thing I think Ross could big-up more is that the Dashboard control of all the components is absolutely fantastic,” said Roland de Groot. “It’s way better than we anticipated at the outset. You’ve got control of the router, video servers, the still store, glue – it’s basically one PC, and it’s all you need to control the entire system.

“We were originally planning to use the data coming off the old scoring system, and then show that as a live data feed on the scoreboard on the Ross graphic system. But Dashboard actually allowed us to build a customised user interface for the scorer, and just present the option of going ‘point-goal, clock-start, clock-stop’. So we can create unique interfaces for any user on the network in the stadium and allow that data to be made available to the right graphic system,” said de Groot.

For distribution and synchronisation the system uses Ross OpenGear. One of the key components sitting on OpenGear is Lynx Technik Yellobrik conversion.

“We do a lot with the Yellowbrik glue in the stadium,” said Adrian Back. “We have a lot of interconnectivity from the OB, up and down. We also provide feeds in and out of Hawkeye. And all the connectivity boxes we’re planning to deploy pitch-side will be linked back via fibre Yellowbrik transmission. And there are a number of SDI-HDMI conversions from Yellowbrik that drive various monitors and preview monitors around the site.

“We’re just about to start another project here,” added Back, “which is the beginning of the IPTV deployment for TV distribution around the stadium. The integration of the Exterity system with the Ross production system is going to be quite cool, because we’re going to be able to have content immediately available in the corporate suites, effectively video on demand. They’ll be able to see a replay of the first half, or maybe an edited package.

“We have a full Apple Final Cut Pro edit system as well. So in conjunction with the Telestream Pipelines we can actually do editing on the fly, for highlights packages – that can be transcoded and put onto the VOD servers so people in the corporate suites can watch highlights almost immediately. Or, a reporter/editor on the pitch could cut a simple Final Cut Pro package themselves pitch-side, send it up to the system here and it can be transcoded and played out almost live within the stadium.”

How long has this project been in gestation? “Well it goes back almost two years,” said Louise Wyse. “We took a holistic approach to how we were going to tackle an aging technology infrastructure. It was about how that could be done.

“We felt all along that Ross was going to be the solution. Obviously Eurotek had to go and investigate it — but that journey culminated in the stadium director, operations director and the president of the GAA going out to the Amway Center in Florida last October, where they saw for themselves what could be done with a system like this. They were blown away. 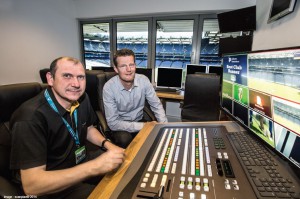 “Of course we had to make several presentations to several different departments within the GAA in Croke Park. I went over to IBC in Amsterdam last September and met the Ross guys. And the Ross people themselves came over and spoke to the GAA,” said Wyse.

“There’s been great buy-in from Ross to support the project, from David Ross on down, a lot of enthusiasm,” said Kevin Moore. “For instance, Ross Video held their internal European staff meeting here and they had their European dealer meeting here last month – in this stadium. So it was great for us because we also had all the product managers here on-site while this was a work in progress.

“Many manufacturers talk about open protocols – but how many times do you go to integrate a system and your heart just breaks,” Moore continued. “It does not do what it says on the tin – but this system does. There have been a few bugs, of course, but if you have a problem you call a guy in Canada whom you actually know, because you’ve met him! It makes a huge difference.”

“We’re very comfortable with this system now,” added de Groot. “If we were to replicate it, we know it will work. With any system of this complexity there’s going to be one or two glitches. Ultimately, to us, working with these products, you just feel comfortable – you don’t have sleepless nights wondering if it’s going to work.”

“We act on behalf of the stadium,” said Wyse, “and they come in here to the gallery and say ‘this is all terrific, but what can it do?’ The challenge is to actually show them there’s a lot more stuff that this system can do!

“I’m talking about recording and data collation and the ease of handling information and how fast it can be,” said Wyse. “Now we can take in YouTube videos, all this kind of thing. The challenge is, that the sky’s the limit.”