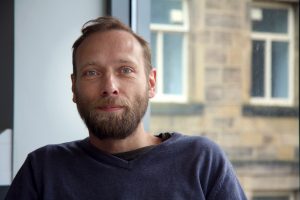 From the implementation of comprehensive support for IP-based production, to making accommodation for the probable future demands of immersive audio mixing, the last few years have been extremely eventful for the Calrec R&D team in Hebden Bridge, UK. More than ever, supporting the specific way that broadcasters wish to work, when and where they wish to work, has become of the utmost importance – so it’s probably just as well that, as Calrec product manager Pete Walker observes, flexibility has always been a fundamental “part of Calrec’s ethos”.

Broadcasters, continues Walker, “all like to work in different ways, so flexibility is key. With technology changeovers it is important to support users by maintaining and supporting familiar workflows whenever possible. The technology platform should be transparent to the operational user.”

Type R – a new modular IP-based radio system showcased last month at NAB 2018 – is a case in point. Utilising standard networking technology, Type R is deployed with configurable soft panels – a fader panel, a large soft panel and a small soft panel – that can be tailored to individual operator needs. Each panel is compatible with COTS hardware and powered over Ethernet to keep cabling to a minimum, and is designed to have native IP connectivity.

“The panels [make it possible] to filter controls for operational staff to match the skillset of individual users while giving engineering staff full access to more in-depth parameters,” says Walker. “So the Type R core can power up to three independent mixing environments, each with its own independent DSP resource, and connectivity is over standard COTS hardware. Whether used as independent studio consoles, microphone processors or utility mixing, the ability to use multiple mixing engines combined with an AES67 compatible network provides flexibility to keep pace with changing requirements.”

The end-result is a console which constitutes a significant milestone for several primary reasons. Walker notes: “This is Calrec’s first console with a native IP backbone, which for Type R provides an alternative infrastructure for future expansion. It is also Calrec’s first radio console designed for a global market – a whole new market for Calrec.”

Underlining the current activity levels of the Calrec R&D team, Type R was actually only one (admittedly important) element of the company’s NAB 2018 appearance. Also on display was the Brio 12 desk, which has the same feature set and mix capabilities as the larger Brio 36, and meets the demand for a broadcast mixer that can be used in very tight spaces like small vans, compact rooms and production automated environments. At under 450mm wide it is slim enough to fit into standard racks or be stowed out of the way when not in use.

There were also a number of live remote production demos featuring RP1, the Remote Production Unit that was highlighted during the Remote Production Forum event held before SVG Europe’s Sport Production Summit in Amsterdam last September. According to Walker, the RP1 product “directly addresses an increasingly prevalent requirement for high quality content from remote locations without having to send lots of equipment and staff out”. 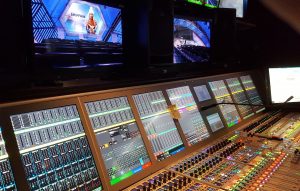 Calrec desks and RP1 remote production units were used by NBC throughout the recent Winter Olympics in Pyeongchang.

New features included with the latest version of the RP1 software include a 2-band filter and 4-band EQ, expander and gate facilities, compressor and side-chain EQ facilities, direct output for all remote faders (up to 5.1 wide), and remote auxes via Calrec Assist. In addition, “the new software also provides VCA master control from the host console and pairing of transmission and remote faders so that any fader/cut changes are applied to both TX and IFB paths on to remote faders and remote auxes. A new ‘blocking’ mode prevents the RP1 unit from affecting the paired transmission faders, while the ‘independent’ mode ensures the RP1 can operate independently of the host when required.”

As with all leading console system developers, Calrec maintains an ongoing dialogue with a number of key broadcaster and service provider clients in order to understand both their current requirements and how these are likely to change in the future.

“Increasingly, the broadcast market is better connected and more integrated than it has ever been, [and] this applies equally to relationships with other technology providers [as] it does to customers,” says Walker. “It has always been Calrec’s policy to work closely with its broadcast customers; as a manufacturer who designs equipment for long-term capital investment, it is important to be able to predict future trends and have a clear roadmap for future development. In simple terms, technology providers must provide for requirements now and in the future. [Hence] Calrec works closely with a number of key broadcast customers early in the R&D development process to help drive market requirements.”

The aforementioned Type R radio desk is a case in point, with Calrec “starting to talk to commercial radio stations two years before launch, and undertaking primary research with broadcasters from Europe, APAC and the Americas, as well as seeking practical advice from independent radio contractors.”

Ongoing developments in remote production are also nourished both technologically and in business terms by regular conversations with broadcasters. Calrec, says Walker, “works very closely with a number of international broadcasters to help solve the challenges of remote broadcasting. [As a result of this] Sky TV in the UK has used RP1 to remotely mix a number of live sporting events, and earlier in the year both the NBC and NBC Olympics utilised the RP1 to provide remote mixes of the events in Pyeongchang in South Korea.” 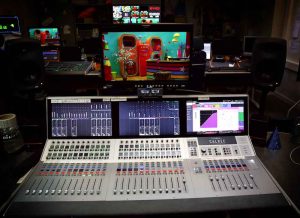 The purchase of a Summa desk for HQ6 means that all seven TV studios at dock10 in Manchester are now standardised on Calrec consoles.

Specifically, the RP1s were used to create local monitor mixes on the studio floor at the Pyeongchang IBC, as well as outside sources in multiple locations. These sources were mixed and managed in a remote studio, but created locally at the IBC.

Walker confidently expects the remote production trend to continue and achieve traction in other areas of the market since it holds the potential for “huge cost savings and efficiency improvements. [Simply put] remotely controlled, IP-connected kit allows the expensive equipment to be in a broadcast facility where it can be utilised more effectively. Control rooms can switch between jobs and remote venues, with plenty of engineering staff and operational cover on hand. Plus, operators can work in the same daily environment, without travel expenses and set-up time.”

If there is a sense of a growing momentum behind remote production, then much the same can be said of immersive audio. Whilst it is already a known and established concept in the cinema world, it is now beginning to make serious waves in broadcast. Once again, the recent Winter Olympics provide a case in point, with the MPEG-H encoding format being used extensively during the Games. At the consumer end, Samsung and LG are among the TV brands to now support the format.

Regarding its own capacity to support immersive mixing, Walker says that Calrec is already actively working in an immersive environment, “both in terms of adding height to the surround field and also object-based audio, which of course has different considerations in terms of console design.”

Calrec consoles do now support immersive monitoring, while the company has been working closely with broadcasters who are working in these mixing environments, for example UK OB specialist Telegenic, which is producing 5.1.4 outputs with objects for Sky TV. The company also continues to work in close conjunction with technology partners like Dolby, DTS and Fraunhofer, and participate in relevant trials.

“From a console design point of view, monitoring is obviously key [to successful immersive audio working], but a move towards native immersive paths is inevitable – in much the same way as when the industry made the move from stereo to 5.1,” says Walker.

Also surely inevitable is the ongoing, increased need to collaborate at the R&D stage with other vendors to ensure that video and audio can work together seamlessly in IP-based environments. “IP is a real driver of this cooperation,” he confirms, “and organisations like AIMS are vital to ensure that manufacturers are all on the same roadmap and moving towards a common goal. For example, Calrec’s work with Grass Valley and Net Insight, alongside working with broadcasters like Pac-12 and Sky TV, has helped develop a detailed understanding of both the user requirements for remote production as well as the practical technical considerations. This kind of cooperation is vital to bring products to market in a useful and efficient manner.”