Inside the Lab: Genelec R&D Director Mäkivirta on design ‘responsiveness’ and monitoring milestones

From IP connectivity to support for 5.1, 9.1 and now immersive audio environments, the expectations of the modern studio monitor have evolved substantially in recent years.

Finnish company Genelec has consistently been to the fore of this wave of innovation, due in no small part to the efforts of its Research & Development Director, Dr. Aki V. Mäkivirta, who recently took time out to speak to SVG Europe about Genelec’s long – and very much ongoing – R&D journey.

Although Genelec monitors now have a presence in nearly every major broadcast operation in Europe, the company has remained relatively compact operationally. For Mäkivirta and his colleagues there is a general feeling that this has facilitated a degree of flexibility with regard to emerging technological trends and requirements that might not be possible in larger organisations.

“Without a doubt I would say that it has had a positive effect on our responsiveness,” he confirms. “Consider the fact that we do have a relatively wide product range, and that would not be possible to sustain if we weren’t pretty agile in reacting to different customer demands. Also, Genelec being a small, very ‘flat’ organisation means that it is easy to have a smooth and efficient passage of information between different departments.”

Mäkivirta is certainly well placed to judge given that he has been an integral part of the team since 1995 – more than half the life of Genelec itself, which celebrates its 40th anniversary in 2018. Within the R&D grouping, Mäkivirta explains that there are several primary teams, each of which maintains a constant dialogue with the others in order to ensure that “the new ideas we have are entirely understood, and that we will be able to guarantee the level of performance needed for each new product.”

So, he adds, “we have an electroacoustic team taking account of the fundamental electroacoustic design issues; a mechanical team focusing on that aspect of the design; and then separate teams for electronics and software.” Working in close cooperation, the teams proceed through initial discussions on to basic designs and then extensive prototyping and, finally, the finished product in a process that can take months or several years – depending on the complexity and/or urgency of the requirement.

Mäkivirta adds: “The onus is always on delivering the best product we possibly can, and one that fulfils all the objectives we lay out for it.” Numerous landmark developments – including the SAM (Smart Active Monitoring) Studio Monitors and GLM (Genelec Loudspeaker Manager) software – attest to the effectiveness of that philosophy.

Not surprisingly, SAM – which has been applied to Genelec studio monitors of various shapes and sizes – looms large among the innovations identified by Mäkivirta when invited to select some specific milestones. “In essence, SAM adds another layer of intelligence to monitoring; specifically, an awareness of the room influence and an efficient way of doing that without the need to employ specialists to do so,” he explains.

The SAM technology is based on Genelec’s GLM software, which is now in its third iteration. GLM makes it possible to calibrate and control monitor systems to allow them to be fully optimised for their acoustic environment. Tightly integrated with the advanced internal DSP circuitry which all SAM monitors and subwoofers are equipped with – from the small 8320 to the large 1236A – GLM 3 offers beta cloud services, reference level listening features and several other refinements. The result, says Mäkivirta, “is the most powerful version of GLM yet”.

“Essentially the GLM software makes it possible to take complex measurements of the acoustics in a room and then undertake the calculations required to make the compensations necessary for rendering the monitors neutral in a given space,” says Mäkivirta of the GLM concept, which has been the subject of continual refinement since 2006.

Both SAM and GLM are “fundamental developments,” he continues, “and help to change the ways in which monitor loudspeakers can serve the customer. I would also highlight the advocacy of bass management in our designs. Obviously we have long had subwoofers that include bass management in the subwoofer, and more recently we have facilitated the distribution of bass management between loudspeakers and subwoofers.” Of course, being able to achieve playback of the full audio frequency range will become even more critical as we move into the immersive audio era – more of which anon.

The most recent fruition of SAM and GLM development is The Ones series, which includes the 8331 and 8341 – billed upon their introduction in 2017 as “the world’s smallest three-way coaxial monitors”. Along with the previously introduced 8351, they comprise a complete coaxial range that, says Mäkivirta, successfully resolves the issues that can be experienced with point source designs – notably, limited frequency range, low SPL and uneven dispersion.

“These three-way coaxial monitors constitute a very important step for us, and they directly address the quality and position of reproduction required in a variety of broadcast environments,” he adds. “They are also very easy to deploy in challenging production environments as they can be set up and calibrated so quickly.”

Immersive for sports and more

Hardly uniquely among his peers, Mäkivirta is enthusiastic about the possibilities heralded by immersive audio. On a product level, Genelec is certainly ready to support immersive for sports, music recording and other applications with GLM and SAM, which can support Dolby Atmos and any other reproduction environment, “up to a total of 45 monitoring speakers and subwoofers in one room – in other words, all of the systems in existence today.” 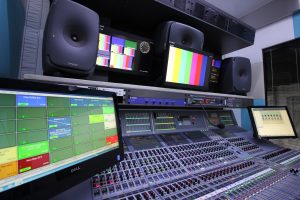 Genelec has provided full 5.1 systems for multiple NEP UK-operated OB trucks, including Pacific, which was first used in summer 2016

Notwithstanding inherent challenges in terms of studio space and capacity, Mäkivirta says that setting up an immersive system in a professional environment is not as tricky as the outside observer might suspect. “It is actually relatively easy and straightforward. The main issue is to take account of equalising the sound colour of the individual monitors, level and time alignment to create a reliable monitoring environment that means the user can feel fully assured of their production or editing decisions.”

As far as specific broadcast environments go, Mäkivirta believes that “immersive for sports has great promise, and there are some interesting developments taking place on the music recording side too; some of the immersive recordings I have heard lately have been very nice. I am sure we will see the creation of some fantastic environments that would simply not be possible with single-layer surround presentations.”

In particular, Mäkivirta is intrigued to see what the future might hold for the 22.2 audio component of 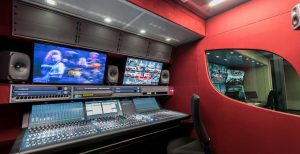 Italy’s ARET was one of the early adopters of Genelec’s latest product series, The Ones, fitting an OB truck with the 8331 point source monitors last autumn

NHK’s Super Hi-Vision UHD technology, but admits that immersive audio is likely to take quite a while to achieve any substantial degree of mass-market adoption.

“It is hard to believe that too many people will be installing extensive multi-layer immersive systems; more probable are soundbar-type installations with some virtualised speakers,” he says. “But I think we could see [those more limited type of set-ups] become popular, and of course there are also opportunities for immersive audio experiences with headphones; although in principle a tempting way of delivery, more work is needed to make it sonically reliable. So there is a lot going on in terms of new developments, and myself and the Genelec team will certainly be keeping a close eye on the progress of immersive audio.”