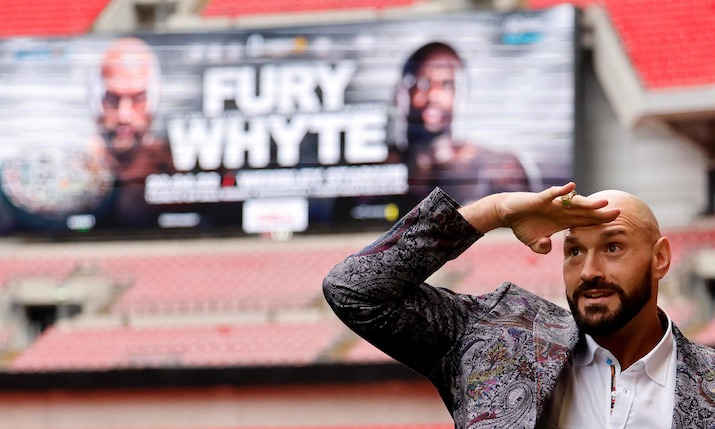 World Boxing Council (WBC) heavyweight title holder Britain’s Tyson Fury poses on the pitch after a press conference at Wembley Stadium in west London on 1 March 2022. Fury had his first bout on home soil in nearly four years when he defended his World Boxing Council (WBC) heavyweight title in an all-British clash against Dillian Whyte at Wembley Stadium on 23 April (Photo: Tolga Akmen/AFP)

EMG UK recently produced the Tyson Fury versus Dillian Whyte fight at Wembley Stadium, London, for BT Sport in which the new Sony HDC-F5500 camera had its world-first debut.

The camera had its inaugural live sporting event outing on 23 April as part of a UHD HDR production.

Says Martyn Edwards, project director for the event at EMG UK: “We were excited to debut the new Sony HDC-F5500 camera, in lieu of the normal HDR-4300 for camera one, which was a world first. The super 35mm sensor and global shutter produced spectacular cinematic HDR pictures for the global audience.

He continues: “We worked with Sony and BT Sport to deliver the first European and UK live production with the Sony F5500 camera system at the Fury versus Whyte fight. It was a fantastic opportunity to experience the integration of the new system into our regular UHD HDR workflow. We were very impressed with the camera’s performance and the way it slotted into our operation.”

EMG also deployed a Riedel Bolero communication system for the first time on BT Sport Boxing. Says Edwards: “The system performed excellently and was very well received, and we are exploring the possibility of extending its use on these types of events.”

Edwards comments on the remote production workflow used for the BT Sport fight: “EMG deployed an array of different remote models for BT Sport, [all of] which are based on the individual requirements of each specific event. For this fight a hybrid remote production solution was chosen. This allowed key staff such as match director, vision mixer and producer to be on site, but VT remained safely in the EMG Remote Operations Centre (ROC) in High Wycombe.”

The EMG ROC is connected to the trucks on venue by BT Media & Broadcast’s dedicated high speed and high availability fully redundant media network. “Our sister companies ACS and Broadcast RF provided a UHD helicopter camera,” adds Edwards. “It was shared between the boxing and the Arsenal versus Manchester United football match. The helicopter flew between venues setting up for this massive day of sport for BT Sport. We had receive sites at both venues, but ultimately the helicopter could be downlinked by either venue, from either venue. The helicopter was then on station over Wembley for the main event.”

EMG provided BT Sport with two trucks to cover this major boxing event, with a total of 5.5 hours of live coverage going out before, during and after the fight. Nova 121 was used to produce the dedicated fight feed for both BT Sport and worldwide rights holders. Nova 123 produced BT Sport’s presentation coverage, which included an onsite studio platform, pitch side reporter positions and commentary. Additionally, EMG provided Nova 111 to support ESPN’s unilateral production, and facilities to produce the screen feeds on the canopy.

Says Edwards: “We used the Wembley Stadium cable infrastructure where to get the feed back to the compound where possible. However, the difficulty with covering boxing at a football stadium is that the ring goes over the centre spot, so there is no cabling close by. Ultimately, the majority of the SMPTE and other cables were run in by our rigging team in the end.”

On the cameras used for the fight, Edwards says: “BT Sport has a house style of beauty shot. This uses a Sony F55 with CA4000 SMPTE back, coupled to a cannon ultra-wide lens. This was used to good effect with the augmented reality (AR) output that was generated for this event. The AR supplied by Moov was also linked with the Spidercam. We used media converters to deliver the positional data from the Spidercam to Moov who were operating in the fight OB truck.”

Comments Edwards: “We were excited to see the Sony 4800 Hi-Mo cameras back. We haven’t used those in the EMG ROC post-COVID-19. This meant we had to specially engineer the workflows through the ROC. This required additional SDI circuits and data connectivity via our Layer two pipeline from BT Media and Broadcast.

A company called Focus Rigging and Scaffolding built a spectacular studio platform on the middle tier of seating for BT Sport. “This gave a great back drop of the canopy and ring. This was shown off with a float camera and a medium sized jib, along with tripod mounted cameras,” notes Edwards.

EMG supplied 65 crew across this event, totalling nearly 200 crew days across the event.