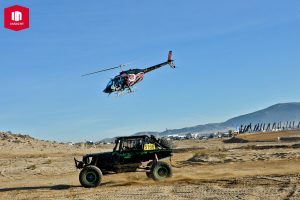 INSIGHT TV, a producer and broadcaster of adventure travel and extreme sports genres in unscripted 4K UHD HDR, is launching its new 8×60 minute, high-speed reality show King of the Hammers on 22 July at 20:10 CET, on INSIGHT TV channels and INSIGHT.TV. King of the Hammers goes behind-the-scenes at the world’s toughest one-day off-road race and is the largest event of its kind in North America. It follows the highs and lows of the 485 drivers who face huge dangers as they speed across the desert and take part in Rock Crawling, an extreme form of off-road driving over harsh terrain.

King of the Hammers is the first show that INSIGHT TV has shot in HDR, providing the highest quality viewing experience. It was produced in partnership with UK factual independent production company LSPTV. Filmed against beautiful backdrops at eight different USA-based races, from the Blue Mountains of Kentucky to the Californian desert, conditions for filming in the hot and dusty terrain were often challenging. Find out what makes the drivers tick, how they build their cars, what their families and friends think and experience the excitement and drama that goes into taking part in such a crazy sport.

“Anyone who’s interested in high-speed car racing will love this show but it’s actually much more than that,” explains Arun Maljaars, INSIGHT TV’s Global Content Strategy Manager. “We really get behind the action and bring the lives of these guys to the viewers at home. They get to see them eat, sleep and breathe the King of the Hammers lifestyle. Once seen never forgotten!”