Intel has signed a deal with the International Olympic Committee (IOC) to join ‘The Olympic Partner’ (TOP) worldwide sponsorship program through 2024. As part of the agreement, Intel will provide technological and content support for the Olympic Broadcasting Services host-broadcaster operations and for Olympic Channel.

It will also deliver real-time and on-demand virtual-reality experiences at 16 events, along with a 5G technology showcase, at the 2018 Olympic Winter Games in Pyeongchang, South Korea. In addition, the company’s drone light show, FreeD 360 replay (including the ‘Be The Player’ perspective), and artificial-intelligence technology “will be rolled out as the multiyear partnership evolves”, according to Intel’s announcement.

The first Olympic Games activation will take place at Pyeongchang 2018 in February, where Intel technology will present live and on-demand virtual-reality experiences at 16 events. The Intel True VR offering will mark the first live virtual-reality broadcast of the Olympic Winter Games. 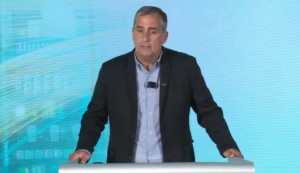 Although which events will be produced has not been finalised yet, Intel CEO Brian Krzanich cited sky-jumping and figure skating as compelling events for a VR experience. He also said that Intel True VR will be compatible with the majority of the phone-based VR consumer platforms currently available and at least one of the tethered systems in time for Pyeongchang 2018.

Working with the IOC, Intel’s contributions to the Olympic Movement will include technology developments that will be rolled out over the course of the multiyear partnership.

Intel’s 5G platforms will be used at the Olympic Games to demonstrate how 5G will transform communications over the next decade. In 2018, Intel will partner on what is expected to be the first 5G showcase, setting the stage for global deployment of 5G.

Intel 360 replay technology will allow fans at the venues to experience Olympic moments from every angle. In the future, TV viewers at home will be able to experience what it’s like to be at the Olympic Games in a front-row seat or choose from many viewing points in the venues. In addition, Intel’s Be The Player technology, which was featured in Fox Sports’ Super Bowl LI telecast, will be deployed at the Olympics.

Intel drones will play a major role, including the drone-based light-show technology, which will create never-seen-before images in the sky.

“As a result of Olympic Agenda 2020, the IOC is forging groundbreaking partnerships,” said IOC President Thomas Bach. “Intel is a world leader in its field, and we’re very excited to be working with the Intel team to drive the future of the Olympic Games through cutting-edge technology. The Olympic Games provide a connection between fans and athletes that has inspired people around the world through sport and the Olympic values of excellence, friendship, and respect.

“Thanks to our new, innovative global partnership with Intel, fans in the stadium, athletes, and audiences around the world will soon experience the magic of the Olympic Games in completely new ways.”

As a Worldwide TOP Partner, Intel will support the National Olympic Committees and their teams around the world, as well as the IOC and the organisers of the Olympic Games. Intel’s global activation rights will include Pyeongchang 2018, Tokyo 2020, Beijing 2022, and the 2024 Olympic Games in a city yet to be selected.

At the press conference last week, Krzanich revealed that negotiations between the IOC and Intel began at CES in January and have progressed rapidly. “We are excited to join the Olympic Movement and integrate Intel’s innovative technologies to advance the Olympic Games experience for fans around the world,” he said. “Through this close collaboration with the Olympic family, we will accelerate the adoption of technology for the future of sports on the world’s largest athletic stage.”