Inter BEE, the Japanese equivalent of the NAB and IBC shows, is always a unique event for those involved in the broadcast and production industry.

It is squarely focused on the needs of the Japanese broadcast industry, and that makes it an interesting mix of a commitment to known technologies (one of the big themes this year was 12-Gig SDI) and a commitment to the future with (another big theme was 8K, which is now a reality for consumers in Japan). 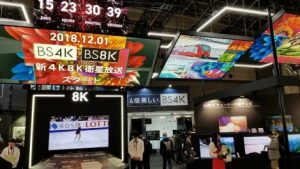 Let’s start with the big news of the official launch of 8K broadcasts (as well as 4K) via satellite. The 8K signal, called BS8K, requires 100 Mbps of bandwidth to be delivered, and the broadcasts are available 12 hours a day. That 12 hours, like the early years of HD in the U.S., comprises a mix of original full-resolution material as well as upconverted material (audio is in 22.2-channel surround sound).

Highlights so far include an 8K broadcast of 2001: A Space Odyssey as well as a live broadcast from the Vatican on Dec. 2. NHK also continues to roll out 8K production units that can be deployed around Japan, and the goal is to have five in operation by the time the 2020 Tokyo Olympics begin.