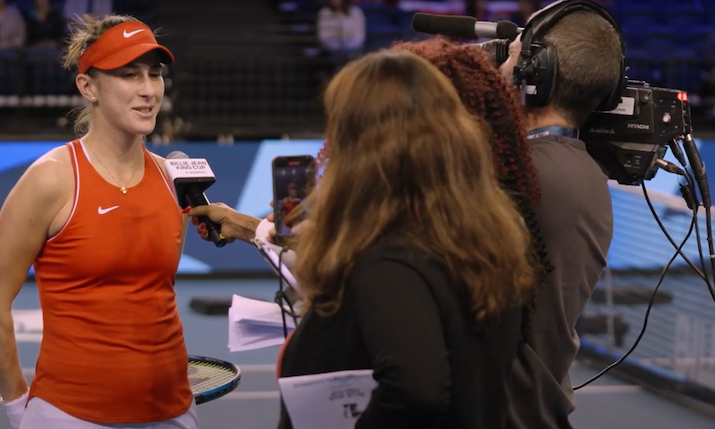 Gravity Media has returned as the International Tennis Federation’s (ITF) host broadcast partner for the 2022 Billie Jean King Cup Finals, which took place in Glasgow from 8-13 November. This was the second year in a row that Gravity Media was named as host broadcaster following the Prague event in 2021.

Previously known as the Fed Cup, the Billie Jean King Cup is the largest annual international team competition in women’s sport. A joint team from Gravity Media’s UK and France bases joined forces to support and deliver the production.

Over the course of this week-long event, Gravity Media deployed two of its state-of-the-art rigid trucks, with 24 cameras capturing the action across both courts using Gravity Media’s NetCam speciality camera solution. NetCam is a dual UHD camera platform which offers full remote shading and racking, enabling it to be mounted quickly and easily to any net to capture all the elements of the games.

Working alongside the ITF, Gravity Media created a hybrid approach for the production, with the world feed being cut on-site for over 40 broadcasters in 196 territories, which is a record amount of broadcast coverage in Billie Jean King Cup history. Meanwhile, the additional commentary was added alongside editorial content remotely at Gravity Media’s Production Centre in Chiswick, London for rights holders.

Brooke Hockley, broadcast manager at ITF, commented: “The Gravity Media team have an unprecedented understanding of the unique event format of the Billie Jean King Cup as well as tennis and large major events in general. The team and their knowledge have fulfilled both what the ITF want to showcase from the event and broadcasters’ needs. It’s been wonderful to work with such an experienced team who utilise a complete end-to-end solution, from the technical side and production to the editorial deliverables with fast turnarounds, bringing to life all the things required to bring the Billie Jean King Cup by Gainbridge Finals to as many fans across the world as possible.”

Beth Lowney, business development manager at Gravity Media, said: “I am delighted to be back working closely with the ITF to deliver the Billie Jean King Cup Finals. At Gravity Media, we continue to be devoted to women’s tennis and even more so, the social and ethical commitments towards gender equality across the industry. With a strong female talent working for Gravity Media on this project, we look forward to building a long-term partnership with the ITF and helping them create a successful and memorable competition.”

Ed Tischler, managing director at Gravity Media, said: “Returning for another successful year, Gravity Media is proud to be delivering an innovative full-turnkey solution, which is combined with the very best of our production and technical expertise. On behalf of the entire team, I would like thank the ITF as we are delighted to be further expanding both our production and technical services for this very special event.”