Boxing clever: Sky Sports’ Jennie Blackmore on balancing being a parent with the thrill of live sports production 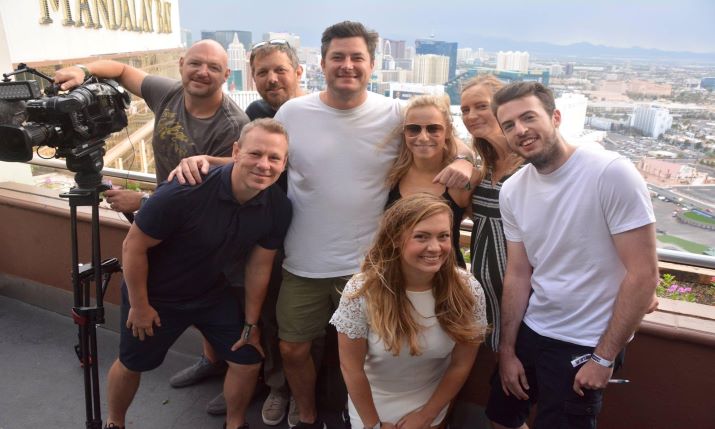 Sky Sports’ head of production for football and boxing, Jennie Blackmore on-site for Mayweather versus McGregor in Las Vegas 2017 [seen here in sunglasses]. The team were on the roof of the Mandalay Bay Hotel, overlooking the Vegas strip, filming one of Sky Sports’ build-up shows

Inspired by her love of cricket, Sky Sports’ head of production for football and boxing, Jennie Blackmore, has gone from climbing gantries with doughnuts for camera crew strapped to her arms, to the top of her game.

Her passion for cricket inadvertently led her to a career in sports broadcasting: “While at university, I had a job as a steward at Lord’s on match days, which required me to be on-site from 7am. So I would sit in the stands, drinking my morning coffee while watching the set up by the TV crew, and instantly became fascinated by the process; envious that this was their full-time job.”

Today, her love of sport combined with her role at Sky Sports keeps her coming back for more. She comments on what draws her to sports broadcasting: “The reactive nature of the job plus the thrill of a live event are amazing. You never lose touch with that no matter how many events you do. I still get blown away when we’re at a packed Wembley Stadium or an iconic, stunning venue like Augusta for The Masters; whether I’m there in person or watching the output at home knowing that it’s our teams’ hard work that is bringing it to our screens.”

When she left university with a degree in English Literature and Media, “my love of playing cricket inspired me to repeatedly hound the executive producer of Channel 4 cricket (Sunset+Vine) on the first day of every month, like clockwork”.

“With the production executive role and now my head of production role, I had to look at everything with a wider perspective. I was no longer immersed in just one sport or event at any one time; I had a whole team of people with varying roles to think about and multiple sports to take into consideration with every decision that was made. That mental switch took time to adapt to”

This determination worked in her favour, she says: “I’d send him my CV, a copy of my dissertation on, ‘The Language of Cricket Commentary in TV and Radio’ (which I’m sure he enjoyed immensely,) and a plea for any available role on his team. So that was where it all started. After seven months he called to ask me in for an interview and subsequently gave me the role of production secretary.”

Blackmore comments: “The production secretary role was a combination of administrative work and being a runner on site at OBs. I loved every second of it, even climbing ladders to gantries with bags of tea and coffee in my mouth, and doughnuts strapped to my arms.” 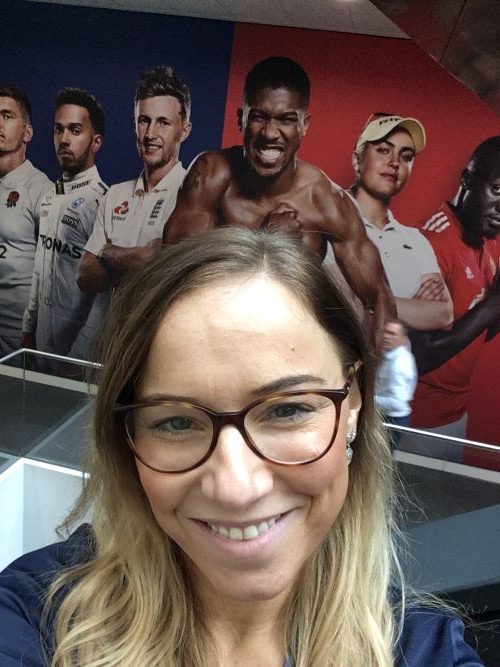 During the cricket off-season she worked for Visions OBs – now known as NEP – as a production coordinator, crewing outside broadcasts. Blackmore goes on: “After three years at Sunset+Vine on the cricket they won the BBC Horse Racing contract and I moved over as production coordinator on that for two years. It was an incredible sport to work on and included producing the Epsom Derby, Grand National and Royal Ascot.

After eight years as a production manager at Sky Sports, the production team created new opportunities including three production executive roles. Blackmore was successful in getting one of these roles, all of which were, incidentally, taken by women.

Yet the move was not an easy leap for Blackmore, who was torn between the opportunity and her passion for being on the road. She explains: “Honestly, it was a difficult decision to move from being an on-site production manager into an off-the-road leadership position because I loved the buzz of being in the thick of a live event. However, I could see that it was a fantastic opportunity to apply for a role that had previously not existed within our department.”

She spent the next three years as a production executive overseeing cricket, golf, boxing and sports news, after which she took her current role. She adds that the transition to management took time: “I didn’t think I would get the production executive role when I applied for it. We’ve all probably suffered from imposter syndrome at some point in our careers and there was certainly an element of that when applying for such an important, new position. With the production executive role and now my head of production role, I had to look at everything with a wider perspective. I was no longer immersed in just one sport or event at any one time; I had a whole team of people with varying roles to think about and multiple sports to take into consideration with every decision that was made. That mental switch took time to adapt to.” 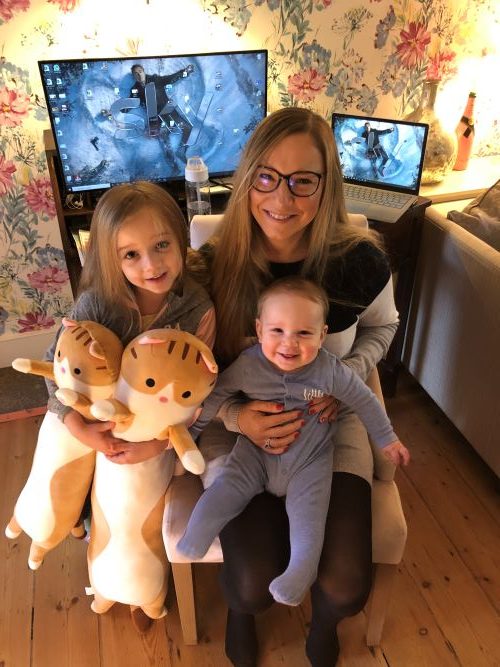 In what she enjoys about her role, Blackmore comments: “It’s the most exciting, challenging, diverse and exhilarating role that I’ve ever worked in. I don’t miss the constant on-the-road aspect because you are still an integral part of those productions by working with your team. You honestly never know what the next day will bring.”

The most challenging thing about working in live sport today at Sky for Blackmore is keeping up with the quantity of it, she says: “The sheer volume of live sport that Sky Sports covers brings daily challenges, and then on top of that there is obviously the current COVID situation, which frequently causes plans to evolve to align with the changing guidelines.

Having said that, we all appreciate that we’re extremely blessed to be able to still do our jobs during this tough period.”

Yet the challenges are not only about work for Blackmore, who says: “I have two children (one being only eight months old,) and a husband with a demanding job, so it’s hard with home schooling, making sure you structure your workload and ensuring you switch off. Balancing work with two children is also hard as many people know. The guilt on both sides is sometimes overwhelming. Have I spent enough quality time with the children, spent too much time replying to emails while I’m with them, or neglected home schooling during the last few months? On the other side you can worry that you’re not being available enough at work because you have to leave the office to pick up the children or jump off a virtual meeting at home because you have to make their tea.

“However, I know that these are my own mental obstacles to overcome. Sky are exceptionally supportive of everyone’s circumstances and provide so many different tools to help employees balance their personal life with their work.” 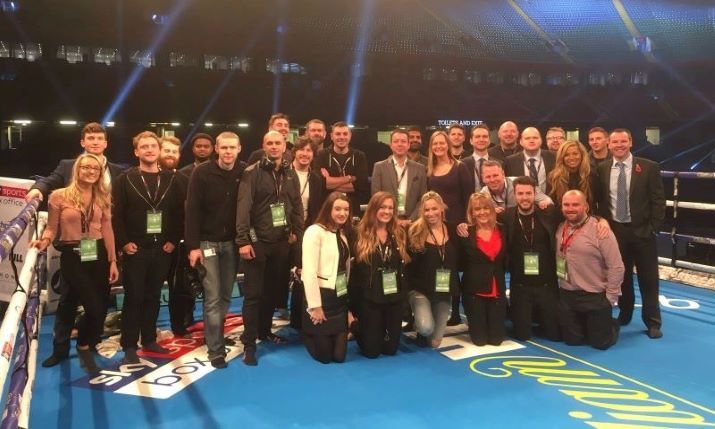 Sky Sports has an ability to just make things work, no matter how challenging, says Blackmore. “As with most broadcasters, we have been working towards remote productions on our different sports over the last few years. The roadmaps that we put together for these take months of planning based on the volumes that we have and involve multiple departments, both internal and external. Once it was confirmed that the Premier League would return post lockdown, that roadmap went out the window and everyone at Sky put everything into turning our Premier League contract into a remote production.

“When things like this happen, Sky are incredible at pulling together to make it work. It’s hard enough to do with a couple of games a week, but our volumes of fixtures are significant, and to deliver day in, day out, has been particularly impressive.”

On the coolest thing Blackmore has worked over the course of her career, she says: “It has to be the Floyd Mayweather versus Conor McGregor boxing event in 2017. It was in Las Vegas in the height of the summer, the media interest was the greatest I’ve ever seen, and the whole atmosphere was electric. That was a huge pay per view event for us.

“On a more personal level, the six week Lions Tour of Australia in 2013 was incredible to be a part of, the Joshua versus Klitschko fight in front of 90,000 people at Wembley was pure theatre, and covering the England football team in Kazakhstan was one of the more challenging and rewarding projects I’ve ever led.”

Finally, for others looking to follow a similar career path, Blackmore says: “If someone wanted to follow the same career path as myself, I would advise that they show passion, determination and integrity. Own their mistakes and when faced with problems don’t dwell on them, just focus on the solutions. I like to think that I have always been myself in every role I’ve held. Honestly, I would give this advice to men and women alike.”