IP distribution for EURO 2016: EBU works with Lawo and Orange 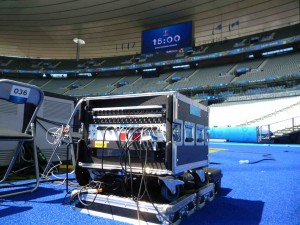 Saint-Denis: At all matches the special cams connected to the stageboxes include the Spidercam and starting with the quarter finals also two Antelope Pico Ultra Slowmotion cams

In what is one of the largest ever IP-centric operations for a sporting event, Lawo IP video equipment is used in three areas for the EURO 2016 championships. For the UEFA venue infrastructure at each stadium, UEFA uses a Lawo solution collecting all mic audio signals and also the video signals of the special cameras via IP infrastructure using stage boxes around the field of play through 120x V__link4 video-over-IP interfaces (12 pro venue); 130 A__mic8 (13 pro venue) which convert analogue audio into IP; and then two Lawo VSM servers at the IBC, 32x virtual VSM panels on touchscreen-PCs and tablets, and 22x Arista 7150S (two per venue, two at IBC).

At all matches the special cams connected to the stageboxes include the Spidercam and starting with the quarter finals also two Antelope Pico Ultra Slowmotion cameras. These are used as InGoal Cameras and each delivers one live and one replay output.

These outputs are delivered to the special cameras control room, which is also where all the audio comes together, and from there it is handed over to the production trucks at the stadium.

The commentary system provided by HBS is also based on a Lawo system (a project first developed for the last World Cup in cooperation with HBS). This is completely IP-based, using Ravenna AES67 as transport method. This involves 500 Lawo LCU Commentary Units (50 per stadium) all networked over IP; 50 Lawo LCC Commentary Control PCs; and 46x Lawo DALLIS modular I/O units for audio breakout (three at each venue, 16 at the IBC).

And last but not least the UEFA/EBU utilises Lawo for their VandA project, which is an IP-based signal contribution from each venue to IBC via fibre connections provided by Orange. There are 264x V__remote4 (19-20 per venue, 73 at IBC); 2x redundant Lawo VSM servers at the IBC; 2x Lawo VSM LBP51 panels at MCR; 12x Lawo VSM softpanels; 2x Arista 7504 (each with four blades), and 26x Cisco SG300 (two at each venue, six at the IBC).

Orange provides direct fibre-based IP connectivity between the stadium and the IBC. Based on the IP-based VSM control system, the operator selects the desired stadium and it’s all routed automatically, switching within seconds to the next stadium.

In workflow terms, this is seen as a big step forward, saving a lot of time and reducing risk as it always the same process – no need to change fibres at venues on match days and worry about issues around damping and line connectivity.