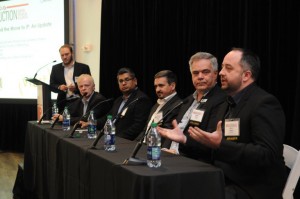 The recent SVG USA IP Production Forum held at NBC Sports Group’s headquarters in Stamford, CT, took a close look at the various IP standards currently in the marketplace as well as the future ‘harmonisation’ around the SMPTE 2110 standard, which promises to bring a new level of flexibility and compatibility to those looking to move beyond baseband for production needs.

“SMPTE 2110 is well down the path, but it is nowhere near the end,” said Mo Goyal, director of production marketing, Evertz. “It will be like when SDI first came out and was published. There were a lot of interoperability issues that needed to be fixed.”

Hugo Gaggioni, CTO, Broadcast and Production Systems Division, Sony, was on hand to discuss the NMI IP standard, which the company developed quickly to meet the demand of customers who could not wait for the politically charged technical-standards process to work itself out.

“We have used NMI for many production trucks and studios, and we are also an active participant in the 2110 standard,” he explained. “While 2110 is not around the corner, we are actively participating. The result will be to satisfy the end user, and, with FPGA-based NMI, we will be able to use a plug-in to become 2110-compatible.”

The goal of going IP, added Goyal, is to give a facility the cost savings, flexibility, and agility needed to respond to changing requirements more quickly than before. Evertz helped quicken the pace of change with ASPEN, an IP format it created and soon shared with other equipment manufacturers so that customers could use IP-based equipment from different manufacturers without compatibility issues. ASPEN is based on MPEG-2 transport and JPEG 2000 lossless compression. Evertz is also committed to AIMS, which will bring a new level of signal flexibility to IP transport.

“One of the challenges is moving video, audio, and metadata as separate entities, and having that flexibility on top of IP makes it a lot more attractive,” Goyal said. “And 2110 is the format everyone can rally behind and use a methodology across multiple vendors.”

“There are so many standards,” he pointed out, “but the efforts of the AIMS Alliance allows us to see the light at the end of the tunnel for a standard so that we won’t have to change our development plans on a constant basis.”

David Tasker, head of product marketing, Snell Advanced Media (SAM), agreed, adding that it also prevents the customer from being driven down a single vendor path. “AIMS will give them the freedom to choose certain technologies. And it’s a collection of not just vendors but networks, broadcasters, truck companies, and consultants.”

Will Waters, director, product marketing and sales enablement, NewTek, detailed his company’s NDI format, which was launched at IBC2015 to bring enhanced workflow to NewTek users and future-proof their investment in NewTek products, such as the Tricaster.

“It is software-based,” he pointed out, “and we have delivered. It has taken off quite significantly with 300-plus developers around the world.”

NewTek also supports ASPEN and is pledged to work with 2110 when it is ratified.

For many, the move to IP is a first step to getting into the business of 4K content creation and distribution. An HD signal, for example, can move over a single 3-Gbps or 1.5-Gbps SDI cable. A 4K signal requires four times as much bandwidth, and the only SDI solution involves splitting the 4K signal over four separate 3-Gbps SDI signals and then recombining them as one image. IP will allow a 4K signal to travel without needing to be split into four. Another option? The use of 12-Gbps SDI cables.

“A massive installation would be crazy to use quad HD-SDI to move 4K,” said Gaggioni. “The use of 12 Gbps could be a solution for some, but the transmission-distance limit means it could work in the confinement of a truck but not in a large facility.”

The plug-and-play nature of 12 Gbps could make it attractive to those who don’t require long cable runs and don’t want to deal with understanding IP networking.

One of the issues facing the entire industry with respect to the move to IP is training. Goyal said the EBU and IABM are looking to teach IP networking to engineers and manufacturers but there is much work to be done: “It is a cultural change and what we need are organisations that can educate, educate, educate.”

Tasker concurred: “We have to find the people that understand how video flows through an IP switch, and it is incumbent on organisations like AIMS, IABM, and the EBU to have tutorials to help.”