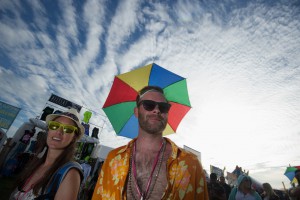 Six OBE C-100 encoders were used at the Glastonbury Festival to transport high quality HD broadcast feeds over IP from six stages to London, marking the first on-site IP delivery at Glastonbury. These feeds were then used on the web and Connected Red Button services. Using BBC Newsgathering’s expertise in using IP and commodity equipment in the field, the C-100 encoders ran as software on existing Intel-based hardware with the feeds transported over an on-site IP connection. Delivering standards-compliant H.264 in a transport stream, the OBE C-100 allows cost-effective, high quality broadcast contribution over IP. It is available in both hardware and software versions.

“BBC Newsgathering have already shown that software based on Open Source running on off-the-shelf hardware can be used on a daily basis,” said Kieran Kunhya, Managing Director of Open Broadcast Systems. “I am pleased that they have proven that a high profile event like Glastonbury can also be encoded and transported over IP using the same concept.”