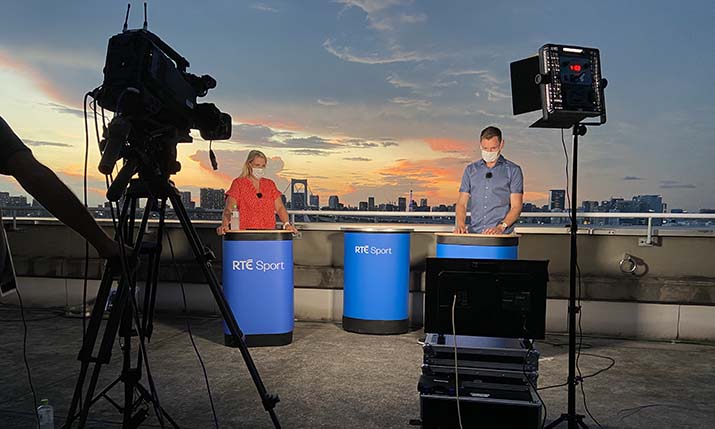 RTÉ’s Jacqui Hurley, presenter, and David Gillick, Olympian and presenter, bringing the news to viewers at home from the roof of the Decks shopping centre in Tokyo

Irish broadcaster, RTÉ has just completed work on the 2020 Tokyo Olympics, producing over 270 hours of Tokyo 2020 coverage on TV channel, RTÉ2, and 408 hours of live coverage across the RTÉ Sport website and the RTE News app, to help celebrate the achievements of the largest Irish Olympic contingent of athletes in the country’s history.

In addition, the Irish broadcaster carried out its first remote production for a live event. “We had a remote presentation position for a live show for the first time ever, for the overnight programme,” says Cliona O’Leary, deputy head of TV sport at RTÉ.

Speaking to SVG Europe from Dublin, she continues: “The workflow to have a remote presentation in Tokyo and control room in Dublin is a big innovation for us,” notes O’Leary. “This was conceived by our execs Mark McKenna [TV producer] and Kevin Corcoran [executive producer], and facilitated by Tom Nugent, RTÉ’s technical lead in Tokyo, and others in RTÉ.

“Our remote production was a first for us and it was very successful,” continues O’Leary. “We sub-let our presentation studio in Tokyo from the BBC and they gave us space, power and fibre connectivity. We also had a two-way with David Gillick, Olympian, who worked as our resident expert across all sports and he was our reporter on the athletics as well.

“When we were covering other sports David was on the roof our open air studio on the roof of Decks shopping centre in Odaiba, Tokyo with Jacqui [Hurley, presenter] or Clare [McNamara, sports journalist], and when the athletics was on, he was in-situ at the Olympic Stadium in our permanent Mixed Zone position there. Tom and the technical team set up a two-way with David so he could converse with Jacqui or Clare live. This was a wired internet connection serviced by OBS.

“Also we had two gold medals – Fintan McCarthy and Paul O’Donovan in rowing and Kellie Harrington in boxing – so when they were in action, we had live SMUs in their homes in Ireland and we could bring those pictures to the IBC where they could speak to our presenters on the roof into the live programme.” 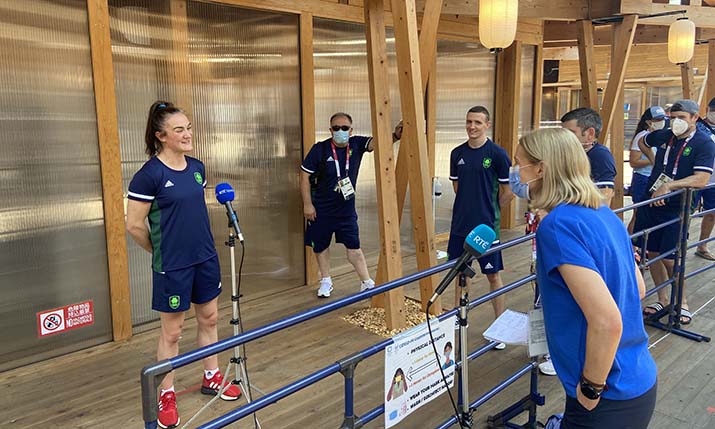 Nugent set up the remote studio for live presentation from the roof of Decks, which had to be set up fresh every day due to the changeable weather in Tokyo. O’Leary continues. “We put in the camera, audio and set design. The weather was the most challenging aspect of this; it was exposed on the roof to high winds, rain and extreme heat and sunshine. Every day our team had to de-rig and re-rig. We had a pop up tent [3m x 3m] to protect our presenter during programme time. But on three occasions the weather wasn’t great, so Paula [Fahy, RTÉ Sport resource and commissions manager] and Tom moved the presentation position into our office in the IBC.

“John Freeney was our cameraperson in the Decks presentation position, which had a backdrop of the Rainbow Bridge. This was our position for our live, Tokyo 2020: Through the Night, programme.”

She continues: “Our camera team were Mark Ronahan, Cormac Duffy, Neilus Dennehy, Padraig Treacy, and Ken Fogarty. They used LiveU to bring interviews back in HD. The frame rate is different in Japan to Europe; it’s 59 versus 50. We filmed and set back our interviews in our 50 frame rate.” 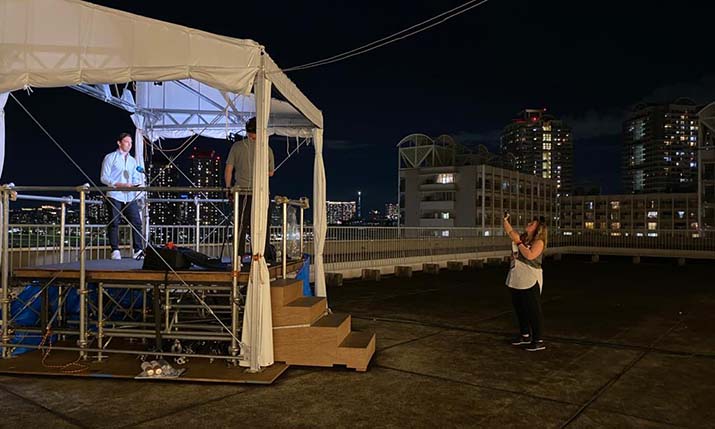 Protecting presenters and athletes alike was this little marquee, loaned to RTE by friends from BBC Sport

This year, much like BBC Sport, RTÉ has been more limited in what it can show due to Discovery’s rights deal with the International Olympic Committee (IOC). O’Leary comments: “We bought linear rights to the Olympics through Discovery. We are taking all of the feeds from OBS through the multi offering and we have DX feeds coming into our office in the IBC in Tokyo, which we switch to on occasion over there when we have an Irish athlete competing that is not on the multis.”

O’Leary goes on: “In the past we had far more extensive rights than we have currently, so we’ve no digital rights this year. That has made it challenging because we’ve got the biggest Irish [athlete] team ever; we had 119 athletes across, I think, 19 sports and to try and cover all of that with clashes [between events running simultaneously], has been difficult. But to be fair to Discovery they did give us an allowance which allows us to go for 10 hours on Player when there was a clash, so we could get to show the Irish in action live on our digital channel when we were on linear, because you can only go on one linear channel with coverage.”

However, she adds: “We’re probably not bringing as much basketball and soccer to the audience that they would have been used to with the amount of coverage that we would have had in the past [because of the new rights deal]. However, our linear coverage hasn’t reduced; our linear coverage is up from 220 to 270 hours. So it’s more just our digital coverage that has been massively impacted, but [conversely] we wouldn’t have had the audience for digital as much really, so it’s not impacting, and we’re not getting the criticism that the BBC has gotten, but it is challenging to try and cover all of the Irish action live.” 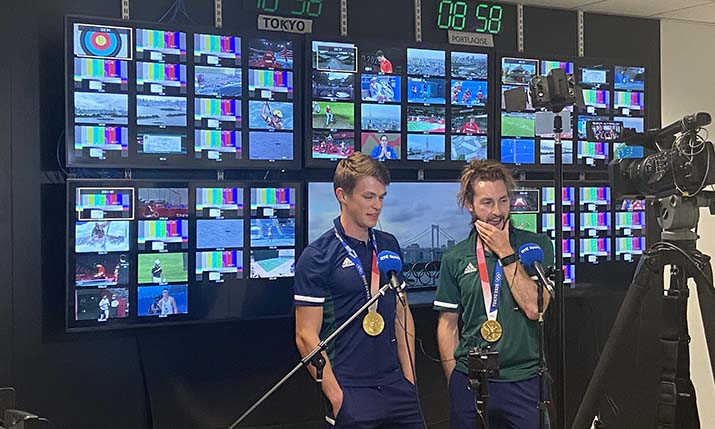 Gold medal winners for Ireland, Men’s Lightweight Double Sculls Rowing with Paul O’Donovan and Fintan McCarthy, at the IBC in Tokyo with RTÉ

RTÉ Online provided 24 hour a day coverage over the course of the Games. The results and reactions from all the Irish athletes on each day were published as they happened, while live blogs were published on all the action from the Games through the night. There were athlete profiles, exclusive video interviews and analysis from RTÉ’s team of pundits, as well as the breaking news from Japan, RTÉ.ie/sport and the RTÉ News app.

Continues O’Leary: “RTÉ2 was our channel for our coverage, and it was simulcast on RTÉ Player. We started each day from just before or after midnight, with Jacqui Hurley or Clare McNamara presenting Tokyo 2020: Through The Night programme, live from Tokyo overlooking the Rainbow Bridge. From 9am each day, Peter Collins presented coverage from the day’s live action during the Tokyo 2020: Daytime programme. From 7pm, Darragh Maloney then took over to present the key highlights programme following the day’s live action on Tokyo 2020: Today at the Games.”

RTÉ Radio 1 had updates and reports throughout the day starting on Morning Ireland, providing a comprehensive catch up on all the events from overnight, as well as the live event action reporting in real time from Tokyo. The RTÉ team reported into various programmes throughout the day on radio for all medal events and Irish in action. Additionally, its weekday radio sports programme, Game On, wraps up the day’s news, reports and action from the Games. 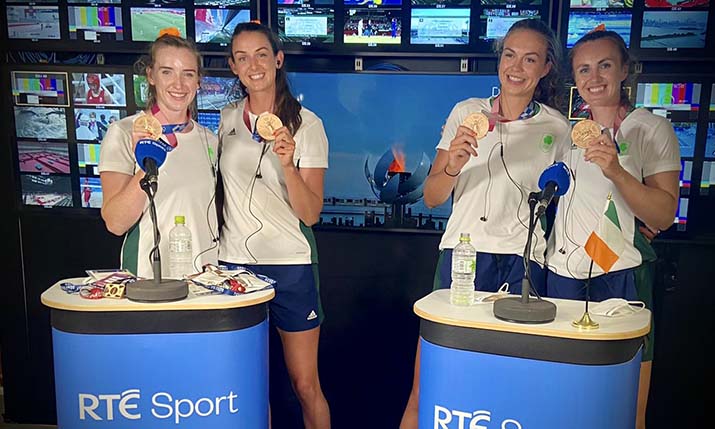 O’Leary comments on how RTÉ’s crew in Tokyo was affected by the pandemic. “Our team on the ground was reduced significantly because of COVID,” continues O’Leary, “but we managed to bring back interviews with all of our Irish athletes and our friends in the BBC helped us to achieve that. We are very grateful to our colleagues in the BBC who are always so helpful to us, particularly Jonny Bramley and Ron Chakraborty.”

Says O’Leary on the crew running the production: “We had a team of 29 people in Tokyo rather than 60, which we would have normally sent, led by Paula [Fahy]. Within that, we had six camera people who were covering interviews from our 116 Irish athletes across 19 sports. It was the largest Irish team of competitors [ever in our history].”

RTÉ had a COVID liaison officer in Tokyo, Sean O’Briain, who, says O’Leary, “had a really challenging job”. She comments: “On top of his production workload, he had to coordinate the team with their daily saliva tests and upload all of the information. It was very restrictive initially for people when they couldn’t use the public transport system, but it eased after the first 14 days. However it was a very different Olympic experience for the team there.

“In Dublin, we set up a separate office for the team and ensured all of the computers were two metres from each other. Also one side of the office had garage style doors so they could remain open for the most part. We had to adapt our off-tube commentary positions, and our studio rostrum to ensure social distancing for our broadcasters as well. We did more off tube commentaries from Dublin than ever before due to COVID.”

Adds O’Leary: “Our coverage on RTÉ 2 was in English, but we did have an Irish language presenter in Tokyo, Gearoidin Nic an Iomaire, who did commentary, interviews and reports ‘as gaeilge’ for RNaG, our Irish language radio station. A lot of the time our Irish athletes are not leading finals, and so to keep the viewer informed we had Irish commentators in English commentating on the majority of our Irish athletes. Most of these commentaries were done from Dublin except for our swimming, diving, and some of our athletics and rugby.” 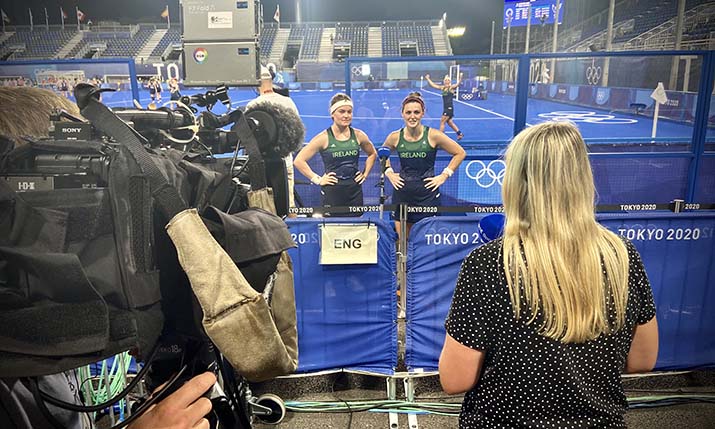 Jacqui Hurley, presenter for RTE, hard at work in Japan

The small crew in Tokyo meant the broadcaster had to keep the production team for its overnight programme in Dublin. “So our control room for that through the night programme was based in Dublin. The rigging which Tom [Nugent] and the team did with the BBC enabled our presenters in Tokyo to see our RTÉ 2 live output, and enabled them to be cued by our directors, Jamil Abubakar and Tom Kearns in Dublin,” says O’Leary.

“Tom, with technical team of Tom Norton, Ciaran Cullen and Darren Keogh, also set up a remote interview position in the athletes’ village for the first time. We had a LiveU fixed in there which offered a permanent link. We used that three to four times with athletes interviewed by our presenter in Dublin.”

For all other content RTÉ hired a fibre link which enabled it to send two live feeds from the IBC to Dublin as outgoing circuits. Adds O’Leary: “We had return vision and audio to Tokyo with our Olympics output. The talkback for our presenter also came on that circuit and we also had some off tube commentaries and commentaries from the venues in Tokyo which went back on the fibre. We could also connect to RTÉ’s phone system and the RTÉ intranet so our Tokyo office was connected to RTÉ systems.”

In its Dublin-based studio, RTÉ used augmented reality (AR) with stats and pictures on the floor to enhance coverage for viewers.

On the challenges the broadcaster faced in producing the Games, O’Leary comments: “We nearly got caught a few times with the multis going late to events featuring Irish competitors, but thankfully having the office in Tokyo where Paula and team were monitoring, and with Sinead Hernon and team monitoring and coordinating feeds at this end [in Dublin], we switched feeds from the multi to a DX which was available in the IBC, so the audience didn’t miss out. That is the value of having a fully kitted out office in the IBC.”