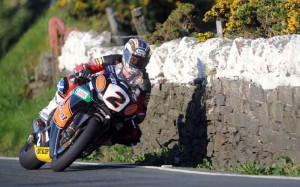 The NAC Hi-Motion II is capturing racing action at the Isle of Man TT motorcycle races at up to 1000 frames per second.

The 2012 Isle of Man TT motorcycle races ended their first week, with more action to come, all covered in high definition using a mixture of commercial and custom-made cameras recording on to solid state media. New for this year are a NAC Hi-Motion II ultra slow motion camera and a mini-jib to get close to refuelling in the pits. Coverage is produced by North One Television, with facilities provided by SIS LIVE. All footage is recorded and edited on a tight turnaround into daily highlights programmes.

Cameras of various types are portioned along the road course, which passes through towns and villages as well as the mountainous central part of the Isle of Man. The majority of each race is captured by stage-cams located at strategic points, including some mounted on kerbs.

Recordings are made on NANO solid state units, which are triggered remotely using SMS text messages.
Material from the stage cameras is collected once racing is completed for the day and, along with recordings from on-bike units and following helicopters, is loaded into the post-production system for editing. Three mobile units house four Final Cut Pro edit suites, production office, ingest workstations, a play-out suite and special camera workshop. Alongside these is SIS LIVE’s X-trailer, which contains the Final Cut Pro server.
The Hi-Motion II records 1000 frames a second, compared to the 600 of its predecessor, which was featured on the TT in the past. It is being used at different points on the course to show both the extent to which the bikes flex at high speeds and how the riders work to control them.
North One’s head of production, Robert Gough, says the Hi-Motion II is kept in record mode even when footage is laid off to EVS. “This means we have a much greater choice of footage and a much better chance of getting critical shots,” he explains. Also new is a mini-jib mounted HD camera, designed by SIS LIVE’s special cameras department, which is used for shots of race starts and refuelling.
Material is edited into a one-hour programme for international distribution, with takers including Network Ten in Australia and Spain’s Antenna 3. UK broadcaster ITV4 takes a specially prepared version, while newcomers to the list of outlets include Sky New Zealand, Al Jazeera and TV Asahi, which marks the first time specific programmes on the TT have been shown in Japan.
As for coming years Gough says North One is looking into technology for online services as well as additional analysis tools.