The Italian Archery Federation, or the Federazione Italiana di Tiro con L’Arco (FITArco), has been filming its competitions and matches for some time now, but recently upgraded its capabilities with URSA Broadcast cameras from Blackmagic Design. 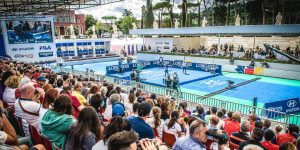 With a recent investment in the URSA Broadcast camera chains, FITArco has seen its archery coverage taken by mainstream broadcasters such as Eurosport and Rai Sport.

“The image quality, at that price point, to me is second to none,” commented FITArco’s events manager Ardingo Scarzella. “It’s that, combined with our detailed knowledge of the sport, that translates into the perfect package for television.”

Archery matches are fast – about 15 minutes for a final – which are divided into shots, 20 seconds per archer for an arrow, three times alternating. Spent arrows must also be retrieved from the targets, so the game regularly pauses for a couple of minutes at a time.

Scarzella commented on those pauses: “Graphics, pre-recorded content and slow motion replays are fundamental for us to fill the dead times. 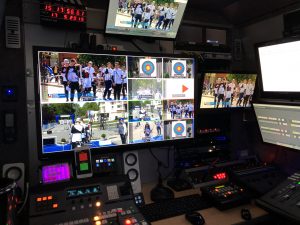 With a recent investment in Blackmagic’s URSA Broadcast camera chains, the Italian Archery Federation has seen its archery coverage taken by mainstream broadcasters such as Eurosport and Rai Sport

“For replays, we use VMix, which transmits to a Blackmagic Mini Monitor and Mini Recorder, while slow motion is controlled using a JLCooper SlomoMini USB. For graphics such as scores, times and statistics, we use a Caspar system with fill and key output through an UltraStudio I/O box,” noted Scarzella.

On optimising the workflow, Scarzella said: “Very often we only have one person inside the OB van; there is space for three, and we do try to fill them, but it happens. This led us to provide this person, the live director, with a series of tools to control each function.”

That includes a small tablet that allows the director to manage the ATEM macros, and an Elgato Streamdeck to control graphics overlays, while an x-keys keypad allows the user to start and end broadcasting and recording from the onboard Mac Pro.

Speaking of its journey with video, Scarzella commented: “Our first experiments date back to about ten years ago. We started small with just a couple of cameras and a Roland analogue mixer. Then in 2013, everything was stolen.”

He continued: “It was frustrating, but we took it as an opportunity to venture into digital with our first ATEM Television Studio. Since then we have continued to expand our offering and in 2015 invested in a van built around an ATEM 1 M/E switcher and Smart Videohub matrix.”

In addition to producing big screen content at various venues and live streaming matches to its online platform, Scarzella said from the mid-2000s the Federation was increasingly being asked to provide dubs for television broadcasting.

“It was natural to continue using a brand we already knew and trusted to cater for this. Plus, as broadcasters’ expectations on quality increased, we were not only able to keep up; we were able to exceed those benchmarks.”

He went on: “Our entire team is made up of people who have known this sport for over thirty years, who hold and have held every single production and management role, from competition manager to presentation speaker, field marshall, and IT manager. You name it we’ve done it.”

This knowledge allows the FITArco production team to play an active role in every phase of the events, meaning they can directly move things in the competition fields to recognise the best use of the space. They also have direct control over any timings, which, according to Scarzella, often results in more coordinated and compelling productions.