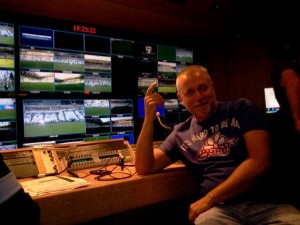 With his company Tau Media, he has worked on a number of landmark projects, including broadcast infrastructure at Turin’s Juventus Stadium, which was opened in 2011. “In five years of operation, no upgrade has been necessary at the Juventus Stadium. Our project design was managed with architects to harmonise the structural part. The result was complete wiring in fiber and triax copper to enable shooting in SD, HD and even 4K. In fact, anywhere in the stadium there is the chance to leverage the existing wiring, whilst remote production is based on the IP protocol and fast Ethernet networks.”

The Juventus Stadium installation indicates what is now rapidly becoming a standard structure for new stadiums, whereby equipment is located in one place while system management is undertaken hundreds of metres – or even thousands of kilometres! – away.

“There are already many examples, such as the NBA Replay Center in New Jersey. All the images from the various playing fields come to the control centre and [so] referees can determine whether there has been an irregularity or not. Then they refer that image to the relevant stadium to certify the presence of that irregularity. Everything is managed through Ethernet networks.”

This production scheme could be repeated in other situations as well – for example a broadcast centre dedicated only to replay.

“Assume 10 replay machines are used at three different times in the same day,” says Bonnici. “Instead of binding up to 10 operators who must be physically present in the different venues, we can now [coordinate a smaller number of operators] in a single replay centre placed in a strategic location. From there it is possible to control easily the various equipment that is used in different stadiums. Hence the efficiency of any system is multiplied.

“Already today some ‘light’ remote production tests have been made and one of these was for the Italian Lega Pro, which installed two cameras on each field connected to a production centre via Ka-Sat. From this one location the director is able to switch between shots as required and construct the story they want to tell.

“Physically only the cameras and operators need to be on the field. Everything else – graphics, insets, replays, etc – can be added in a remote production centre.”

Bonnici continues: “It is no coincidence that a camera operator needs to be on the field since his or her eye off the viewfinder can see much more than what the director sees on a monitor in the control room. The camera operator may suggest images on occasion during crucial situations.

“The main trend is not so much to reduce staff but to improve the efficiency of a broadcast system. The technology will reduce the number of people in the field but they can never be replaced altogether.”