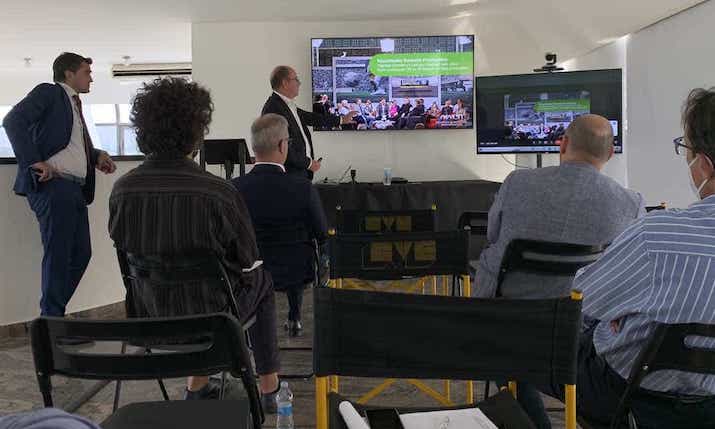 Luca Catalano, CVE CEO, was joined by representatives from Sony, Nevion and Tag, to discuss the transition to remote production in Italy and the tools and workflows available to enable it.

Italy is slowly aligning itself

In Italy, as in many other countries, there has been much discussion about remote production for some years, however there remain many production structures that have not yet added remote production procedures to their traditional set ups.

This is despite the strong push generated by the pandemic and the work of pioneers in the media production landscape, such as EMG Italy.

Catalano said: “This sometimes instantaneous and sometimes incremental evolution underscores the importance of making the right decisions every step of the way to prevent problems from developing later. Choosing the right partner for each project is therefore of fundamental importance.”

CVE’s thinking coincides with that of Sony and Nevion, which believes that technology has transformed the logistics and economy of production and allows for the distribution of production control, content storage and processing at will – over distant geographic areas.

IP, IT and cloud technologies are revolutionising television production workflows, as they have already done with near-live and file production. This allows us to embrace different production models to best meet the various business needs in the medium and long term but also in the short-term, adapting to the technical constraints that will be overcome in the future.

Hot topics around which the discussion focused were how to define the ecosystem, how to outline its dimensions and how to predict its evolution.

Oscar Garcia, senior solution architect, Nevion, spoke about the way Sony and Nevion are thinking of remote production. Remote production, or distance distributed production, can be approached with different points of view and his presentation offered many elements of technical insight. Among these, he proposed next generation JPEG XS compression techniques for external production and contribution.

Sony’s implementation of the low-latency HEVC for 5G was on show at NAB 2022, where low latency and low bitrate became key to transporting 8 to 16 HD cameras over a contribution network.

Sony and Nevion, an ecosystem

In addition to several real and practical application models from which to draw inspiration, Garcia also highlighted Sony’s experience as a reference in broadcast production solutions and how this integrates with Nevion, which specialises in real time IP networks for media and virtualisation.

There are many factors that influence the choice of production model, in a truly changed landscape. The content has changed, the image quality is higher than in the past, there are new expressive possibilities and new experiences for viewers.

Remote production allows the horizon to expand, offering great agility and a pay per use model.

The business imperatives are: a medium and long-term strategy; the search for new business paths; and how to ensure continuity in services and make the right choice of partners and suppliers.

The solutions proposed by Sony and Nevion consisted of functional building blocks that cover everything from acquisition to media management, storage, processing and then publication with media transport on streaming channels, providing for adaptation to IP, compression video, security and all-IP networking on any type of network.

The workflow today must be fast, it must know how to manage the growing quantity of volume contents and allow for the optimisation of human and technical resources, said Garcia.

The technical considerations, which were discussed in detail, include the latency of the signals, the available bandwidth, processing capacity, reliability and security.

According to Sony, remote production consists of three steps: the acquisition, in its wired and 5G forms; a central segment involving cloud services; and live production distributed and with an adjacency to be balanced between processing in the cloud and, in part, locally.

Sony and Nevion’s vision is to have a manageable production journey anywhere and at any scale based on IP and the cloud that makes solutions and services possible.

Video IPath is Nevion’s solution that makes this possible, orchestrating all production video and controlling the functionality of distribution networks.

IP technology has made it possible to share production resources across different locations, studios, control rooms, data centres, broadcast and processing equipment. And, more importantly, it can do the same with staff, presenters and production specialists. 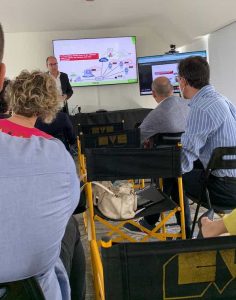 The general belief that Sony and Nevion underline is that this concept makes everything more effective and efficient. The sharing of resources becomes plausible because of the ubiquity of IP and the file-based typology that is possible in LAN, WAN, 4G, 5G and the internet. This enables the geographical fragmentation of the three main aspects of production, namely the acquisition of video and audio, storage and content processing with graphics, logos, play and recording and, last but not least, control by the production staff.

The almost total disappearance of latency makes these procedures perfect even in live on air.

Catalano underlined: “What has just been said involves a rethinking of future business structures. The possibility of physically and geographically separating the production and distribution phases makes it possible in the different scenarios that Sony and Nevion technologies implement. Generally we can talk about five models and types: on location; remote controlled; centralised; distributed; cloud.”

One of the examples quoted by Sony and Nevion was the “dynamic affinity using private clouds” production model as seen at Warner Bros. Discovery (Europe).

The IP multimedia network solution for production has radically transformed the broadcaster’s workflows. The infrastructure involves two private clouds (in the UK and the Netherlands) that provide storage and processing capabilities for its regional facilities across Europe.

The highly scalable system allows any control room in the various countries to use any resource in one of the clouds, with use and capacity managed automatically. Nevion calls this concept ‘dynamic affinity’.

It is evident that such operational versatility brings with it an absolute freedom to plan a production scheme distributed over several locations, some fixed and others mobile, where a monolithic production scheme is no longer used but the most suitable model can be chosen for the circumstances, which can be exploited when needed. This is truly distributed production.

One example Nevion gave was of coverage of a sporting event in a stadium that could involve centralised remote production, with live signals transported to central facilities over a WAN, combined with cloud production for recording and playback feeds.

“In practice, we are convinced that there will be no universal production model. The television and media production sector, despite there being some current static, will have to develop a distributed production infrastructure over time”

Catalano concluded: “In practice, we are convinced that there will be no universal production model. The television and media production sector, despite there being some current static, will have to develop a distributed production infrastructure over time. This will allow you to use any combination of the models indicated by Sony and Nevion, according to your dynamic needs.

“At CVE, Communication Video Engineering, we are experts you can trust to transform any television production from static on location to distributed and smart. We can provide the best products in the category, starting with Sony and Nevion who have unique skills and experience, based on delivering hundreds of IP projects around the world.

“Of course, moving from traditional monolithic production to a fully distributed super flexible one, with far too many options available, will be gradual and incremental over time and also requires a certain degree of mental adaptation.

“However, we are convinced that it is essential to think – right from the start – of the broader context of the distributed environment of tomorrow and make decisions in this direction whenever we put our hand – today – to every single IP project. Such decisions could make the task of ‘federating’, as Sony and Nevion say, all production capacities rather difficult and expensive when the time comes.”