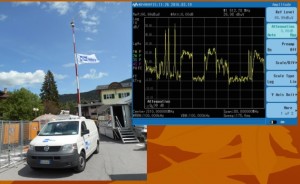 Rai Way is the independent subsidiary of Italian public broadcaster RAI and its responsibilities include the coordination of frequencies during important events, particularly those where a large number of wireless systems is involved. Wireless systems, communication technology, radio cameras, in-ear monitors and more are all integral to Rai Way’s work.

During the most recent Giro d’Italia – which drew to a conclusion in Turin on May 29 – Rai Way had to coordinate about 250 frequencies used by RAI and all other Italian and foreign broadcasters attending the event. Incorporated into the production were 50-plus microphones, 14 radio cameras, 9 connecting radio links and 55 communication systems, with an infrastructure that included five motorcyles, four helicopters and a plane. A shooting studio was set-up at each arrivals point, and in addition to primary coverage this was used by reporters from local radio and TV stations for interviews at the end of each stage.

Dino Larry Tedesco is quality control manager, grand events at Rai Way, and describes some of the processes behind the Giro d’Italia production. “The coordination activity that involves the collaboration of colleagues of ‘Controllo Qualità’ of Rai Way [the branch has affiliated offices in every Italian region] begins a few months earlier with the preparation of the frequency plan to be used during each stages of the Giro,” says Tedesco.

In conjunction with RCS (the company that organises the Giro d’Italia) and the Ministry of Economic Development, Rai Way collects all requests regarding the use of radio frequencies, including RAI’s, determines the compatibility between requests, and produces a frequency plan.

“In some special cases we perform inspections equipped with dedicated vehicles, spectrum analyzers and receivers at each finishing line to perform the analysis on the frequency bands in situ,” says Tedesco.

This year the Giro d’Italia had some stages outside the country boundaries so it was necessary to double the number of temporary licence requests to the relevant foreign ministries. Ultimately, the frequency plan takes shape by factoring in all those participating in an event, avoiding the use of occupied frequencies or those that potentially result in intermodulation phenomena. 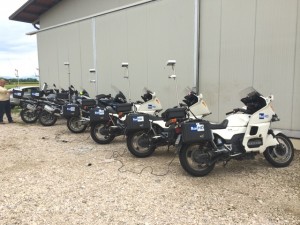 A few days before the start of the first stage, RAI – the host broadcaster in charge of production for the international TV circuit and national customisation – begins the installation of wireless systems at the first arrivals point. Out in the field, Rai Way starts providing advice on the positioning of the transmitting and receiving antennas. RF filters and combiners are distributed to optimise the arrival systems, while Rai Way also monitors the use of shared frequencies and provides alternatives in the event of interference.

Another crucial task performed by Rai Way is to facilitate the relationship with the MISE (Ministry of Economic Development) on behalf of foreign broadcasters and their RF requirements.

On the day of each stage, the Quality Control Rai Way staff – who have a fully-equipped vehicle and a telescopic extendable pole up to 10 meters – check the frequencies allocated and look for the presence of interference. In the event of problems, the staff of Rai Way Quality Control intervene by providing alternative frequencies to restore the service quickly and immediately after identifying the source of the interference.

Some wireless system manufacturers are also involved in order to help identify more powerful RF solutions and/or undertake assessments of how their systems perform in specific circumstances. Meanwhile, a continuous updating of the RF plan allows the optimum use of frequencies by broadcasters, without resulting in interference or noise to other telecommunications services.

Rai Way also offers these services to other events that have need for coordination of frequencies, with recent examples including the Moto GP Grand Prix at Mugello, in Tuscany, for which the Spanish company Dorna holds the TV rights.