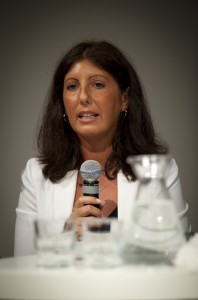 “The first live broadcast at the same time in the UK, Germany and Italy dates back to October 2010 and the Ryder Cup. Tests and trials on 3D transmissions continued in the following months with other sports events as well as films, until September 2011 where the market seemed [sufficiently] mature to experience full 3D programming.”

So says Cosetta Lagani, head of the only Italian 3D channel, Sky 3D, which is part of SKY Italy. Sky 3D was born out of cooperation with Samsung Smart TV.

After extensive trials, the editorial comprises a variety of different elements: sports, entertainment, films, children’s programming, and natural history documentaries. In particular, the trial involved many football events and other sports; the first 3D production in football was Napoli-Bayern in October 2011, an European 3D Oscar-winning television production in the Best Sports Productions category.

Cosetta Lagani recalls: “At that time the ideal conditions for 3D filming were due to a complete synergy with our colleagues at Sky 3D UK.”  The result of that experience was a deal for Sky 3D with the Italian Football League to produce 3D football matches in Serie A in 2011, such as Juventus-Rome, and from there on with various golf, rugby and tennis tournaments, as well as 16 days entirely dedicated to the 2012 Olympic Games.

“My opinion is that the three-dimensional shooting is even more spectacular when it involves close-up and mid-field images in [sports such as] diving, golf and tennis, [but] less in football where it is always difficult to find the right balance between being able to harmonise the effect of stereo 3D with the need to return a dynamic team vision. The 3D effect should not distract from the complete vision of the game as a whole,” says Lagani.

To this end, Sky 3D has agreed and shared a “technical 3D” standard with Sky UK, Sky Germany and other broadcasters that involves precise 3D-stereoscopic parameters. This set of rules is to be respected by the whole production chain and final contents. All the parameters of each frame of each production must always be within a precise ‘window’ in order to avoid side effects for the viewer, such as headache or loss of balance, nausea, disorientation, etc.

In practice, any stereoscopic 3D material purchased or made by SKY 3D is immediately controlled by dedicated Sony equipment which processes and submits it to the stereoscopic parameters agreed. Only if the outcome of the full product verification exceeds 100% can it then be broadcast.

One of the technological partners of the channel is Rome-based DBW Communication, which is able to check for any material from SKY 3D before it is aired.

At present, the three primary types of editorial content are football, movies and documentaries. On the basis of these considerations, the channel has partially thinned its commitment to other sports, focusing only on the big events such as Formula 1. For football, it maintains a high concentration of events in Serie A, Champions League, Premier League etc.

Recent fixtures include Napoli-Juventus on March 1 at the same stadium used for the first event in 3D. This match will be followed by the Inter-Juventus Derby on March 30. The production is, as always, by Infront and the service provider is Roman SBP in tandem with DBW Communication.

3D and HD productions are parallel shot with seven camera points, for a total of 14 cameras for each pitch. Many images are shot in the pre-match period according to the editorial approach of Sky Sports with the input of dedicated journalistic talent.