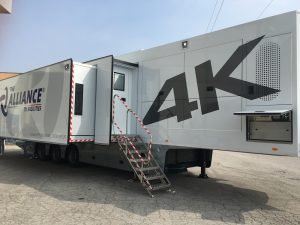 With an active fleet of eight OB vehicles, four transportable flight-case systems and several configurable mobile video wireless systems, The Alliance describes itself as “a solid and state-of-the-art group [that has united] three prestigious brands in the industry of European television production.” The result has been “a new and unique reality for television production” commanding extensive experience and expertise.

Founded in 2016, The Alliance has gathered in one hub three of the largest Italian broadcast production companies – Global Production, One TV and SBP – with locations in Milan, Rome, Padua and Turin. Behind this Alliance, Professional Show is the operating technology branch and systems integrator which made it possible to create a new mobile vehicle, unitONE, that exemplifies the concepts on which The Alliance is based: namely the decisive technological orientation and fusion of top-level broadcasting skills and resources.

Leonardo Garardi of Professional Show confirms: “This mobile vehicle underscores our will to become even more central in top quality television production at a European level. In fact we act as a hub; our job is to try to develop the market and this truck is the ideal tool.”

On 3-4 October, the new unitONE unit was officially presented at Professional Show’s main headquarters in Limena, near Padua.

Andrea Gianolli, CTO of The Alliance, explains of the new vehicle: “unitONE is a 14-metre truck, set up to handle up to 30 cameras. It is a joint project with Professional Show coordinated by me as CTO. Based on four expansions, it offers a 72 square foot walkable area, based on a Tomassini Style bodywork, and a clever mix of design, engineering, material choices, equipment, electrical system, monitoring and infrastructure assembly, all built ‘in house’.”

It is a truck that when it reaches its destination opens two below expansions on the left and two on the right side. It is an ambitious project that took almost a year to complete, starting from scratch.

Subsequent to completion, unitONE is now operating at Ciak Theater in Milan until the end of the year to help cover The X-Factor TV programme. From 2018 onwards, it will be used in Moto GP coverage and on the European Grand Prix for Dorna as a host broadcaster, with other deployments to be determined in the near-future.

In the coming weeks, the team will decide upon the purchase of 4K full HDR cameras, which is currently being negotiated between two leading vendors. The super slow-mo section is also in the process of being defined.

Among other factors, the new truck stands out for the presence of a double video gallery and a double physically separate audio main control room with independent staff way-ins and doors. This allows the creation of two different feeds at the same time for two production crews. The broadcaster can bring this single vehicle to the event venue and achieve, for example, a host feed and customisation at the same time.

The onboard technology features are obviously high-end and the audio section is no exception, featuring a 5.1 built-in listening system. Video monitors are Samsung high performance, high brightness and contrast displays; the 256-channel Intercom system is Omneon RTS, with 50 panels; Evertz provides glue, master sync and clock; and Lawo supplies its VSM control system. 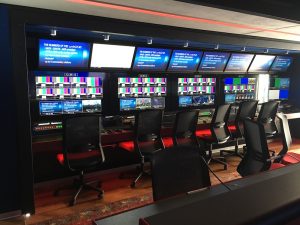 Inside unitONE, which will cover MotoGP and other sports events in 2018 after its current run on the Italian version of The X-Factor.

It took two thousand design hours and three months of realisation, setup and testing to complete the new vehicle. There are many notable construction details on unitONE, including the specification of internal batteries that can power the output for 20 minutes in the event of a mains failure.

The 30 years of experience of those who built this unit have resulted in the specification of two isolation transformers, full redundancy, two crosspoint external areas, and separate sections for the triax for fiber.

Even the selection of indoor lights involved the installation of a home automation system that makes it possible to create different lighting states and settings for various applications.

Alongside Andrea Gianolli, Alessandro Scattolin worked on the technical coordination, while the design of the audio part was Stefano Gianolli. Fabio Veggiato served as commercial coordinator for equipment acquisition.

unitONE is an innovative tool that can accommodate 32 workplaces with ample operational space. It arguably represents a new standard of OB truck and The Alliance has already put into production two further vehicles that will be ready and put on the market in 2018. These will feature the same basic infrastructure as unitONE, but with different customisations in certain sections.

At the moment, without cameras and slow-motion equipment (which will be defined before the end of the year), the value of the first vehicle is around 3.5 million euros and is expected to reach a final value of over six million euros.

All IT resources on unitONE are shared by all onboard personnel thanks to a series of Gigabit V-LANs. A total of 32 workstations are onboard: nine are for RVM and slow motion, alongside five production sites, while the main control area houses the Grass Valley Cayenne mixer with 192 inputs and 92 outputs.

The video section is wired in 3G baseband at the moment, while the audio section is already configured and operative in IP with Stagetec mixer and Omneon RTX intercom on IP and Dante protocol. The multiviewer IP system is the brand new Evertz 3407 based on 9 cards, each equipped with 4 outputs and 36 inputs.

The central matrix is an Evertz EQX 276×276; next to the main control area in a separate room is the tech room and the CCU section with Textronix 4K test equipment.

Also situated onboard are about 50 Samsung monitors of different sizes (49”, 55”, 32”), about fifty 16- or 32-button intercom panels, and desktop panels used in some of the typical outdoor productions in stadiums. All the electronics are contained in only five racks, while there has been a focus on enabling ease of reconfiguration as required.

Optimising the electrical system involves servo-assisted and non-manual switches, while 180 batteries would keep the unit operative for about 20 minutes in the event of mains power problems.