ITN Productions’ Sport division has been commissioned by the International Champions Cup (ICC) to provide live commentary for international broadcasters during the tournament. ITN Productions is supplying broadcasters across Asia-Pacific, Europe, the Americas, Sub Saharan Africa and MENA. These include BeinSport, ESPN, CCTV, MUTV, DAZN, MediaCorp, MTG and Fox Sports. 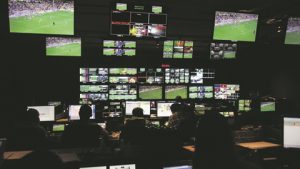 ITN Productions’ Sport team benefits from the state-of-the-art infrastructure of ITN which enables raw live footage to be digitally fed from Arqiva into ITN’s master control room. Pundits and commentators in ITN provide live commentary that’s mixed on top of the footage and sent back via to Arqiva for international clients to access live for their own networks.

Tim Godfrey, partnership director at ITN Productions, told SVG Europe there are challenges in providing this remote commentary: “Clearly there are challenges in operating remotely when commentators are not on-site as the match is being played. However, the ITN Productions team is experienced in dealing with live feeds and producing events remotely. ITN Productions currently films, produces and remote edits all the games in the English Football League. We have chosen commentators and producers with this experience to deal with the demanding environment and there are an experienced team of seasoned football producers across this production.”

He continued: “In being able to remotely commentate on events like this, and given how these feeds only come up a short time before the event, at ITN, our teams are uniquely placed to be able to deal with a variety of technical issues as soon as they become apparent.”

Arqiva has a contract with Asia-based Catalyst Media, a sports marketing business, for the global distribution and streaming of all the ICC and non-ICC matches. In terms of the provision of English commentary, Catalyst has contracted directly with both ITN and Setanta for this service provision. Arqiva’s involvement is to deliver the content to BT Tower for Setanta or ITN to add the commentary, and then send back to BT Tower for Arqiva to access to then distribute globally.

Commentators include John Anderson who has more than 30 years’ experience in TV and radio as a sports commentator and reporter, specialising in football and athletics, as well as Joe Speight, who has worked for ITV, ESPN, Setanta, Sky, BBC, and Mark Scott, whose work includes Match of the Day, BT, ITV and Bundesliga.

Godfrey concluded: “We look forward to providing remote live commentary services for the International Champions Cup across the most exciting pre-season matches. The commentary will be informative, engaging and provided by a roster of high-profile talent.”