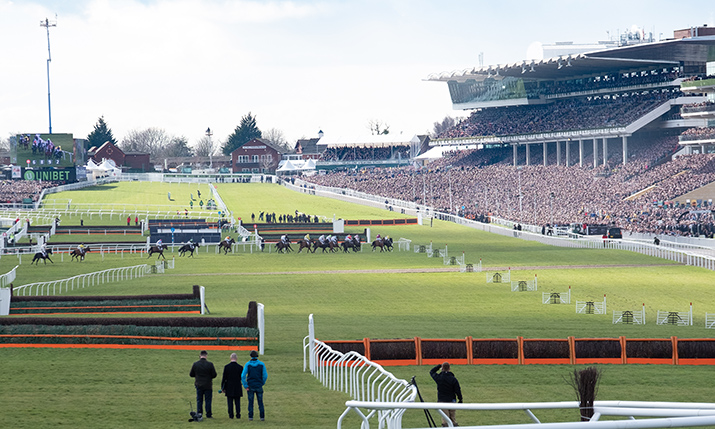 The Cheltenham Festival, as it would normally look, with the stands packed full of spectators.

Despite a lack of spectators due to COVID-19 restrictions, ITV Sport’s live coverage of horse racing from the Cheltenham Festival still featured the famous “Cheltenham roar” on Tuesday (16 March) as fake crowd sound was added to the live shots on the first race – but that will be the only augmented audio to feature on the UK broadcasts this week.

Many sports, including football and cricket, have added fake crowd sound to live broadcasts during the pandemic in order to make coverage seem as normal as possible for viewers while matches and events are played behind closed doors.

The Cheltenham Festival, one of the UK’s most popular meets, usually attracts 200,000 fans across its four days and is noted for its atmosphere, including the”Cheltenham roar” which refers to the large noise that the crowd generates as the starter raises the tape for the first race of the festival.

Speaking to SVG Europe ahead of Cheltenham, ITV Sport senior director and major events executive producer Paul McNamara, when asked what he will do to compensate for the lack of crowd and atmosphere this year, revealed that sound from a previous festival mixed with audio provided by viewers on social media will be added to the start of the first race as a homage to normality and “as a bit of fun”.

He said: “I’m going to put the Cheltenham Roar on. Because you know, why not? People will be roaring at home. It’s a staple [of the Cheltenham Festival].

“It’s a sort of note to say: “don’t worry guys, we know, you’ll be roaring at home and we’re roaring with you. It’s a bit of fun. Nothing more than that, really.”

“The commentator will pause [for the roar] as he always does on that the opening day and then we get on with the business of covering horse racing. It will be a doff of the cap to hopefully happier times.”

“We live in a bit of an imaginary world now,” he continued. “We just imagine what it would be like to be there. They put crowd effects on the football when a goal goes in. So why wouldn’t you? I am not going to put [fake crowd] on every race but for the opening of the festival, yes. It’s a homage to hopefully happier days. So it’s a sort of note to say: “don’t worry guys, we know, you’ll be roaring at home and we’re roaring with you. It’s a bit of fun. Nothing more than that, really.”

The short audio clip was played out as planned at 13:20 at the start of the first race with the commentator stating “some traditions are too good to leave at home.”

The Cheltenham Festival is part of the National Hunt racing calendar and includes the Gold Cup, a Grade 1 chase race, run over 3 miles 2.5 furlongs with 22 fences, that is considered the most prestigious race of the Jumps season.

SVG Europe will provide further information on ITV’s Cheltenham Festival broadcasts later this week, including details about the remote production workflows being used and the addition of a new specialist camera.