Editing, media management and graphics remoted out to operators’ homes

Two weekends ago ITV Sport resumed live horse racing with all presenters at home and a remote production in place for races from Lingfield, Newcastle and Newmarket. Last week brought the high-profile Royal Ascot meeting with lead presenters Ed Chamberlin, Francesca Cumani and Jason Weaver safely distancing back in the paddock and other colleagues presenting from zones around the racecourse.

The ITV Sport production team has left no stone unturned to present the best possible show in the safest environment, and there can be no better illustration of how much coronavirus has changed the landscape than the fact that this was the first year the Queen did not attend the annual Royal Ascot meeting in her 68-year reign.

Challenged with connecting a distributed presenting team and production crew across ten locations two weekends ago, facilities partner NEP made use of low latency encoding technology and bonded networking solutions to deliver a secure platform capable of real time communication with robust and reliable contribution facilities.

However the production hub, two weeks ago and last week, was the Equinox truck, built for the 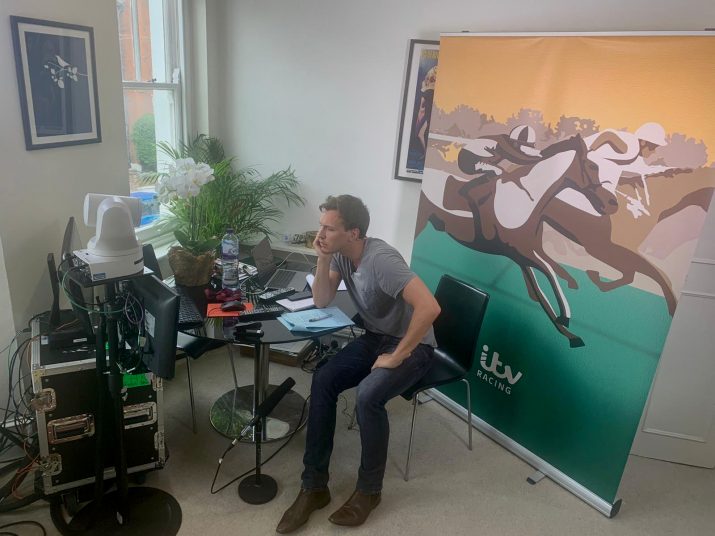 ITV Racing presenter Olie Bell at his home studio for the first weekend of racing, from Lingfield, Newcastle and Newmarket

bespoke needs of ITV’s horse racing coverage. Based at Royal Ascot throughout, Equinox provided the firepower to drive the first weekend’s distributed remote production, and of course did not need to be de-rigged following that groundbreaking first weekend of live racing before being pressed back into action for the Royal Ascot OB.

“For the first weekend we had to look at the constraints of the racing venues,” said Pearce. “Our thinking was around creating a hub — a safe hub. That would be the place we actually present from, and it would have the traditional connectivity of a main and a backup feed out to ITV Presentation.

“We would try to hook on remote elements from there, connected via the internet. The big problem is the internet, and whatever you put on there you need to back up — or be prepared to lose.

“That was our planning,” said Pearce. “We went through every little element and worked out how to back it up. We wanted to be able to keep that core working so if we lost the director, editor and PA via the internet we had someone at the hub who could take over.”

“Equinox is our established set-up for horse racing coverage,” said Harris. “When we put this proposal and plan together we didn’t know what was in front of us, other than the fact that Royal Ascot was going to happen in the middle of June, more than likely behind closed doors. We very much wanted to get our foot in the compound here and get this ‘hubbed infrastructure’ in place.

“The timelines fell into place in that we could introduce a remote hub approach for the first weekend’s racing, while at the same time rigging Royal Ascot here with all the cameras. And it has now been deemed appropriate, we can now bring the presentation team to Ascot and have them on site.

“The schedule for horse racing doesn’t contain much slack,” said Harris. “There are 94 programmes a year, so you’re never more than five days away from your next OB.

“We’re quite adjusted to the fact that we’re going from one event to another – and efficiency is the key to all of this. A working environment with a hub approach was the best option really, rather than trying to build it from the ground up.”

Three timing planes in place for contribution and production

“For the technical approach we took some inspiration from the world of esports,” said Bass. “Within an esports environment the players need to compete real time, and latency is critical. But you still have to broadcast that.

“So the original concept was that we could backhaul each presenter to a hub, create a multiviewer, and send them a return feed. But even on the best low latency encoding you’re still talking – ballpark — one second in each direction plus a little bit of processing.

“We knew we needed to do something different. We set up a couple of different timing planes. 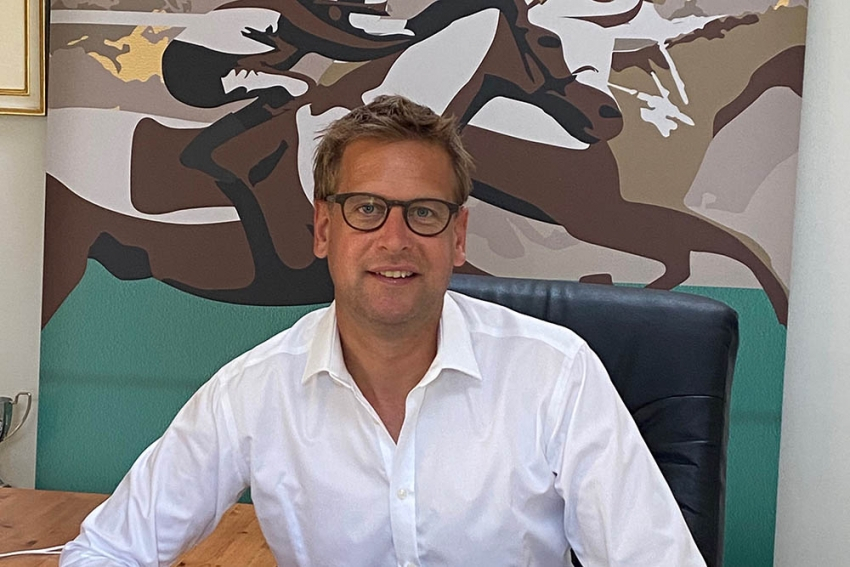 Ed Chamberlin, ITV Racing presenter, at home for the return of racing

“To ensure real time we used cloud mixing and cloud video conferencing tools, and that basically enabled all the talent to communicate in real time with visual cues, nods and thumbs up – and they had open talkback into each other’s ears to create mix-minus feeds. That was challenging enough in itself, creating all the different audio feeds – Jon and the team in the truck did a fantastic job QC-ing and bringing it all together,” said Bass.

“And then at the next level we took discrete feeds of all of the individual cameras and microphones and took them to the truck. So the hub probably operates on a slightly different timing plane of about a second behind the real time comms, but it has proven not to be an issue because as long as the talent can communicate in real time in their world and get fed the cues, contributed sources and VTs from the truck, we can create this discrete mix out of the truck and produce it.

“And there’s a third timing plane to factor in. You’ve had the contribution side up to now, but the production side is also something of a feat of engineering, in that it’s using low latency encoding to take multiviewers and program feeds out of the truck and send them to seven or eight different pods around the country for different shows. So that’s low latency encoding going out with different multiviewers and program feeds, at the same time ensuring they’ve got full talkback,” said Bass.

“Connectivity and communication is key to this workflow ” said Oldham, “We spent a lot of time getting it right in testing and that gives you a platform to build on. We are working for a BAFTA award-winning production team and once confident in the technology they start pushing the boundaries of what is possible – like inviting every owner in a race to a Zoom party so we can be part of their celebrations if they win.

“We knew whatever we built shouldn’t limit their imagination or the technical possibilities to put in the right backbone to support those ideas. And we were starting from scratch. It was good to be able to tackle the challenge, and the NEP guys delivered,” said Oldham.

“And I think one of the key things is we wanted to make people feel they were in a serious TV work environment,” said Harris. “For PA Vicky Andrews at home, for example, as soon as she sat in with the monitor and talkback panel and confidence call of all the other people she would normally sit next to, she said ‘this is like being in the truck’. It felt purposeful.

“We are remoting the production into people’s homes. I’m pleased with what we’ve delivered.”

Every OB will have an SRT screen with multiviewer and talkback

“That opens up a whole host of possibilities, and by opening up those possibilities we can pick and choose what services to run on that remote end, because we can create the appropriate VLAN tunnel all the way out. Whether that’s PTZ control for our camera, or router panel, or talkback matrix – whatever way you want to go you’ve got that whole suite of possibilities.

“The brief for Royal Ascot this year was to try to get as many crew off-site as we could,” said Oldham. 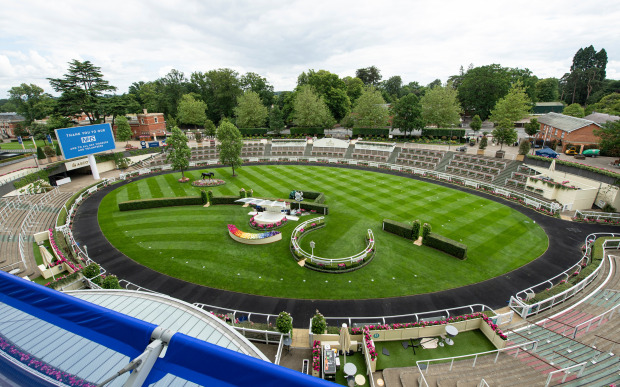 View of the paddock at Royal Ascot last week

“Normally we would have 44 cameras 17 of them RF, with wirecam, tracker cam, car mounted jib, drone, jockey cams and tower cam. That is scaled back this year due to lack of crowd and BHA restrictions and we have remoted operation of our edit, media management and graphics to operators’ homes.”

“As soon as we get through Royal Ascot week we’ll look at what will happen in July and beyond,” said Harris. “There are challenges all the time, which is great. But we’ve got this adaptive model, which enables ITV and ourselves to tailor it depending on what we are or are not allowed to do.

“It’s essential to make everyone comfortable, as it is a different way of working. We wanted to ensure that it was familiar to them and give them that confidence,” said Harris.

“One of the things going forward is that almost every OB will have an SRT screen with a multiviewer and talkback,” added Bass. “A lot of execs won’t want to go to site now. For all jobs going forward there will be an expectation, ‘how do I just watch the multiviewer?’ Especially if you have multiple OBs happening at the same time.

“You could sit in your command centre and communicate across the different productions and keep an eye on everything. That’s something that is not going to go away. The days of driving to site and sitting on the back desk, maybe chipping in one or two comments during the day – you can do all of that remotely now.”