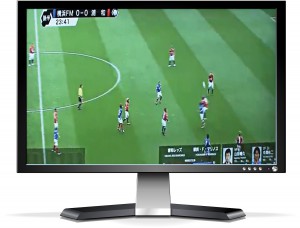 ChyronHego has announced that the J.League, the top division of the Japan Professional Football League, has rolled out the ChyronHego TRACAB system to provide advanced player tracking capabilities for all 18 J.League teams and venues. TRACAB will cover more than 300 J.League matches during the current Japanese football season, which launched March 3.

A joint project of the J.League, J.League Media Promotion, and Japanese sports data collection and analysis firm Data Stadium, the TRACAB deployment uses ChyronHego’s patented image processing technology to identify the position and speed of all moving objects on the pitch, including players, officials, and the ball. An array of portable optical cameras installed at the pitch captures live and highly accurate X, Y, and Z coordinates of each viewable object at up to 25 times each second. Data Stadium supplies this data to J.League teams to help them analyse player speed, ball movement, distance between players, and other key factors that can help improve player and overall team performance. The data can also be used to enhance the viewing experience for fans in the stadium, as well as broadcast and online audiences, enabling real-time animation that precisely recreates player movements for “instant virtual replays”.

“After the success of our early deployments at select J.League venues, we’ve concluded that ChyronHego’s TRACAB is the industry’s most comprehensive and non-intrusive real-time player tracking system. Therefore, it makes perfect sense to roll this system out to the entire J.League ecosystem,””said Takao Konishi, president of J.League Media Promotion. “The TRACAB installation presents an exciting new revenue opportunity for the J.League as new groups of stakeholders — such as sponsors, broadcasters, and other media — discover the data’s potential for enhancing fans’ experience. Plus, the player tracking data is invaluable for football clubs and coaches looking to boost their own team performance and gain insight into their competing teams, as well as player scouting activities, both here in Japan and internationally.”

In addition to the J.League, TRACAB is installed in over 125 arenas and is used in more than 2,000 matches per year by the Swedish Premier Football League, English Premier League, German Bundesliga, Spanish La Liga, and many more sports federations around the world.

“Our TRACAB technology spans almost a decade of continued development and deployment in some of the world’s most demanding live sports environments,” said Ian Wray, sports industry director, ChyronHego. “The J.League deployment illustrates just how versatile TRACAB can be, not only for providing performance data to sports clubs but also as a potential new revenue stream for a variety of stakeholders. It’s exciting to watch this technology mature and grow as the defining standard in live sports tracking worldwide.”