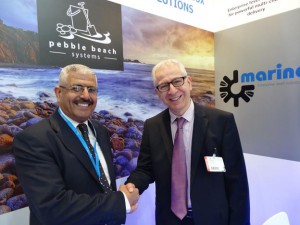 Announced at CABSAT in Dubai, Jordan state broadcaster JRTV has implemented a Pebble Beach Marina automation solution to handle ingest, content management and playout at the broadcasters headquarters in Amman. The broadcaster went on air with two channels under Marina automation control at the end of February 2015, with the system supplied by local reseller AVC Al Waseet.

Pebble Beach Systems has a large installed user base in the Middle East, and has developed many region-specific features for its automation and channel delivery products, including dynamic graphics control with Arabic text, fast turnaround compliance workflows, and the facility for broadcasters to easily manage prayer breaks in their schedules.

Samir Isbaih, Pebble Beach Systems’ Regional Manager for the Middle East, said: “This system replaces a legacy analogue and tape-based infrastructure which has been in place for over 28 years, and the project is a great showcase for both the determination of the Pebble Beach Systems engineering team and the flexibility of the product.

“In spite of the considerable technical jump, the PBS projects team has been working closely with JRTV to ensure they had the confidence to take the system on air within a short timescale.  The system is shortly to be expanded with a third channel.”