Joshua vs Povetkin first up for DAZN’s new US service 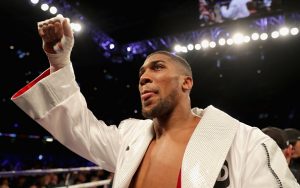 Heavyweight boxing world champion Anthony Joshua’s fight with Alexander Povetkin on 22 September will be the first bout shown live on DAZN’s new on-demand and streaming service in the US.

As part of parent company Perform Group’s $1 billion joint venture with promoters Matchroom Boxing, the Wembley stadium battle for the WBA, IBF and WBO titles will kick off a series of fights on DAZN US that will also include the World Boxing Super Series and mixed martial arts matchups from the Bellator MMA stable.

“When you get DAZN, you’ll get all the fights; we won’t stash our best matchups for PPV, linear TV or a higher-tier package. And you’re going to get the entire card live, no matter the time zone and without constraints for one affordable price.”

The MMA Welterweight Grand Prix is among the events due to air on DAZN in the US. The tournament begins with Douglas Lima taking on Andrey Koreshkov as part of the “Bellator: Mousasi vs. MacDonald” event on 29 September.

Other fights in the tournament include Jon Fitch vs. Neiman Gracie and Ed Ruth vs. Yaro Umasov.

All fights streamed on DAZN US will be available both live and on-demand, on various connected devices, including smart TVs, PCs, smartphones, tablets and game consoles.

The Perform Group said that it has “ambitious plans” to expand its portfolio of sports as more rights become available.

DAZN is currently available as a multi-sport service in Germany, Austria, Switzerland, Japan and Canada. It will launch in Italy in the coming weeks.

The US service launches on 10 September.