Jyske Bank prides itself on its innovative corporate culture – and rightly so. Back in October 2008, Jyske Bank was the first bank in the world to open an internet-based TV station – jyskebank.tv. 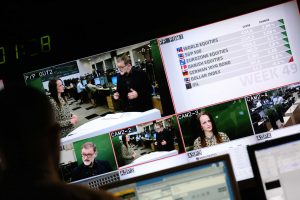 Every day, this station brings financial news and in-depth economic programmes, along with informative and entertaining journalistic features from Denmark and abroad, all created using Avid systems. Jyske Bank decided to invest in Workspace Backup from Marquis Broadcast after a rather unfortunate RAID service error on their Avid ISIS a few months back, which meant they lost some of their media. This new Workspace Backup system is now being used to take daily backups of Avid work-in-progress, as part of Jyske Bank’s disaster recovery systems.

The online channel, which is wholly funded by the bank, acts as a container for its large back catalogue of content. Technical Manager, Lasse Kristensen, explains the company’s current workflow; “We use an Avid Interplay system, along with Avid ISIS, with six Avid Media Composer offline editing suites and eight Avid Interplay | Assist desktop video workstations.

Everything had been running beautifully on Avid Interplay since the launch of the channel, right up until we started talking about getting a backup system, at which point a RAID disk broke down! When it was repaired, the wrong disk was removed, which rendered the RAID data useless – this is why we looked at Workspace Backup from Marquis Broadcast as a solution.”

Workspace Backup is a powerful disaster recovery and business continuity tool, designed specifically to protect Avid shared storage systems. It uses detailed analytics of Avid workspaces to ensure the highest levels of integrity of Jyske Bank’s backup, ensuring the most crucial projects can be immediately and individually recovered to production in any location that can see the backup.

“Our workflow hasn’t changed with Workspace Backup in place but we know we’ll be covered if we have another failure or if a user deletes something by mistake,” Lasse comments. “Workspace Backup is aware of our whole structure and tells you what media is available. It also checks the data structure and tells you if something is wrong before it’s too late. With our Avid systems and Workspace Backup working together, we can be certain of the integrity of our media backup, plus we can retrieve files quickly if needed. It’s an essential part of our operation.”

Jyske Bank’s Avid work-in-progress is backed up to local NAS, with simple navigation tools allowing its Media Composer editors to visualise and navigate into any version, project or bin in the backup. Workspace Backup is also Avid-certified, delivering Avid’s seal of approval that it operates seamlessly within the Avid environment.

Jyske Bank has a communications department of 26 people, who run the online station alongside the bank’s other internal and external communications, bringing fresh news and content to viewers during the bank’s business hours. 15 of these people form the television crew, including six journalists, three camera operators, two producers, a graphic designer, a social media manager, a production planner, along with technical manager, Lasse. “As we don’t have to fill a specific schedule, we can produce content to the length that we feel it deserves, rather than having to cram it into a 5-minute slot,” Lasse adds.

“Years ago, we used to produce a printed magazine, which we’d mail out to our customers directly, but we had to cut down on costs – it was actually a better use of resources to invest in our own online channel and we feel it’s well worth the budget. Our team of journalists always leads with a good story; we produce the content that best illustrates this to our viewers.”

Jyske Bank is also involved with sponsorship of sports teams, but much more so than just paying for a logo on a shirt. “We often provide graphics for their shows, run live streaming of matches, or perhaps set-up a TV studio at their events for interviews,” Lasse says. “We’ve even produced short commercials for television for teams, which results in plenty of media and projects for backup. Jyske Bank enjoys building great relationships with its customers, which ultimately results in more interesting content and a better customer story for our viewers in the process.”