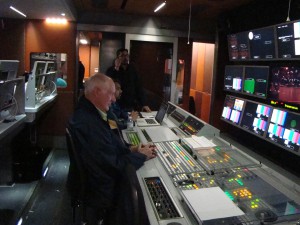 Inside the PCR during the WKL tour

In today’s multi-channel, connected media world there are very few sports that do not have some kind of television profile. As strange as it may seem, kabaddi, among the most popular and widely played of games, has managed to avoid the blanket TV coverage.

That incongruous situation changed dramatically this year with the formation of the World Kabaddi League (WKL). Modelled on Indian Premier League (IPL) cricket, which has involved broadcasters showing short-form matches with plenty of action and high production values, the WKL comprises eight international teams playing against each other in 14 cities in four countries (the UK, India, Pakistan, Canada and the US).

The origins of kabaddi trace back to pre-historic times and originated in South India. There are several variations but the basic ‘international’ format involves two teams of seven, which in turn send a player – or ‘raider’ – in the opposition’s half of the court to tag as many of the defending team as possible. Points can only be scored if the raider does this and returns to his or her side without having taken a breath. This is done by the player inhaling and then chanting “kabaddi, kabaddi” during the run. The defenders have to prevent the raider from returning to the other end before he or she inhales.

“It’s a very simple game and everybody in India has played it at some time,” comments Rahul Sarangi, co-founder and director of Greymatter Entertainment, the production company behind the TV coverage for the WKL. “But this is the first time in the history of Indian television that it has been shown live.”

And there is a massive audience for kabaddi. Not only is it the state game of six Indian states, including Andhra Pradesh and Punjab, it is the national sport of Bangladesh and Nepal. It is also extremely popular among ex-patriots from the subcontinent and people of Indian and Pakistani extraction living in the UK and North America.

In the UK Channel 4 attempted to capitalise on the popularity of kabaddi by broadcasting coverage during the early 1990s, a time when the broadcaster had built up a reputation for covering less mainstream sports and leagues, including Italian Serie A football, American football and sumo. Unfortunately, kabaddi did not take off in the same way and programmes were cancelled in 1992.

With little in the way of TV history to go on, Sarangi says the production team had to work out the best way to televise the game. “Where do you put the cameras for kabaddi?” he says. “And do you shoot from a platform or not?”

To answer these questions Greymatter brought in Keith Mackenzie, an experienced freelance director and producer based in Australia who worked for BBC Sport for 15 years, as well as TVW Channel 7 in Perth and ITV Sport on F1 motor racing and the Cricket World Cup. “We think it’s come out quite well,” Sarangi observes.

Broadcasts are all in HD, with facilities provided by different companies in each country. The WKL tour started in the UK with matches at the O2 Arena in London and Birmingham’s LG Arena. These fixtures were covered by Televideo with it HD7 truck, one of the vehicles from the former SIS LIVE fleet. Various OB suppliers are used in the US, while a flight-cased system has been assembled for the Indian leg of the competition. “It is such a massive country that it is better to have a flyaway kit,” Sarangi explains.

Greymatter has specified Ikegami cameras, Lawo and Yamaha sound desks, Shure microphones and three EVS player-recorders with a XStore for the general production. “The kit has to be pretty much similar in each venue,” says Sarangi.

The World Kabaddi League show will be on the road for four months and is currently in India, with the two UK teams – Khalsa Warriors from London and United Singhs of Birmingham – first and second in the table respectively. Coverage is broadcast on Sony Six in India, Geo Super in Pakistan and PTC Punjabi in Australia, Canada, the UK and the US.