Diana Keen, production manager for all things cricket and Crufts at Sunset+Vine, made history as one of the first women admitted into the Marylebone Cricket Club (MCC) as a full member via the waiting list, which she joined as soon as the MCC deemed women admissible to the Club in 1998. Prior to Keen’s admittance to the MCC in January 2018 after a 20 year wait, the MCC had allowed female cricketers, both current and former, entry into its hallowed halls. For Keen, who has spent the majority of her career working in cricket production, this membership was worth the wait. 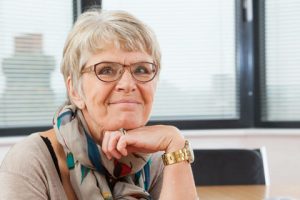 Speaking to SVG Europe over a coffee in a sunny park by Embankment tube station, Keen, who became an associate member of the MCC in 2002, talks about how her passion for cricket was sparked: “I was in the first wave of women who made it into the MCC; there were around 12 of us allowed in last January. My dad played in a little club in Chiswick, and used to take me along in my pram. I helped with the teas when I was a bit older, and my step father eventually took me to Lord’s, because he was a member of the MCC.”

This dedicated fan became this year the first non-cricket-playing woman to ring the bell to signal five minutes before the start of play at a Test match, which happened on 24 May on the first day of the England v Pakistan Test match at Lord’s.  Keen says: “I was very surprised they asked me. You could say it was a peak fan moment!”

Her career has a put a temporary stop on her visits to Lord’s to watch cricket, as for almost a quarter of a decade she has covered the matches at the ground, and globally. Keen comments: “When I began my career I stopped going to Lord’s to watch because I started working on cricket, as well as other sports, when I was at Sky back in 1991. My love of cricket helps keep me focused. It helps to be interested in what you’re doing and working in. If you want to produce or direct and make programmes about sport, you have to know and understand the sport.” 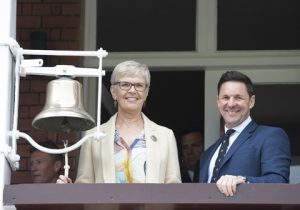 Diana Keen, MCC member, rings the bell at Lord’s on 24 May on the first day of the England v Pakistan Test match [Credit: Matt Bright}

As well as a focus on sport, it helps to be willing to work hard if you want a career in sports production, Keen notes: “It’s about getting that first opportunity. We get loads of people at Sunset+Vine coming in on work experience or who join at the bottom; you’ve really got to go the extra mile in the beginning.

“This industry can look glamorous, but you know the money won’t be great at first,” she warns. “If you want to be a runner, you have to be the best runner and hope someone gives you an opportunity. Our head of cricket started as a logger for Channel 4 and now he’s head of cricket at Sunset+Vine [Dylan Jane]; it is possible.”

Keen has worked on cricket television coverage around the world for ESPN/Star Sports, Channel 4, Channel 5, Sky, BT Sport and the International Cricket Council, spending her entire career working in television.

Keen began her career at the age of 19 in the secretarial pool at the BBC. She was only in the pool for one week before a job came up on the children’s classic, Jackanory. She continues: “I wanted to train to be a production assistant, but I was too young, so I went to Australia for six months, but stayed for seven years. While in Australia I trained to be a production assistant. Then I came back to the UK and worked for ITV in Birmingham on news and other things, before moving into outside broadcast which covered sport, as well as any other type of outside broadcast.”

The way in which television worked at that time was different to now, with few freelancers and employees based regionally rather than nationally, Keen says. “It was very regionalised then; the unions were very strong. Then ITV won a major athletics contract in the 1980s and wanted to change things by setting up a central unit, based in London. People came from various regional ITV companies to work in that unit, including myself. I went in as a production assistant.

“When Sky Sports started in Osterly, I moved on to work there as a production assistant initially, then I moved into directing and producing,” she adds. “As Sky had started a channel the opportunities were there to move around. Even today, if you want to move into sports TV, Sky is a very good place to learn.” 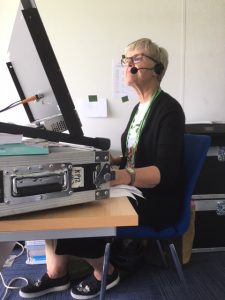 Following a colleague she used to work with, Keen then spent two years working for ESPN/Star Sports in Singapore in the late 1990s on both cricket and Formula 1, once again producing and directing. After two years she moved back to the UK and joined Sunset+Vine when they began to produce Channel 4’s international cricket from 1999.

“I’ve been at Sunset+Vine ever since,” she says. “I started as a freelance, then moved to permanent staff in 2001. When the Channel 4 contract finished, we started a contract with Channel 5 for free to air cricket highlights during the English summer international season. I’m a production manager, but I do a bit of producing and the like to keep my hand in. I work on the majority of the cricket that Sunset+Vine do, such as the Australian cricket for BT Sport, and host broadcaster feeds for all ICC tournaments, such as the World Cup down to the Under 19 Championships. Oh, and Crufts! I work at Crufts every year!”

Sunset+Vine is a good place to work, Keen notes: “Everyone says they enjoy working at Sunset+Vine because it’s like a big family. The company is very loyal to its staff and we get very good commissions, like BT Sport’s cricket and rugby, the Paralympics for Channel 4 in London and Rio, and we were host broadcaster for the Commonwealth Games in Glasgow.”

Keen has seen the role of women evolve gradually since she began working in this industry. She concludes: “It’s changed in my working lifetime for women in sports production, an awful lot. Women get a lot of opportunities, but they probably have to be better than the men in many cases. But it’s all changing; we’ve got women that produce just about anything now. There are more women coming through now; it’s just a case of being given the opportunity to show you can do the job.”