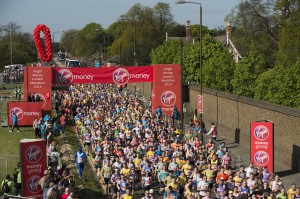 Since the London Marathon started in 1981, close to one million runners have taken part in the now familiar event around the streets of the capital city. With its establishment among the major events in the sporting calendar, the London Marathon is seen on television in almost 200 countries internationally.

Of course, any event that covers somewhat over 26 miles means a huge undertaking when it comes to the televised coverage, and this year – as last – CTV Outside Broadcasts will provide the facilities for the BBC on 26 April.

“The biggest challenge to cover the event revolves around logistics,” reveals Greg Livermore, CTV’s unit manager for the Marathon. “While it is months in the planning, and it is now a well-oiled machine, apart from the start and finish we can get very little in place as far as equipment and vehicles are concerned until the day of the Marathon.”

The reason is all too obvious. With the race taking part along public thoroughfares, cranes, jibs and trucks cannot be positioned while traffic and pedestrians still have the right of way. As a result, Livermore and his team cannot get many of the facilities in place until the very morning of the event.

“We start moving into position at 6am – just about three hours before the race starts. It’s all be done before and the planning is such that everyone knows where they have to be and gets there ready for set-up.”

Livermore goes on to explain how the broadcast works. “We have several outside broadcast units around the course – the start at Blackheath, of course, the Cutty Sark in Greenwich, then Canary Wharf in Docklands. The Tower of London features heavily and then outside Parliament at Westminster and the finish near to Buckingham Palace.”

In addition to the fixed positions, there are five HDC-1500 cameras, handheld with stabilising lenses on five motorcycles. There are also two helicopters providing constant coverage. In all, a total of 35 cameras will be used for the coverage.

“This year we are introducing a Hi-Motion Super Loop radio camera at The Tower, which will be handheld and working via Radio Link. We used a similar camera last year, but in a fixed position with a big lens. Going handheld this year we will get more involved in the action – seeing footsteps in big close-up, for example. This is quite exciting and something that the Marathon has not seen before.”

Livermore says that there are plans to use a Steadicam mounted on a Segway at the finish of the race. “This will enable us to improve coverage from the end of the railcam supplied by Aerial Camera Systems to the finish line. In previous years, this has been a dead spot of about 20 metres after the mobile cameras have peeled off from the course. Having the Segaway will also allow us to provide additional coverage at the back of the finish area.”

Signals from all the scanners will be linked back to the main control point at Canada Gate, close to the finish line. Here CTV will deploy three scanners for various functions. Alongside the one responsible for covering the last section of the race, another is designated as the ‘master control’ for the domestic broadcast, while the third handles the international transmission.

“The overall producer in the domestic master control truck not only co-ordinates the input from the other scanners, he also has access to the pictures from the mobile cameras so they can be used when the race is outside areas covered by each production truck,” reports Livermore. “Naturally, with such a long event in terms of distance, those mobile cameras are vital for continuous coverage.”

He continues: “The international master control producer has access to all the feeds and can use the mobile shots when, for example, a BBC presenter is doing an interview for the domestic programme. Non-branded graphics are also inserted from this scanner.” 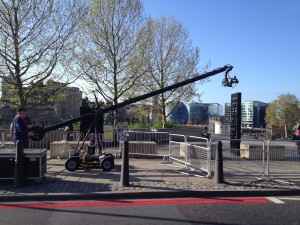 Preparing for coverage outside the Tower of London.

“One of the early hurdles we had to overcome was how do we establish reliable communication between all of the sites and the various scanners at Canada Gate,” states Livermore. “The start is a field in Greenwich, so there is no infrastructure available. And the same is really true of the other locations where the trucks are sited. We had planned to do comms using IP technology over satellite, but the problem with that was the delay, and I wanted to establish contact with the OBs before the links were up and allow producers to talk to each other. So we ended up back with reliable ISDN lines provided by BT all the way around the sites. At the moment, it is the best way of doing comms in this kind of situation.”

Up in the air

The signals from the helicopters and the motorcycles are handled by Broadcast RF (BRF) on behalf of CTV. “We provide the cameras, but BRF handles all the links including dealing with the aircraft and the bikes. The signals are relayed back using a fixed wing aircraft,” says Livermore.

Nick Fuller, the technical project manager at Broadcast RF Ltd, explains more. “The plane can fly in all weathers, cloud, fog, whatever, which is one good reason for using it. Helis need 800-1000ft clearance above ground – which means if there is fog or low cloud they are not able to fly.”

The plane in question is a similar one to that used by Tour de France and is operated by ASL, based in Antwerp. The time it takes for the aircraft to climb to its operating altitude of 22 to 25000 feet over the marathon route is about 30 minutes. There is, therefore, no disadvantage to using an aircraft from Antwerp, as this timeframe would be similar for a plane leaving from, say, Gatwick Airport in the UK.

Fuller continues: “We book it through a French OB company, AMP-Visual, as they operate a great deal in partnership with ASL and we work with Visual all the time on different projects.”

“The link equipment in the plane is from BRF. We configure it all, and build it into a rack in our workshop, and test the complete system, including the bike kit, before going to Antwerp to install in the plane. Visual provides the specialist GPS steered antenna systems as these are a permanent fit on the plane.”

Livermore goes on to explain that the production unit based at the Greenwich start position can also be used to provide signals directly into the BBC network if, for any reason, the main control centre near the finish has a problem. “This means the first hour of the event can be covered if there are any difficulties. For that reason, we have put in an additional back up commentary position at the start.”

There are no plans for surround sound to be used, although this is something that is being explored for future races. To avoid any lip-sync delay problems, the microphone output from the roving reporters is fed into the associated camera where the high powered transmitter allows the combined signal to be fed back to the appropriate scanner.

With the ever-increasing use of social media, second screen applications are important for live events such as the London Marathon. “We are not responsible for generating the graphics associated with social media such as Twitter and Facebook,” states Livermore. “All that information comes into use from a company called Mammoth Graphics and we simply feed that into the vision mixer in the domestic master control truck under the direction of the overall producer. This is a very important part of the transmission both from the BBC’s perspective and the organisers of the event.”

And talking of importance, Livermore concludes: “We recognise this as a sporting event of national interest – like the Boat Race, like The Open. They come into a category that it is very important for the country to see and so this outside broadcast rightly gets a great deal of attention from us. Last year, there was brilliant weather and there were no technical problems. Although we can’t control the weather, our aim is to achieve the technical and production standard that will match 2014.”