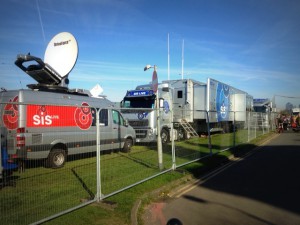 SIS LIVE Outside Broadcasts (formerly BBC Outside Broadcasts) has been involved with the broadcast of the London Marathon since it was first run in 1981. Over 32 years the company has worked with BBC Sport to enhance the programme, affording viewers at home ever more comprehensive and high quality coverage of this colourful and enthralling event. 2013’s race was no different with SIS LIVE managing the complete technical solution, which included the acquisition of pictures, the safe delivery of the programme to the BBC for transmission, and everything in between.

Race coverage from the 2013 Marathon was provided by six outside broadcast locations, four mobile cameras mounted on motorbikes and two helicopter cameras. At the finish line SIS LIVE’s OB 1 and Link 21 vehicles provided a production hub for the programme creation alongside Unit 10, which produced the finish OB.

Signals from all over the course were safely delivered via complex RF and fibre networks, managed by SIS LIVE’s comms and fibre systems teams. On a race where the fixed cameras can only cover around 4 miles of the 26 mile course the reliability pictures and sound from, and talkback to, the mobile cameras is one of the most important factors in a successful production. This year SIS LIVE used four motor bike cameras (two for the women’s race and two for the men’s) split into two different roles. The lead bikes had rearward facing camera operators on the pillion to capture close up shots of the lead runners, with the ‘follow’ bikes offering tracking shots of the chasing pack. With more than 8 hours of handheld camera work over the practice day and race day the camera crews have to be fit, knowledgeable and enthusiastic.

The 2013 London Marathon began, as usual, at Blackheath with shots of the mass of fun runners getting ready for the race, plus interviews with elite and celebrity runners. The first hour of the programme was produced from the Start OB using the OB 3 truck and a dedicated crew, all provided by SIS LIVE. Images were captured using a range of cabled and RF handheld cameras alongside mounted and hoist cameras.

The next OB location was at Cutty Sark, where the recently rebuilt tea clipper provided a new and stunning backdrop to the race action, captured by jimmy jib mounted cameras plus a 32m hoist in the grounds of Greenwich College. From Cutty Sark the competitors raced across Tower Bridge and round onto The Highway heading out towards Canary Wharf. Stationed in an area in front of the British Waterways Pumping station in the shadow of 1 Canada Square SIS 59, with its ergonomic production area and uplink along with Link 22, SIS LIVE’s specially adapted terrestrial link vehicle provided coverage of this area. Supporting the cabled Jimmy Jib and cabled cameras was a handheld radio camera to help with the elite runner race coverage, later used for interviews between Kath Merry and the fun runners. Tower Bridge once again proved to be one of the most iconic London backdrops and also represented two important milestones for the runners themselves. As they crossed the bridge they knew they’d hit the halfway point of the race, and as they crossed back under the bridge (after the Canary Wharf loop) they had just 3 miles to go. This made for some wonderful shots of runners passing both ways on The Highway as well as some inspiring interviews captured by SIS LIVE-operated RF cameras. Panoramic views of this section of the race were also captured by a camera stationed on the 9th floor of the Tower Hotel. SIS LIVE’s OB 14 and Link 18 vehicles worked in combination to process and transfer all images to the production hub at the finish line.

As the runners neared the final mile, they approached another famous London landmark – Big Ben. Here, OB 16, SIS LIVE’s compact outside broadcast vehicle with integrated uplink, captured this significant point in the race, as the runners finally began to sense that the end was in sight. The SIS LIVE camera team supported the reporters in capturing heart-warming stories and picking out famous faces as the runners strived for world records, personal bests or simply to complete the race.

From here the course made a sharp turn away from the river and up Birdcage Walk towards Buckingham Palace, where the Finish OB took over. Here two SIS LIVE OB trucks were posted to deliver the race finish coverage and an independent presentation mix which included the Finish area and roving interviews at Horseguards. The final stretch of the race was covered by a host of cameras fixed over the finish line and suspended on hoists and jimmy jibs, as well as a 125m long rail cam running along the side of the Mall.

SIS LIVE’s OB 1 produced the whole programme output including feeds from all the remote OB sites, motorbikes, helicopters and local presentation areas. In 2012 SIS LIVE also provided a special glass-fronted vehicle to enable race commentators to commentate live from site for the first time and in 2013 this offering was also extended to international commentators. SIS LIVE owns and operates the largest TV satellite uplink truck in the UK, Link 21, which acted as the major hub communication vehicle for the event. On top of the main BBC 1 presentation and international outputs, SIS LIVE also produced two specific Elite Women’s and Men’s feeds from separate HD vision and audio mixers, which went to the BBC’s Red Button and online services.

A SIS LIVE spokesperson remarks: “SIS LIVE’s crews and project managers offer huge experience across London Marathon production, having well-developed relationships with the event organisers and TV consultants. Over the years we have cultivated an excellent international reputation for providing host broadcast facilities for this event and for a number of overseas broadcasters both directly and via the BBC International unit.”