Keeping track on the high seas: how fans can interactively follow the Vendée Globe 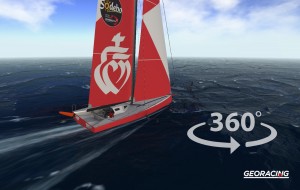 Vendée Globe is the only non-stop solo around the world yacht race without assistance. The eighth race of this challenging event, which is sometimes referred to as the Everest of the seas, started from les Sables d’Olonne in France on Sunday 6 November.

Although live broadcasting of the event is limited to the start and finish, several companies are involved in providing 24/7 video and digital steaming coverage of the race. The aim of this streaming is to provide detailed analysis of what each skipper is doing to meet the often adverse conditions.

One of those suppliers is Trimaran, a leading French provider of CGI, 3D and visual effects established by Olivier Emery more than twenty years ago. “For more than 12 years we have produced 3D effects for the Tour de France cycle race for the production company, ASO. In 2009, we decided to launch a new offering for sport and created a department dedicated to develop the Georacing solutions. Georacing is a live GPS tracking and visualisation system for outdoor sport that not only improves the media coverage of the events, but also enhances the quality of the television programmes and digital applications by including a great many statistics such as speed, gaps, timing, ranking and so on.”

So, what makes this 3D offering different to other providers? “We made the system very simple to operate during live transmissions,” states Emery. “Our ergonomic control panel allows operators to add a lot of information in real time. We have carried out a several improvements in the rendering operation, resulting in an improved quality of the graphics. It also means we are able to answer to our customers’ special requests through the team of experts who are dedicated to the Georacing product. We have seven engineers working on the project, plus CG artists capable of making remarkable images.” 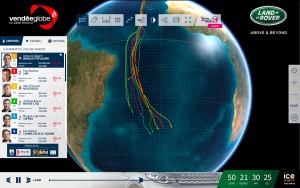 Vendee Globe graphics: Fans of the race can keep up with rankings and other details during the three-month race

Emery says that a new 360-degree system has been created and will be launched at the Vendée Globe 2016. “It’s unique, and we have worked hard to provide a new immersive and interactive 360 player that is able to simulate the navigation conditions faced by the skippers in the gruelling race. It means fans will get the opportunity to see the boats with environmental information such as the weather – we have partnerships with institutes in order to get this information, the heights of the waves, the orientation of the sails based on the real time wind direction, and whether or not the boats have foils. All the boats will be modelled in 3D with their individual sponsors logos on show.”

Using this 3D capability, viewers will be able to understand the strategies adopted by the skippers. And as there will be no live TV broadcasting of the event during the three months of race, these 3D images and interactive players are the only ways to follow the event and to stay up-to-date for the viewers.

Each boat is equipped with a tracking and assistance beacon which regularly transmits a message providing information about the boat’s location. Emery says that Trimaran provides the solutions that enable the data to be shown on both the digital App and the broadcasts.

The company that is working with Trimaran to provide the official App for the Vendée Globe event is Paris-based Netco Sports. “We work with major events around the world to create unique mobile solutions in the world of sports and media,” states general manager Stanislas de Villelongue. “These include second screen provisions that aim to enhance the viewer experience. As far as the Vendée Globe event is concerned, this is the second year we have been selected to provide the official App.”

Cedric Blanchard, the project manager at Netco Sports, explains more: “We will be providing the rankings of the race – and these will be updated six times every day. “In addition – and here’s where the main tie-up with Trimaran will take place –  there will be an official map which will show where each individual skipper is located. Users will be able to follow the boat of their choosing or all of the entrants. And the rankings will appear on the map to provide the most complete information service that is available.”

The App will also provide access to news about how the race is progressing, any medical issues which may arise, related topics and the all-important weather reports.

“Our company specialises in providing second screen and OTT solutions with its Apps. During the race, we will be offering a livestream which is taken from the live motion stream from the production company covering the race.”

The App will also include many of the usual offerings such as Social Media, on-site venue experience and so on.

Emery concludes by revealing that Trimaran’s solution for all the graphics is based on a cloud platform. “And that enables us to manage our part of the whole event remotely.”